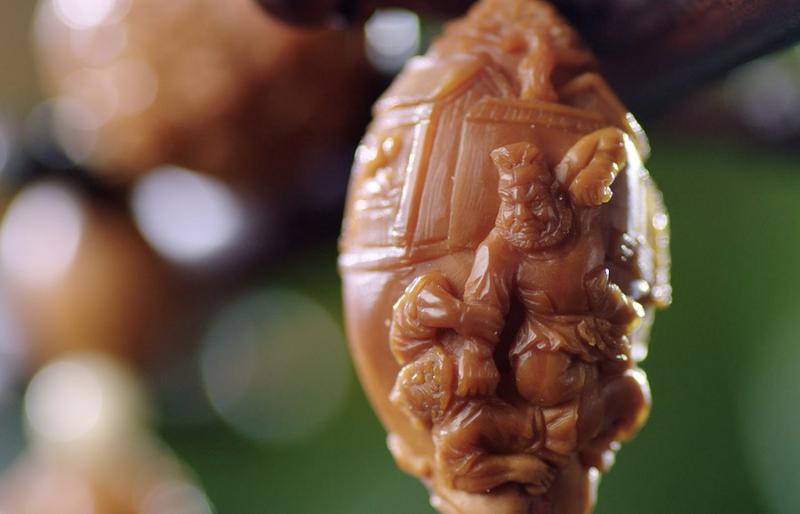 A still image of the documentary The Magical Craftsmanship of Suzhou features an olive-pit carving art work. (PHOTO PROVIDED TO CHINA DAILY)

SYDNEY－A documentary titled Magical Craftsmanship of Suzhou rolled out across theaters in Australia's Sydney and Melbourne over the weekend, giving locals a closeup look at how ancient handicrafts continue to color modern Chinese life.

The film, presented by director Sun Zengtian, explores iconic handicrafts through the eyes of 12 veterans in Suzhou in East China's Jiangsu province.

"Through the entanglement of art and people, we revealed the core of the craftsman's spirit－open and inclusive, meticulous dedication, self-cultivation, respect for nature and people, and eternal innovation," says Sun.

From detailed Song Dynasty (960-1279) silk brocades, furniture from the Ming Dynasty (1368-1644), and intricate jade carvings, the film explores how ancient tradition has continued to occupy a central role in modern-day Chinese culture.

One of the masters, Wang Xiaowen, began his journey as a lantern maker at just 10 years of age. Now 75, Wang's story, recounted in the documentary, explores how only through a lifetime of dedication can the art be truly realized.

The film also explores the conflict artisans face in the modern world where productivity and mass production edge out "dated" practices.

Caitlin Nugent, a 26-year-old teacher from Sydney, was in attendance at one of the documentary's screenings. She says she was most drawn in by the process behind silk brocades.

"The silk weaving, relating it to engineering and the mathematics behind the patterns, was really interesting," she says.

Having never been to China, she says the film added to her dream of one day making the trip.

Also in attendance was Sydney-based writer Peter Hannam. He says the film gave an insight into the importance of passing traditional skills from generation to generation.

"It seems like there's a narrow window to keep those skills vibrant, and pass them on, and to continue to recruit future generations."

In 2014, Suzhou was acknowledged as a UNESCO creative city of crafts and folk art in recognition of its continued contribution and revitalization of ancient art practices.