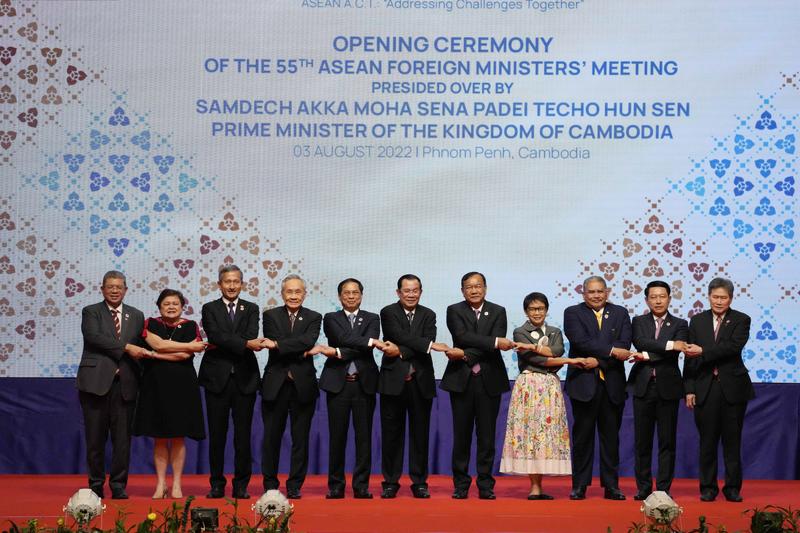 PHNOM PENH – The 55th ASEAN (the Association of Southeast Asian Nations) Foreign Ministers' Meeting and related meetings kicked off here on Wednesday, with a focus on post-COVID-19 pandemic recovery and key regional and global challenges.

Meanwhile, the Cambodian leader said the war in Ukraine has caused serious economic disruptions, exacerbated food and energy security, and threatened to divide the world once again

Cambodia is the chair of ASEAN for 2022, which groups Brunei, Cambodia, Indonesia, Laos, Malaysia, Myanmar, the Philippines, Singapore, Thailand and Vietnam.

Speaking at the opening ceremony, Cambodian Prime Minister Samdech Techo Hun Sen said the post-COVID-19 pandemic recovery, regional security, Myanmar issue, the war in Ukraine, and climate change, among others, would be high on the agenda during the meetings.

"ASEAN needs to exert its utmost care to ensure that its unity remains strong and its centrality is respected," he said.

Hun Sen said it is necessary for all ASEAN member states to pool collective efforts and combine a sense of "togetherness" to tackle the above-mentioned issues in the most effective way possible.

"Cambodia emphasizes our stance in 'unity for cooperation' and not in 'unity for confrontation'. We strive to focus on issues that bind us rather than those that divide us," he said.

Meanwhile, the Cambodian leader said the war in Ukraine has caused serious economic disruptions, exacerbated food and energy security, and threatened to divide the world once again.

Cambodian Deputy Prime Minister and Foreign Minister Prak Sokhonn said it is remarkable that foreign ministers of ASEAN and its dialogue partners are able to meet face-to-face for the first time in two years since the outbreak of the COVID-19 pandemic.

"Our gathering here today reflects the success of our collective efforts to overcome and recover from the crisis and its adverse effects on public health, social, economic and the daily livelihood of the people," he said.

Sokhonn said over the course of three days, the participants would deliberate on many key regional and international issues, especially the pressing security challenges that could destabilize regional peace and stability if they are not handled properly.