Gansu's budding skiers on a roll 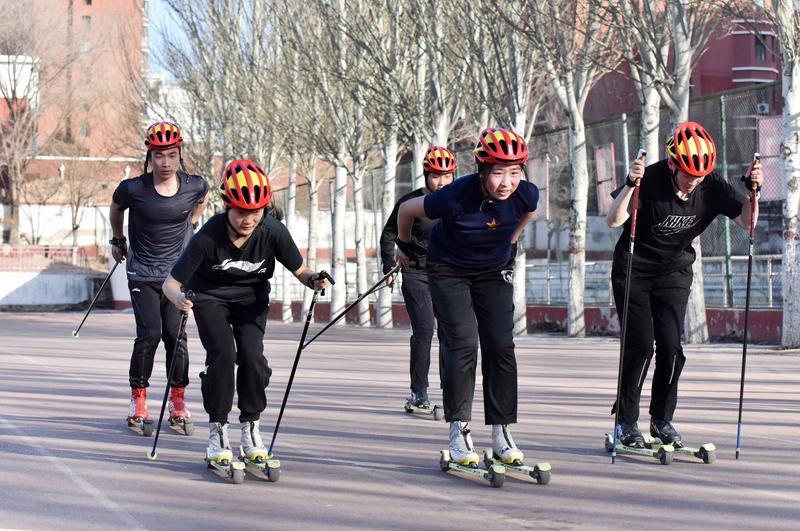 Roller skiing is an increasingly popular summer sport, and can help people hone their skills before they take to the slopes in winter. (PHOTO PROVIDED TO CHINA DAILY)

LANZHOU－With sweat streaming down his brow, Wei Wujian hunkered into a standard skiing posture to speed over the finish line. The 15-year-old from Gansu province, however, was not on the slopes but instead had a pair of slender roller skis on each foot as he raced in the blazing summer sun at his local school.

Ninth-grader Wei and his classmates are among a growing number of students to pick up roller skiing, which has gained popularity due to the rapid development of winter sports in China.

"Roller skiing is a sport for skiers outside of winter, and the movements are close to those of skiing," said Wei, who began practicing roller skiing in his first year of junior high school.

Wei was introduced to the sport by Tian Jiaqi, a PE teacher at Yucai School of Baiyin City in Northwest China's Gansu province. Tian says that kids who develop basic skills on the roller skis tend to be quicker learners when they move on to the snow.

"The helmet, all kinds of protective equipment and the slender roller skis attracted me at first," said Wei, adding that he could slide on the playground within a week thanks to Tian's tutelage.

Every Tuesday afternoon, students come to Tian's roller skiing class, which is offered as an extracurricular activity.

"Roller skiing is an effective way to practice winter sports in all seasons," said Tian, adding that children can enjoy their skiing more in winter after practicing roller skiing in summer.

At the beginning of this year, the school and Tian organized several trips for students to ski at the Gansu Baiyin national snow sports training base.

"I was very happy to see the children enjoying themselves on the slopes," said Tian.

Wei believes that he not only became physically stronger after taking up roller skiing but also improved his academic performance.

"In the competition, I gained a lot more confidence and made many friends at the games," Wei said.

Hu Lanfang, vice-principal of Yucai school, said that roller skiing has been available to pupils there since 2019, while the school has offered other sporting activities for the last 10 years.

"Students gain confidence through sports, then they can focus on their studies," said Hu, adding that Yucai school was named as a Characteristic School of Winter Sports by China's Ministry of Education in 2021.

In the months leading up to the Beijing Winter Olympic Games, China had already fulfilled its goal of engaging 300 million people in ice and snow sports. Now, more and more young students like Wei are also enjoying roller skiing.

"No matter if I can be a professional skier in the future, sports like roller skiing and skiing will be my hobbies," Wei said.

"As part of the provincial games, we hope that more people will understand roller skiing and participate in winter sports," said Zhou Jinping, director of Gansu's winter sports management center.