Urumqi seen to be a key hub on Belt and Road

By Zhong Nan in Beijing and Mao Weihua in Urumqi 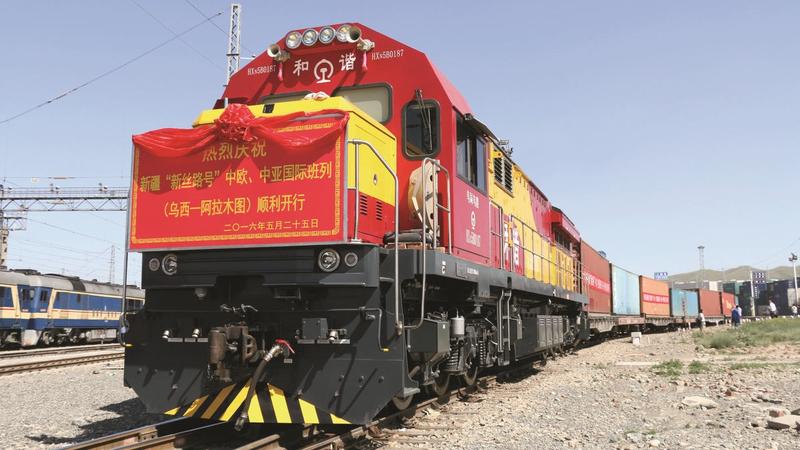 Together with these new projects, the land port area, supported by other facilities, such as a multimodal transportation center and an international express center, will help Xinjiang build a transportation and business hub in the core area of the Silk Road Economic Belt, gathering strategic resources and consolidating global supply chains, Peng said.

With a planned area of 67 square kilometers, containing the Urumqi China-Europe railway express hub and a comprehensive bonded zone, the land port area is a landmark project in the construction of the core area of the Silk Road Economic Belt.

Since its construction began in 2015, the land port area has attracted over 30 billion yuan ($4.45 billion) in investment and attracted more than 340 companies. A cross-border e-commerce project has also been established there.

The land port area had operated more than 5,900 China-Europe freight train trips via 21 routes linking 26 cities in 19 European and Asian countries and regions by June 2022. The trains carry over 200 categories of goods, ranging from daily necessities and garments to mechanical equipment and building materials, according to China Railway Urumqi Group Co Ltd, a regional branch of China State Railway Group Co Ltd, the national railway operator.

When visiting the Urumqi International Land Port Area during his inspection tour in Xinjiang last week, President Xi Jinping noted that the region has transformed from a relatively enclosed hinterland into the forefront of opening up, as the country promotes the expansion of opening up, the development of the western regions, and the joint building of the BRI.

The land port area had operated more than 5,900 China-Europe freight train trips via 21 routes linking 26 cities in 19 European and Asian countries and regions by June 2022. The trains carry over 200 categories of goods, according to China Railway Urumqi Group Co Ltd

Zhang Yanbing, a factory manager at BOS Automotive Systems (Taicang) Co Ltd in Taicang, Jiangsu province, a subsidiary of Germany's BOS Group, which supplies automotive interiors to BMW and Mercedes, as well as Chinese companies Geely and NIO in China, said that maritime transportation aside, the company has already used the China-Europe freight train service to import raw materials from Europe, such as motors and wiring harnesses, to support its production in China.

Since the opening of the China-Europe and China-Central Asia freight train services, Horgos Port and Alataw Pass, both major rail ports in Xinjiang, have recorded a combined number of more than 50,000 inbound and outbound freight train trips, according to data provided by China Railway Urumqi Group Co Ltd.

China will continue to deepen its cooperation to encourage more companies from economies participating in the BRI to join certification programs such as the Authorized Economic Operator agreements and other policy initiatives, said Wang Jun, director of the Department of Port Control at the General Administration of Customs.

Under the program, advocated by the World Customs Organization, customs authorities from various regions form partnerships with industry to jointly reduce barriers to customs procedures and enhance international trade efficiency.