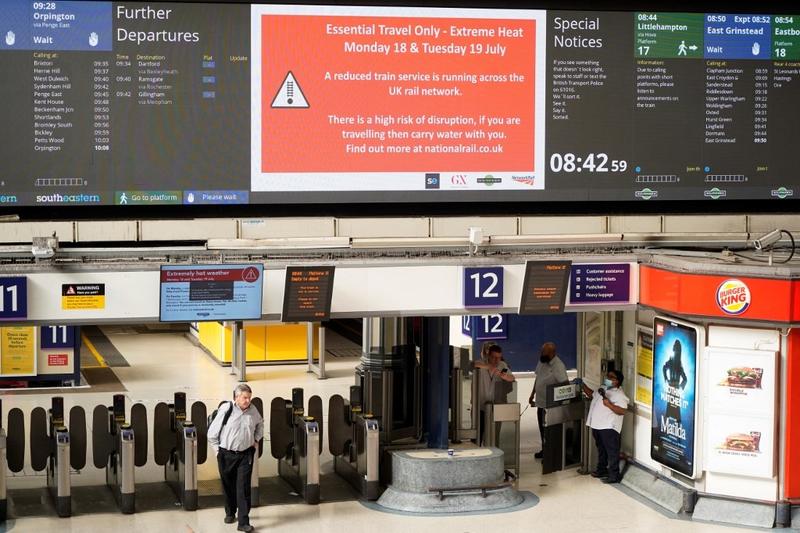 Commuters walk under a message board warning people of disruption over extreme heat at Victoria Station in London on July 18, 2022. (NIKLAS HALLE'N / AFP)

MADRID/LISBON - A heatwave sweeping southern Europe that has caused hundreds of deaths and huge wildfires in past weeks showed some signs of abating on Monday but continued to move north, including towards Britain where authorities issued an extreme weather warning.

Much of Europe is baking in a heatwave that scientists say is consistent with climate change and has pushed temperatures into the mid-40s Celsius in some regions, with wildfires raging across tinder-dry countryside in Portugal, Spain and France.

Much of Europe is baking in a heatwave that scientists say is consistent with climate change and has pushed temperatures into the mid-40s Celsius in some regions, with wildfires raging across tinder-dry countryside in Portugal, Spain and France

Temperatures in some parts of southern Europe began to ease over the weekend but thousands of firefighters across the region still battled to contain hundreds of wildfires and authorities said the risk of further blazes remained extremely high.

Spain was facing the eighth and last day of a more than week-long heatwave on Monday, which caused more than 510 heat-related deaths, according to estimates from the Carlos III Health Institute.

With fires burning thousands of hectares in Galicia, Castille and Leon, Catalonia, Extremadura and Andalusia, Spain mourned the death of one firefighter in the northwestern province of Zamora on Sunday evening. Almost the entire country faces an extreme fire risk.

"There are never words to thank the immense work of those who fight the fires tirelessly," Prime Minister Pedro Sanchez said on Sunday night in a condolence message on Twitter.

More than 70,000 hectares have burnt in Spain so far this year, the worst year of the last decade, according to official data. Last month, a huge wildfire in Sierra de la Culebra, Castille and Leon, ravaged about 30,000 hectares of land.

Spain also reported a second death caused by a wildfire after a fireman died on Sunday. A 69-year-old was found dead on Monday in Ferreruela, in an area burned by flames, emergency authorities said. Local media said it was a farmer.

In Portugal, temperatures dropped over the weekend, but the risk of wildfires remained very high across most of the country, according to the Portuguese Institute of Meteorology (IPMA).

Belgium and Germany were among the countries expecting the heatwave to hit them in coming days.

Britain was on course for its hottest day on record on Monday with temperatures forecast to hit 40C for the first time, forcing train companies to cancel services, schools to close early and ministers to urge the public to stay at home.

The government has triggered a "national emergency" alert as temperatures were forecast to surpass the 38.7C recorded in the Cambridge University Botanic Garden in 2019 on Monday and Tuesday.

"We hoped we wouldn't get to this situation but for the first time ever we are forecasting greater than 40C in the UK," climate attribution scientist at the Met Office, Dr Nikos Christidis, said. 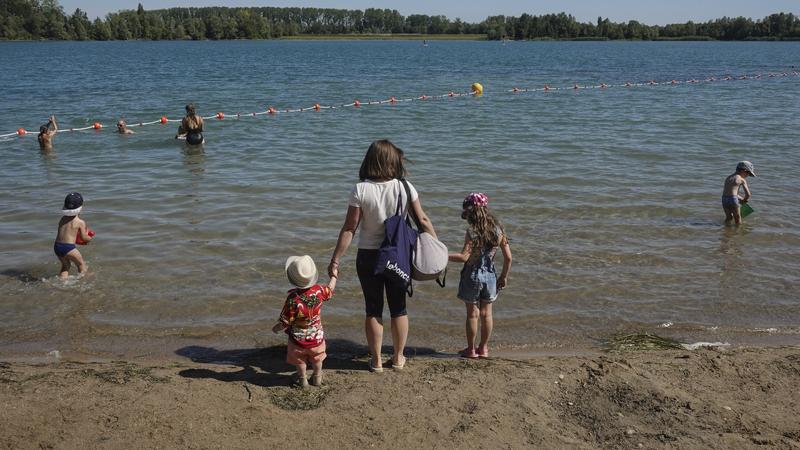 A woman and her children arrive at the Anse lake, outside Lyon, central France, during a heatwave, July 17, 2022. (LAURENT CIPRIANI / AP)

"Climate change has already influenced the likelihood of temperature extremes in the UK. The chances of seeing 40C days in the UK could be as much as 10 times more likely in the current climate than under a natural climate unaffected by human influence," he said.

In France, wildfires had spread over 11,000 hectares in the southwestern region of Gironde, and more than 14,000 people have been evacuated, regional authorities said on Sunday afternoon.

More than 1,200 firefighters were trying to control the blazes, the authorities said in a statement.

In Italy, where smaller fires have blazed in recent days, forecasters expect temperatures above 40C in several regions in coming days.

Switzerland also suffered the effects of the heatwave. Axpo, the operator of the Beznau nuclear plant, said it on Monday it was forced to reduce output so that it does not overheat the Aare river from which it draws its cooling water.