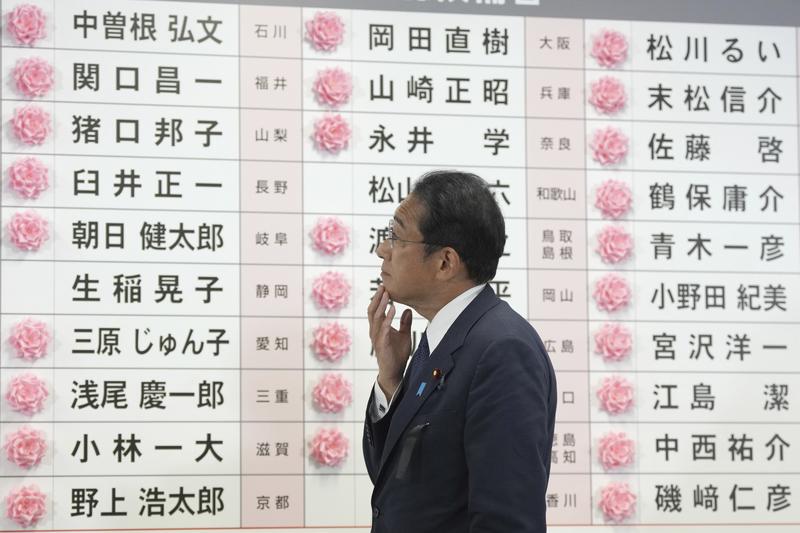 Fumio Kishida, Japan's prime minister and president of the Liberal Democratic Party, reacts after placing a red paper rose on an LDP candidate's name, to indicate a victory in the upper house election, at the party's headquarters in Tokyo, Japan on July 10, 2022. (TORU HANAI, POOL PHOTO VIA AP)

TOKYO – Japan's ruling bloc of the Liberal Democratic Party and Komeito scored a sweeping victory in Sunday's House of Councilors election, with the LDP alone securing a majority of contested seats, according to the election results published on Monday morning.

The LDP won 63 out of the 125 seats up for grabs, while its junior coalition partner Komeito snatched 13 seats.

In all, the LDP and Komeito secured a total of 76 seats, comfortably retaining a majority in the 248-member upper chamber of parliament.

The opposition Japan Innovation Party doubled its seats to 12, up from six before the election.

The triennial election, held in the immediate aftermath of the shock death of former Prime Minister Shinzo Abe who was shot by a man during his campaign speech in Nara, was a critical test for Japanese Prime Minister Fumio Kishida to assess voter confidence in the performance of his government since taking office nearly nine months ago.

The voters mainly decided on how well the Kishida government did in bolstering the country's COVID-19 response and scrambling to curb surging prices of energy and everyday items like food to ease the pain on households among other issues.

In Japan, upper house members serve six years, and half of the seats in the 248-member House of Councilors are contested every three years.

For this year's election, a total of 125 seats were contested, including 74 in electoral districts and 50 by proportional representation, plus one vacant seat in the other part of the upper chamber.