By Xu Weiwei and Yang Han 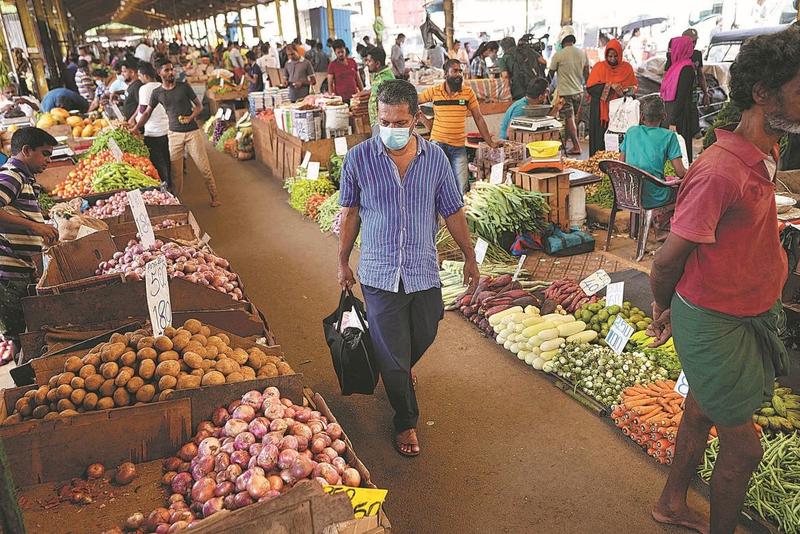 A customer shops for vegetables in Colombo. Sri Lanka's economic crisis has made many families think twice about buying fuel or food. (ERANGA JAYAWARDENA / AP)

HONG KONG – Hit hard by the COVID-19 pandemic and rising oil and food prices, Asia is experiencing a wave of inflation that will hurt livelihoods and the economy, according to experts.

The recent interest rate rise by the US Federal Reserve will likely exacerbate the situation, they said.

Rajiv Biswas, Asia-Pacific chief economist at S&P Global Market Intelligence, said, "Inflationary pressures in many Asian economies have risen during the first half of this year due to surging world prices for oil, natural gas and coal, as well as higher agricultural commodity prices.

"For companies, global supply chain disruptions are also contributing to rising price pressures for raw materials and components. Many Asian central banks have responded to rising inflation by tightening monetary policy during the first half of 2022."

A report by global financial services group Nomura said food inflation in India is expected to exceed 9 percent in the second half of this year. Economists also said India's wholesale inflation is running at its highest level for 30 years.

On June 21, the Bank of Korea said inflation in South Korea this year will possibly reach the highest level in 14 years. According to Statistics Korea, the nation's consumer prices rose by 5.4 percent year-on-year last month. Prices of agricultural and livestock products also rose sharply, with those for pork growing by 20.7 percent, while imported beef cost 27.9 percent more.

I think this is something quite ironic and surprising. Suddenly the demand for manpower has gone up in Asia, including Singapore, yet many people were not prepared for a quick recovery, and this has given rise to increased salaries.

In Thailand, inflation is expected to rise from 4.9 percent to 5.9 percent this year, the highest level in 24 years, according to Siam Commercial Bank. Thai Commerce Minister Jurin Laksanawisit said on June 16 that the country would freeze the prices of 46 items, including instant noodles, vegetable oil and canned food, for the next 12 months.

Year-on-year inflation in Laos rose to 12.8 percent last month, the highest level for 18 years, according to the Lao Statistics Bureau, with the price of fuel surging by 92.6 percent, affecting production and living costs.

However, on average, Consumer Price Index inflation pressures in Asia are still moderate compared with those in the United States and European Union member nations. This is because China and Japan, with inflation rates of 2.1 percent in May and 2.4 percent in April respectively, account for about 70 percent of Asia's total economic size, Biswas said.

On June 15, the US Federal Reserve increased its benchmark interest rates by 0.75 percentage points, the third rise this year and the largest since 1994. Lili Yan Ing, lead adviser, Southeast Asia region at the Economic Research Institute for ASEAN and East Asia, which is based in Indonesia, said the rates are projected to stand at 3.4 percent at the end of this year, to 3.8 percent next year, 3.4 percent in 2024, and 2.5 percent in the longer term.

Lawrence Loh, director of the Centre for Governance and Sustainability at the National University of Singapore Business School, said that while the Fed rise is intended to lower the demand pressure of inflation, it also works the other way around, because raising interest rates increase costs for business.

"Because the US interest rate is the benchmark for almost the whole world, if it rises, every country will follow," he said, adding that such action results in higher financing costs.

In the Philippines, the nation's central bank will raise interest rates by 25 basis points at a second straight meeting this month, according to a Reuters poll forecast.

Meanwhile, Indonesia's central bank is tipped to maintain its current rate of 3.5 percent, but more than one in four of the economists polled by Reuters expect the rate to be raised in the next quarter as the US Fed tightens sharply.

Loh said inflation levels in Asia have not been high compared with those in Europe or the US, "but of course it is something of a policy concern, as well as a concern for businesses".

He said two sets of cost factors are driving inflation. First, prices for many commodities, goods and materials have risen, especially after the onset of the Russia-Ukraine conflict. Second, wages in many economies have risen significantly because of the recovery from the pandemic in Asia.

"I think this is something quite ironic and surprising. Suddenly the demand for manpower has gone up in Asia, including Singapore, yet many people were not prepared for a quick recovery, and this has given rise to increased salaries," Loh said.

As many goods in Asia are imported from the US, he said this can be termed "import-related inflation". "For some time, prices have gone up quite a lot in the US and in Europe, so when we import things from those places, it will add to our pricing pressure," Loh added.

Robert Carnell, chief economist and head of research for Asia-Pacific at ING, said Asia is not homogenous－every country is unique－but on balance, the continent's inflation levels are lower than those in some other places, including the US and Europe. He said this is because Asia is relatively less affected by supply disruptions, including those for semiconductors, as well as disruptions in terms of shipping costs due to the pandemic.

"But one should not pretend there isn't an inflation problem. There is. It's just perhaps not as stark as elsewhere," Carnell said, adding that other factors related to the Russia-Ukraine conflict need to be taken into account.

He said one of those factors is that Asia as a whole is a relatively energy-dependent region.

"Most countries run a deficit in terms of energy, and of course energy prices have gone through the roof.…Russia is closing gas supplies to Europe, which puts pressure on the rest of the world. There's a lot of competition between Asia and Europe, especially for available sources of natural gas or crude oil," Carnell said.

He added that food shortages are also emerging as a result of the conflict in Ukraine, with a lack of wheat imports pushing up prices of substitutes, including jasmine rice from Thailand and basmati rice from India.

The relationship between fertilizers and yields could "potentially add further inflation into the pipeline, keeping prices elevated for longer", Carnell said, adding that as fertilizer prices rise, farmers use less of it, yields fall, and prices for agricultural produce rise.

In Australia, Li Wei, a lecturer at the University of Sydney Business School, said the Ukraine conflict has undoubtedly driven up commodity prices, especially for wheat and energy, as Russia is the world's largest exporter of gas and wheat, and Ukraine is the fifth-largest wheat exporter. 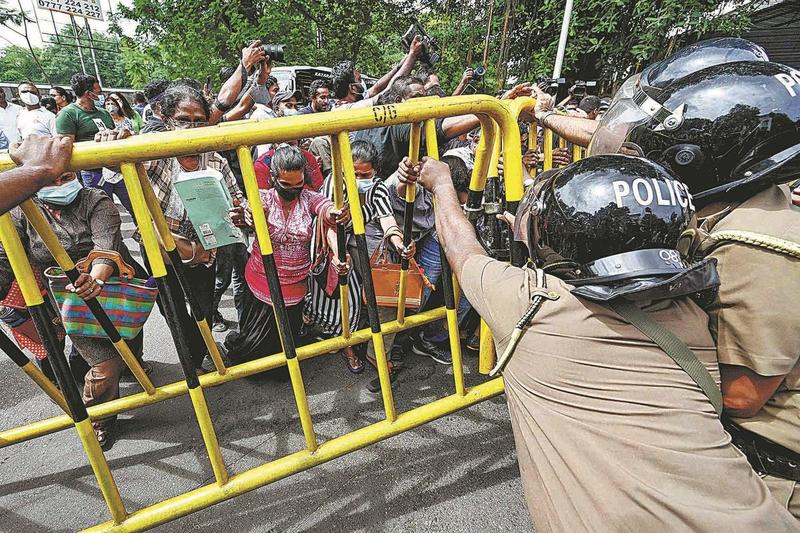 On June 8, a report by the UN said the world is facing a cost of living crisis unseen for at least a generation.

Li said, "Global inflation has been driven by quantitative easing policies (by governments such as that in the US) as well as rising commodity prices over the past few years due to global competition to invest in infrastructure, renewable energy, and defense."

She said the US rate rise will not entirely address the global inflation risk, which has to be managed extremely carefully to avoid a worldwide recession.

In Indonesia, Ing said, "The rise in the Fed's interest rates will be followed by rate rises in major developed countries, who have the largest share of global investment.

"Increased interest rates will, of course, reduce investment worldwide, and this will put developing countries who expect more investment as a source of economic recovery in a less-advantageous situation."

"Higher US interest rates for home loans, auto loans and consumer finance are also acting as a drag on the US' economic growth outlook, with the country's GDP growth forecast to moderate from 2.5 percent in 2022 to 1.8 percent in 2023," he said. "The expected slowdown in the US economy due to high inflation and rising interest rates will result in slower US demand for Asian exports in 2023."

Park Chong-hoon, head of Korea economic research at Standard Chartered Bank Korea, said the reasons for the rise in South Korea's Consumer Price Index are similar to those for such rises globally. "Rising inflation will particularly impact the low-income sector, in our view, as it will reduce real income. It will also burden the elderly," he said. 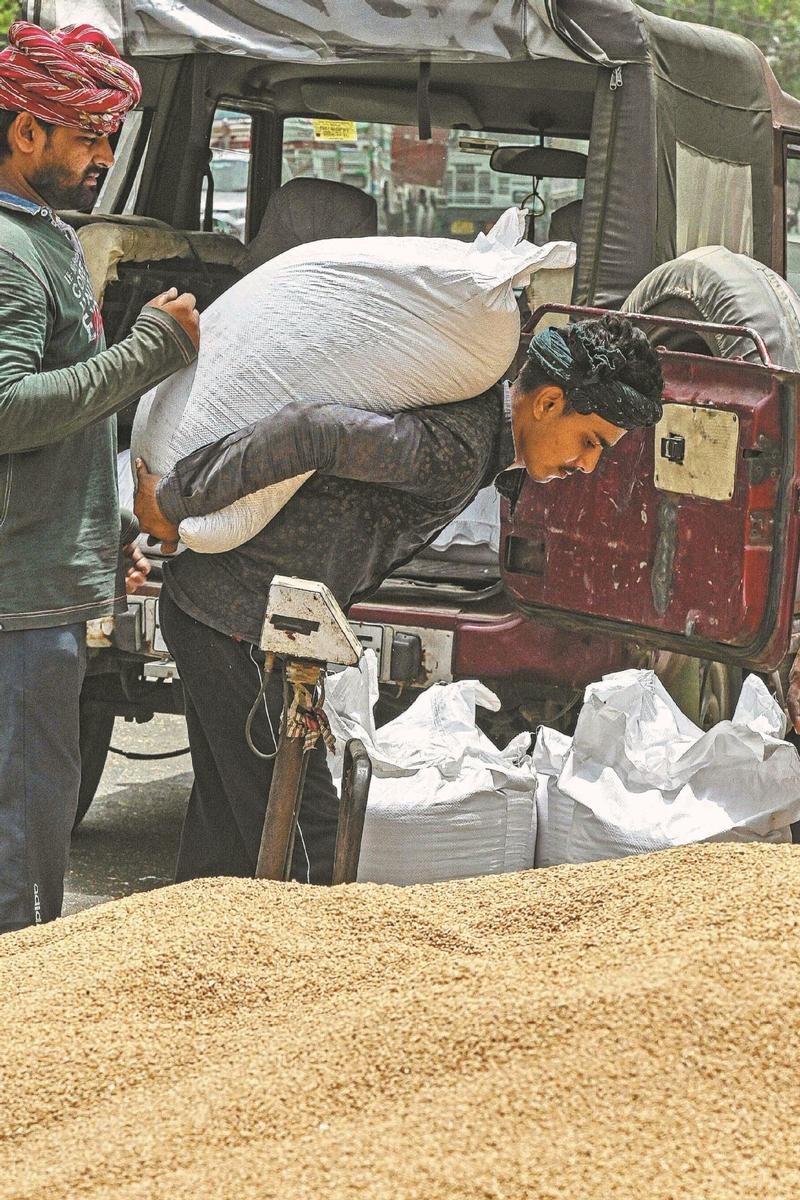 A laborer carries a sack of wheat to a customer's vehicle at a wholesale grain market in Ghaziabad, India, last month. (PRAKASH SINGH/AFP)

In Thailand, Pavida Pananond, professor of international business at Thammasat Business School at Thammasat University, said the nation is being dealt more blows with rising inflation, and it does not help that Thailand is "already among the slowest-growing economies in Southeast Asia".

"The high inflation rate will make life more difficult for the lower-income population, aggravating the pain from two years of pandemic-induced lost or reduced incomes and other economic constraints," she said.

As a country deeply integrated with the global economy, Thailand has no choice but to raise interest rates in tandem with the US and the rest of the world, Pavida said.

According to Pavida, the Fed's latest rate rise increased pressure on the Thai central bank, because a widening rate spread will pose the risk of more capital outflows from Thailand, resulting in further depreciation of the baht, the Thai currency.

The rise in the US dollar exchange rate is another factor pushing up inflation in Asia.

Sirimal Abeyratne, an economics professor at the University of Colombo in Sri Lanka, said there are three internal reasons for the island nation's surging inflation. These are: depreciation of the Sri Lankan rupee against international currencies; a shortage of basic necessities; and the significant increase in money supply in Sri Lanka in the past two years, including money-printing. "Of course, there is a global impact because prices are going up everywhere," he added.

"The rising US dollar exchange rate means higher inflation, as many major necessities, ranging from essential foods to fuel, and even raw materials for exports, are imported. With a rising exchange rate, these prices in local markets will surge," he said.

Ahmed said purchasing power is already being weakened due to inflation caused by evolving regional situations, the pandemic, and other factors. Rising prices for basic commodities due to depreciation of the local currency will further aggravate the situation, he added.