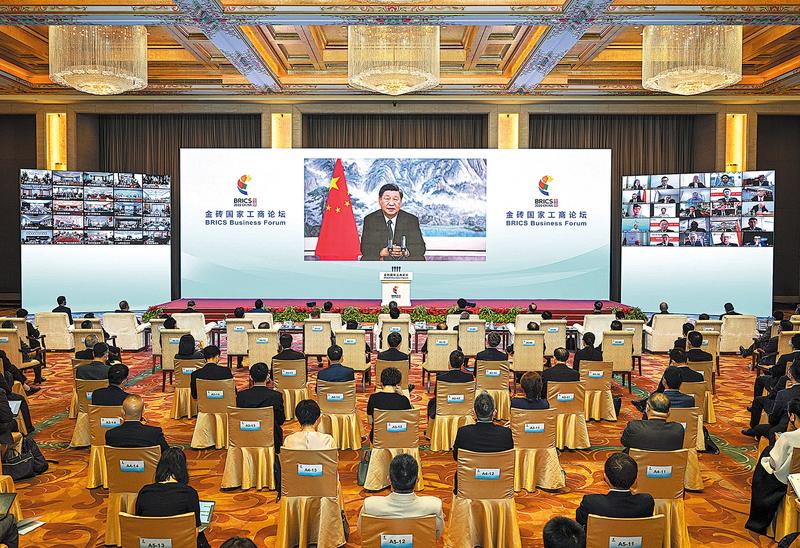 President Xi Jinping delivers the keynote speech via video link from Beijing at the opening ceremony of the BRICS Business Forum on June 22. (YIN BOGU / XINHUA)

In his keynote speech at the BRICS Business Forum, delivered via video link from Beijing, Xi also reiterated the need to implement the Global Security Initiative and the Global Development Initiative, both proposed by China, in order to realize common, comprehensive, cooperative and sustainable security and to achieve the United Nations’ Sustainable Development Goals.

Xi was set to chair the 14th BRICS Summit on June 23. BRICS, which comprises Brazil, Russia, India, China and South Africa, has become an important platform for exchanges and cooperation among the world’s major emerging economies.

Addressing the forum, which political leaders, economic and trade officials and business executives from BRICS countries attended in Beijing or participated in online, Xi expressed his concerns about the rising challenges that the world is facing, such as the COVID-19 pandemic, security problems, slow economic recovery and setbacks in global development.

“Where is the world headed: Peace or war? Progress or regression? Openness or isolation? Cooperation or confrontation? These are choices of the times that we are confronted with,” Xi said.

Offering his answers, Xi said despite changes in an evolving global environment, the historical trend of openness and development will not reverse course, and the shared desire to meet challenges together through cooperation will remain as strong as ever.

He called on all countries to rise to the challenge and forge ahead with resolve toward the goal of building a community with a shared future for humanity. The international community should embrace solidarity and coordination and jointly maintain world peace and stability.

Xi said that in the past century, humanity has gone through the scourge of two world wars and the dark shadow of the Cold War. The tragedies of the past tell us that hegemony, group politics and bloc confrontation bring no peace or security; they only lead to wars and conflicts, he added.

Noting that the Russia-Ukraine conflict is another wake-up call for the world, Xi said the crisis reminds people that blind faith in the so-called “position of strength” and attempts to expand military alliances and seek one’s own security at the expense of others will only land oneself in a security dilemma.

He urged countries around the world to reject zero-sum games and jointly oppose hegemonism and power politics. “We should build a new type of international relations based on mutual respect, fairness, justice and win-win cooperation.”

The international community should tide over difficulties together and jointly pursue win-win cooperation, he said, calling on countries to be inclusive and jointly expand openness and integration.

Saying that almost 1.2 billion people in nearly 70 countries are affected by COVID-19 as well as food, energy and debt crises, Xi called on countries to participate in the Global Development Initiative to accelerate the implementation of the UN 2030 Agenda for Sustainable Development, and to forge a united, equal, balanced and inclusive global development partnership.

He expressed his concerns about a possible world economic crisis against the backdrop that some important industrial and supply chains are suffering from deliberate disruptions, commodity prices remain high and are fluctuating, global inflation keeps rising, the international financial market is in turmoil, and global economic recovery is losing steam.

“At this critical juncture, tiding over difficulties together and pursuing cooperation is the only way for us to forestall an economic crisis,” he said.

“To politicize the global economy and turn it into one’s tool or weapon, and to willfully impose sanctions by using one’s primary position in the international financial and monetary systems will only end up hurting one’s own interests as well as those of others, and inflict suffering on everyone.”

Imposing sanctions could act as a “boomerang” and a “double-edged sword”, he said, and efforts to “build a small courtyard with high walls” were in no one’s interest.

Economic globalization is an objective requirement for the development of productive forces and an irresistible historical trend, he said, and “going backwards in history and trying to block other people’s road will only block your own road in the end”.

Xi reiterated China’s commitment to opening-up, saying the nation will continue to foster a market- and law-based, internationalized business environment.

Aparajit Chakraborty in New Delhi, the Presidency of the Republic of South Africa, Agencia Brasil and Reuters contributed to this report.