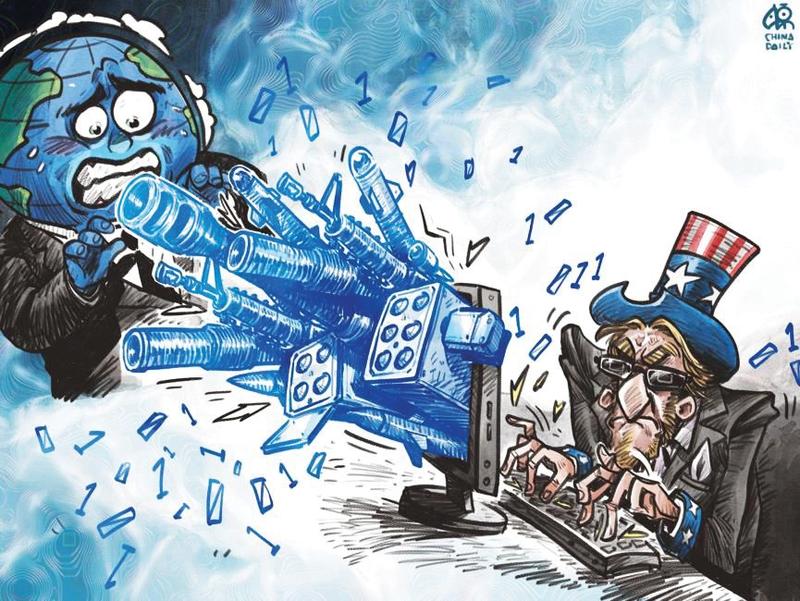 The Russia-Ukraine crisis is exposing the deep-rooted hypocrisy and self-centeredness of the West led by the United States. Lots of “fake”, “false” and fictional propaganda of the Western media and a slew of politicians have tried to distort the basic facts about the conflict.

The US has launched a campaign to use the Ukraine crisis to snub Russia and implicate China with habitual slogans and smears including those on its Taiwan and Xinjiang territories, coupled with tons and tons of US arms downloaded on Ukraine soil.

Meantime, they are skillfully crafting a campaign and a narrative which suits US geopolitical and geo-economic agenda. The Western elite use the media to spread their message, and their media outlets have been showing enthusiasm to act on behalf of them. Simultaneously, Russian media outlets and news agencies are being banned to kill any chance of difference of opinion — which the Western countries claim to protect — so that the US and some of its allies can manipulate their citizens according to their own preferences.

In reality, the campaign is nothing but brazen hypocrisy, with NATO taking on a central role. The US-led West has committed many atrocities, if not crimes, internationally, starting from colonization in the past to inhuman economic sanctioning in the modern era. NATO followed the US directive many times in recent decades in attacking countries such as Yugoslavia, Afghanistan, Iraq and Libya, causing the deaths of hundreds of thousands of innocent people and looting of their resources.

The most vexing part of the current campaign over the Russia-Ukraine crisis is that the US and some of its Anglosphere allies are targeting China for nothing, acting with sheer ulterior motives.

China is not part of this European conflict and it is actually trying to defuse the situation, in sharp contrast with the US which has kept fanning the flames of tension and division. Unfortunately, Western countries are not ready to accept this fact and are busy building a smear campaign against China.

The situation has prompted consensus among independent experts that the real purpose of the US is to keep its hegemony alive and lasting, at the cost of all interests of others. So, Washington is trying to use the Russia-Ukraine conflict to kill two birds with one stone.

On the one hand, the US has moved swiftly to isolate Russia, aiming to destroy its economy and sink its global status. On the other, the White House and its Anglo-Saxon allies are trying to frame China as an ally of Russia to build a narrative against Beijing, ignoring the Chinese diplomatic tradition of non-alignment. This kind of Western trick is not new to China, as the country has been a victim of Western harsh behavior since the founding of the People’s Republic.

First, the US-led Western countries took many years to establish diplomatic relations with China. Second, the US is continuously violating the sovereignty of China by sending warships to Taiwan Straits and selling arms to Taiwan, which has been a part of China since ancient times and which was once looted by imperial Japan.

Now the US-led West is making trouble again for China by wrongfully equating the situation of Ukraine with Taiwan. That is completely irrational, given that almost all countries in the world recognize Taiwan as an integral part of China.

Moreover, US Secretary of State Antony Blinken on May 26 tried to sell the “China threat” theory in outlining the United States’ China policy. US Customs and Border Protection began enforcing the “Uyghur Forced Labor Prevention Act” on June 21.

In this context, it can be inferred that the campaign against China has been conjured out of thin air. China, as an independent and sovereign country, has the full right to adopt any policy that can help diffuse tension and ensure peace. Beijing has endeavored for reunification with Taiwan with all possible peaceful means. And instead of a fake “genocide” fanned by Western politicians, life of Uygur and other ethnic groups in Xinjiang have been improving steadily.

Regrettably, the US has constantly made provocative moves in a bid to undermine Beijing’s efforts. The reasons are obvious. Washington and some of its Anglo-Saxon allies aspire to check the peaceful rise of China by erecting hurdles whenever possible. It is well-known that the US-led West does not like the rise of China, especially the Chinese model of development.

China is developing and becoming strong through sheer hard work and by sticking to the global norms, which is the opposite of the Western model of expansion, which was based on colonization, slavery, committing genocides of indigenous people, and robbing other countries to seize their resources.

So, by creating hurdles or framing China with Russia, the US and some of its allies hope to create a bad image of China and entwine it in the conflict so that China could be struck as well with economic and other sanctions.

Fortunately, China is not falling into the trap. Beijing is keeping a distance from the conflict and insisting on asking the parties to solve the issues through dialogue and consultations.

China’s approach is in line with its philosophy on international relations, which hinges on engagement, consultation and sharing of prosperity for sustainable peace, in sharp contrast to competition, rivalry and confrontation often initiated by Western countries. As ancient Chinese philosopher Confucius once said, “The best way to enhance international engagement and influence is to share prosperity.” The US and its allies should learn some lesson and change their ways.

The author is CEO of the Asian Institute of Eco-civilization Research and Development in Pakistan.