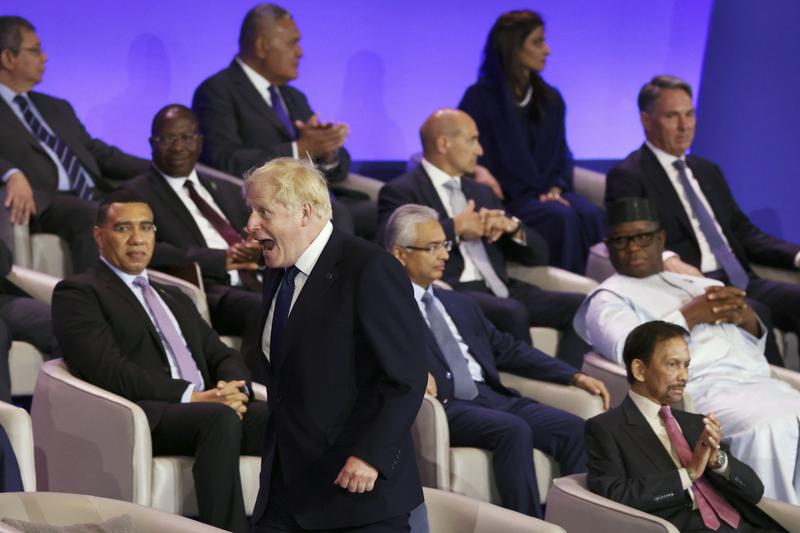 British Prime Minister Boris Johnson reacts as he walks on stage to take his seat during the opening ceremony of the Commonwealth Heads of Government Meeting on June 24, 2022 in Kigali, Rwanda. (DAN KITWOOD / POOL PHOTO VIA AP)

KIGALI – Commonwealth leaders meet in Kigali on Friday to discuss cooperation on topics from trade to health to climate, against a backdrop of criticism of the host Rwanda's human rights record and of a British policy to deport asylum seekers there.

The Commonwealth, a club of 54 countries most of which are former British colonies, encompasses about a third of humanity and presents itself as a network of equal partners with shared goals such as democracy, peace and prosperity.

"The fact of holding this meeting in Rwanda, a new member with no historical connection to the British Empire, expresses our choice to continue reimagining the Commonwealth for a changing world," Rwandan President Paul Kagame said in a speech at the opening ceremony.

One item on the agenda will be applications by former French colonies Togo and Gabon to join the Commonwealth, a sign of disenchantment within France's sphere of influence in Africa and of the attractions of an English-speaking club

The opening ceremony was attended by 29 heads of state and government. The other member states, including South Africa, India, Pakistan, Australia and New Zealand, sent delegations led by ministers or diplomats.

Britain's Prince Charles was there, representing his 96-year-old mother Queen Elizabeth who is the head of the Commonwealth. Charles is due to succeed her, a plan being questioned by some Caribbean members

The leaders will hold two days of talks behind closed doors.

One item on the agenda will be applications by former French colonies Togo and Gabon to join the Commonwealth, a sign of disenchantment within France's sphere of influence in Africa and of the attractions of an English-speaking club.

The theme of the summit, "Delivering a Common Future: Connecting, Innovating, Transforming", offered few clues as to what outcomes were expected.

At previous summits, leaders have agreed on declarations and targets on specific challenges such as malaria, and some of the richer members have pledged funding for specific initiatives.

Earlier this month, 24 civil society groups including Human Rights Watch said the Commonwealth's human rights mandate would be undermined if leaders failed to challenge Rwanda on its record.

They said the Rwandan government was responsible for abusive prosecutions, harassment and torture of dissidents, which Rwanda denies.

The hosting of the summit by Rwanda has also kept the spotlight on Britain's controversial policy to deport asylum seekers to the country.

Prince Charles was reported by British media to have described it as "appalling", an uneasy backdrop to his interactions with Kagame and with British Prime Minister Boris Johnson at the summit.

Johnson, asked by Reuters on Thursday if he would visit detention centers prepared by the Rwandan authorities to receive asylum seekers from Britain, said he was working "flat out" and would not be able to.