BEIJING - On the evening of June 23, Chinese President Xi Jinping hosted the 14th BRICS Summit in Beijing via video link. Following is the full text of the remarks by President Xi at the Summit: 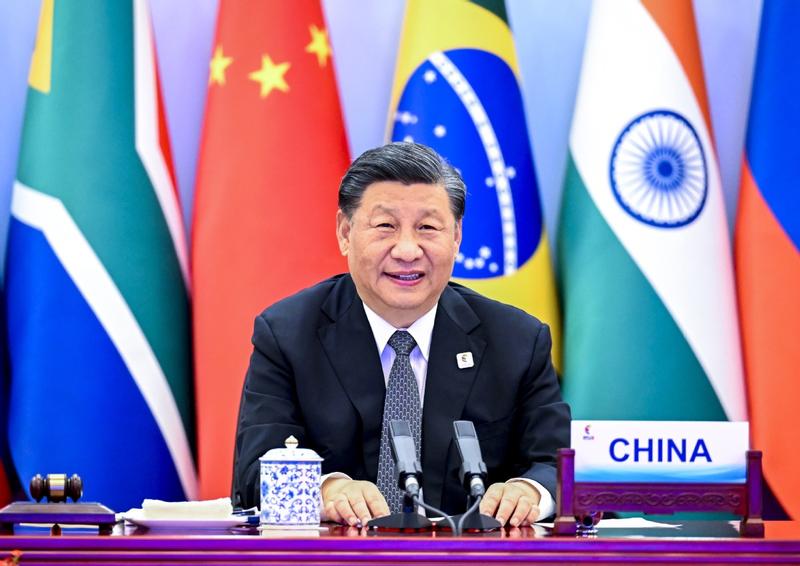 President of the People's Republic of China

At the 14th BRICS Summit

Our world today is living through accelerating changes unseen in a century and continued spread of the COVID-19 pandemic. They confront humanity with unprecedented challenges and usher in a new phase of instability and transformation for global development.

The Chinese people often say, "True gold can stand the test of fire." Over the past 16 years, the giant ship of BRICS has sailed forward tenaciously against raging torrents and storms. Riding the wind and cleaving the waves, it has embarked on a righteous course of mutual support and win-win cooperation. Standing at the crossroads of history, we should both look back at the journey we have traveled and keep in mind why we established BRICS in the first place, and look forward to a shared future of a more comprehensive, close, practical and inclusive high-quality partnership so as to jointly embark on a new journey of BRICS cooperation.

First, we need to uphold solidarity and safeguard world peace and tranquility. Our world today is overshadowed by the dark clouds of Cold War mentality and power politics, and beset by constantly emerging traditional and non-traditional security threats. Some countries attempt to expand military alliances to seek absolute security, stoke bloc-based confrontation by coercing other countries into picking sides, and pursue unilateral dominance at the expense of others' rights and interests. If such dangerous trends are allowed to continue, the world will witness even more turbulence and insecurity.

It is important that BRICS countries support each other on issues concerning core interests, practice true multilateralism, safeguard justice, fairness and solidarity and reject hegemony, bullying and division. This year, we have held the Foreign Ministers' Meeting and the Meeting of High Representatives on National Security, deepened cooperation on counter-terrorism, cybersecurity and other issues, enhanced coordination at the United Nations and other multilateral institutions, and spoke out for justice on the international stage.

Not long ago, I put forward the Global Security Initiative (GSI), which advocates a vision of common, comprehensive, cooperative and sustainable security, follows the philosophy that humanity is an indivisible security community, and aims to create a new path to security that features dialogue over confrontation, partnership over alliance and win-win over zero-sum. China would like to work with BRICS partners to operationalize the GSI and bring more stability and positive energy to the world.

Second, we need to uphold cooperation to boost development and jointly tackle risks and challenges. The combination of the COVID-19 pandemic and the Ukraine crisis has resulted in disruptions to global industrial and supply chains, sustained hikes of commodity prices, and weaker international monetary and financial systems. All these have cast shadows over development worldwide, and emerging markets and developing countries bear the brunt. But just as a crisis may bring chaos, it can also spur change. A lot will ride on how we handle the crisis.

This year, we launched the BRICS Initiative on Enhancing Cooperation on Supply Chains and the Initiative on Trade and Investment for Sustainable Development, adopted the Agreement on Cooperation and Mutual Administrative Assistance in Customs Matters and the Strategy on Food Security Cooperation, and held a High-level Meeting on Climate Change for the first time. We should make good use of these new platforms to boost connectivity of industrial and supply chains and jointly meet challenges in poverty reduction, agriculture, energy, logistics and other fields. We should support greater development of the New Development Bank and a steady process to admit new members, and improve the Contingent Reserve Arrangement to cement the BRICS financial safety net and firewall. We should also expand BRICS cooperation on cross-border payment and credit rating to facilitate trade, investment and financing among our countries.

Last year, I put forward the Global Development Initiative (GDI), which aims to re-energize the implementation of the UN's 2030 Agenda for Sustainable Development and build a global community of development. China stands ready to work with BRICS partners to add more substance to the GDI and contribute to stronger, greener and healthier global development.

Third, we need to uphold the pioneering spirit and innovation and unleash the potential and vitality of cooperation. Those who seize the opportunities of the new economy, such as big data and artificial intelligence, are in sync with the pulse of the times. Those who seek to create monopoly, blockade and barriers in science and technology in order to disrupt other countries' innovation and development and hold on to their dominant position are doomed to fail.

We need to improve global science and technology governance and allow more people to access and benefit from the fruits of scientific and technological advances. This year, we have accelerated the building of the BRICS Partnership on New Industrial Revolution Innovation Center in Xiamen, hosted the Forum on the Development of Industrial Internet and Digital Manufacturing and the Forum on Big Data for Sustainable Development, reached the Digital Economy Partnership Framework, issued the Initiative for Cooperation on Digitalization of Manufacturing, and established a network of technology transfer centers and an aerospace cooperation mechanism. All these have opened new channels for closer industrial policy coordination between BRICS countries. Recognizing the importance of talents in the digital age, we have set up the Alliance for Vocational Education, and organized the Skills Competition and the Women Innovation Contest to build a talent pool for stronger BRICS cooperation on innovation and entrepreneurship.

Fourth, we need to uphold openness and inclusiveness and pool collective wisdom and strength. BRICS countries gather not in a closed club or an exclusive circle, but a big family of mutual support and a partnership for win-win cooperation. At the Xiamen Summit in 2017, I proposed the "BRICS Plus" cooperation approach. Over the past five years, "BRICS Plus" cooperation has deepened and expanded, setting a prime example of South-South cooperation and seeking strength through unity among emerging markets and developing countries.

Under the new circumstances, it is all the more important for BRICS countries to pursue development with open doors and boost cooperation with open arms. This year we, for the first time, invited guest countries to attend the BRICS Foreign Ministers' Meeting. The newly established BRICS Vaccine R&D Center has an unequivocal commitment to openness. Step by step, we have organized a variety of "BRICS Plus" events in such areas as scientific and technological innovation, people-to-people exchanges and sustainable development. All these provide new platforms for cooperation among emerging markets and developing countries.

In recent years, many countries have asked to join the BRICS cooperation mechanism. Bringing in fresh blood will inject new vitality into BRICS cooperation and increase the representativeness and influence of BRICS. This year we have, on separate occasions, had in-depth discussions on the question of membership expansion. It is important to advance this process to allow like-minded partners to become part of the BRICS family at an early date.

As representatives of emerging markets and developing countries, we must make the right decision and take responsible actions at this critical juncture of history. What we do will have a significant impact on the world. Let us stay united, pool strength and forge ahead to build a community with a shared future for mankind and jointly create a bright future for humanity.