By Liu Zhihua and Zhong Nan 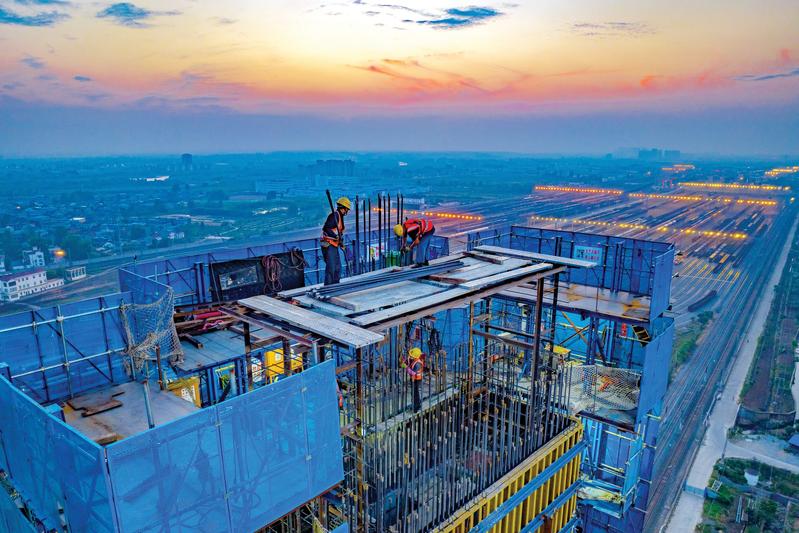 After working from home for a month due to a resurgence of COVID-19 cases, Beijing resident Qi Xinxin has had some good news — his new car will arrive soon, with the manufacturing plant accelerating production in Shanghai.

Qi is just one of the countless city residents whose lives have been impacted by the resurgence of the disease, which has also disrupted the economy.

However, despite the hardships experienced, experts said the dynamic zero-COVID policy will place China’s foreign trade growth on a firmer footing and help mitigate pressures on the nation’s overall economic growth.

Lan Qingxin, a professor at the University of International Business and Economics’ Academy of China Open Economy Studies in Beijing, said: “China’s successful epidemic control is based on a socialist market economy. When adopting the dynamic zero-COVID approach to protect people against the disease, some temporary suspensions and restrictions have been required, and they will have an impact on social and economic activities to a certain extent.

“But such an impact is short-term and the approach is necessary to ensure stable medium- and long-term growth of the Chinese economy, which is also important for economic recovery worldwide.”

From March onward, China has faced and withstood the severest challenge to its defenses against COVID-19 since the disease emerged in Wuhan, capital of Hubei province, in early 2020. It has resurfaced in many places, including major economic hubs such as Beijing, Shanghai and Shenzhen, Guangdong province.

According to the National Bureau of Statistics, or NBS, China’s GDP grew by 4.8 percent year-on-year in the first quarter, marking a steady start to this year in the face of domestic challenges and global uncertainties.

China is maintaining the dynamic zero-COVID policy at a time when many economies have relaxed social distancing and other restrictions, resulting in the sustainability of the policy being questioned by some observers.

The policy is not designed to realize zero COVID-19 infections, but to achieve maximum prevention and control at minimum social and economic cost, and in the shortest possible time.

Fu Linghui, a spokesman for the NBS, said at a recent news conference in Beijing that although some indicators contracted in April, the impact of COVID-19 would be temporary, and the nation’s economy is on track to recovery.

According to the NBS, the nation’s average annual GDP growth at times in 2020 and last year was as high as 5.1 percent.

The capacity of Maersk trucking services to and from Shanghai has gradually improved to 70 percent.

Wu said, “We will work closely with our customers and partners to seek alternative solutions, including multimodal services between Shanghai and nearby cities.”

Zhou Mi, a senior researcher at the Chinese Academy of International Trade and Economic Cooperation in Beijing, said the dynamic zero-COVID strategy offers enterprises clear paths to abide by related policy measures, and such policy transparency and predictability are extremely important for businesses to continue growth.

A surge in orders at Yangzijiang Shipbuilding Group, which is based in Jingjiang, Jiangsu province, is testimony to such growth.

Orders received by the company recently reached the highest level for nearly two decades, with about 90 percent of them placed by foreign clients, mainly from Japan, Singapore and a number of European countries.

He Minghui, the group’s assistant president, attributes the rise in overseas orders mainly to surging demand at foreign shipping and energy companies, as well as his company’s ability to meet such demand, which is guaranteed by China effectively controlling the epidemic.

“If China abandons the dynamic zero-COVID policy, the predictable high number of infections in the nation’s manufacturing sector will disrupt global trade and supply chains, not only affecting economic recovery in many countries but also resulting in businesses and customers facing shortages of industrial and consumer goods,” he said.

Optima Integration Group, or OIG, a leading frozen products import service platform in China, has seen steady growth in the first four months of this year despite recent disruptions to cold-chain logistics.

“China needs to adhere to the dynamic zero-COVID policy, despite the epidemic-related shutdowns of factories and disruptions to logistics creating obstacles for many businesses to maintain highly efficient operations temporarily,” Gao said.

According to a study by the OIG Institute, the company’s research facility, if the epidemic spreads nationwide, the food supply industry and many others will be badly affected, Gao said.

Zhang Jianping, head of the Center for Regional Economic Cooperation at the Chinese Academy of International Trade and Economic Cooperation, said the nation’s effective control of the epidemic to restore normal economic operations is invaluable in stabilizing global industrial and supply chains and shoring up economic recovery worldwide.

Chen Bin, executive vice-president of the China Machinery Industry Federation, which is based in Beijing, said, “Faced with various challenges, such as rising commodity prices and fierce competition in low-end manufacturing from Southeast Asian economies, it is equally important for China to adopt new solutions to ensure the stability of its industrial chains while implementing the dynamic zero-COVID policy.”

Adhering to the policy is evidence of China’s wisdom in sustaining long-term growth, Chen said.

Speaking at a Tsinghua University economists’ forum in Beijing in late May, he said latecomer advantage, a huge domestic market, considerable economic output, and a good policy environment are among China’s key advantages in pursuing stable economic growth.

Nicolas Poirot, president and CEO of the China unit of Air Liquide Group, a French industrial and medical gas supplier with 120 plants in China, said the company’s amount of work and logistics situation have improved in and around Shanghai with the issuance of special permits from the authorities.

These improvements have been witnessed since the first batch of companies in strategically important sectors were given approval to resume work, Poirot said.

The dynamic zero-COVID approach and united efforts from various levels of government and industries in China have kept the group’s employees safe from the epidemic, and also improved its access to supplies, he said.

Shu Jueting, a spokeswoman for the Ministry of Commerce, said at a recent regular news conference that China will continue to stabilize foreign investment and provide a better business environment and services for foreign companies.

In the first four months of this year, foreign direct investment in use on the Chinese mainland rose by 20.5 percent year-on-year to 478.61 billion yuan ($71.6 billion), data from the ministry show.

As long as the nation maintains dynamic economic expansion and adheres to opening-up, its growth promises opportunities for other economies, he said.

Danfoss Group, one of Denmark’s largest industrial enterprises, recently launched new products such as scroll compressors and converters especially designed and optimized to meet the specific needs of Chinese customers. Earlier this year, the company opened a new application development center in Haiyan, Zhejiang province, to support its climate solution businesses in the Chinese market.

Xu Yang, president of Danfoss China, said that despite disruptions to the company’s operations and production caused by the COVID-19

outbreak in Shanghai, it remains confident in the long-term prospects for the Chinese market and is determined to increase investment in the country.

“As the epidemic is being brought under control, and the nation’s measures to shore up economic growth take more effect, the Chinese economy is certain to resume its normal growth momentum,” Xu said.

Li Fusheng contributed to this story.