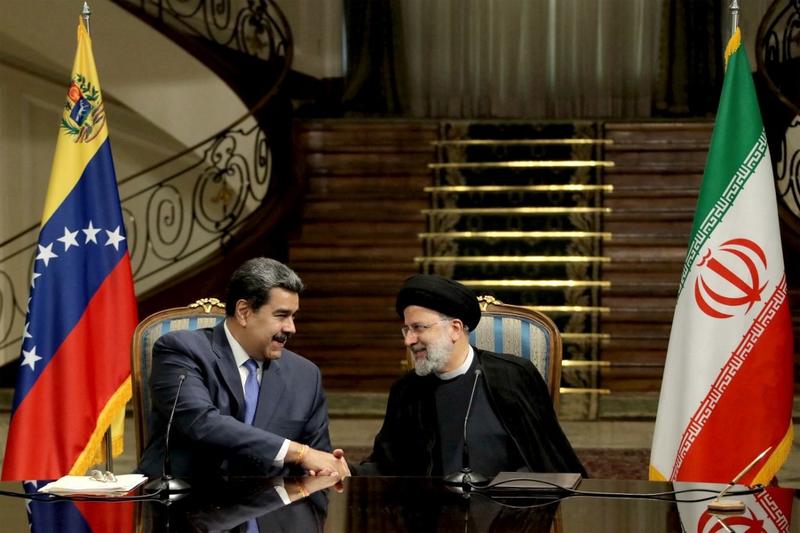 Speaking at a press conference after the signing of the agreement, Raisi said that Iran has always sought to have ties with "independent countries" and that "Venezuela's resistance against imperialism and enemies was exemplary."

Raisi added that Iran "has decided to leverage" sanctions imposed against it and make them "improvement opportunities for the country."

Maduro, who arrived in Tehran on Friday with a high-ranking politico-economic delegation, said at the press conference that a weekly flight from Caracas, Venezuela's capital, to Tehran would begin on July 18.

Maduro's first visit to Iran comes amid the impasse of Iran's nuclear talks with world powers. Sanctions imposed by the United States and rising global food prices are putting additional strain on Iran's government and people.

Also on Saturday, the Venezuelan leader met with Iranian Supreme Leader Ayatollah Ali Khamenei, during which Maduro said his country is drawing up a "precise roadmap for improving cooperation with Iran in various fields, particularly science and technology."

"Venezuela has succeeded in fully confronting the US aggression through resistance," said Maduro, adding that the economic situation in the South American country has improved greatly over the past few years.

Lauding the relationship between the two sides, Khamenei said that by strengthening ties with Venezuela, Iran has shown that "it takes risks in times of danger and offers a helping hand to its friends."

Iran is the third country Maduro visited this week after trips to Turkey and Algeria.

READ MORE: Iran says it is ready to continue fuel shipments to Venezuela