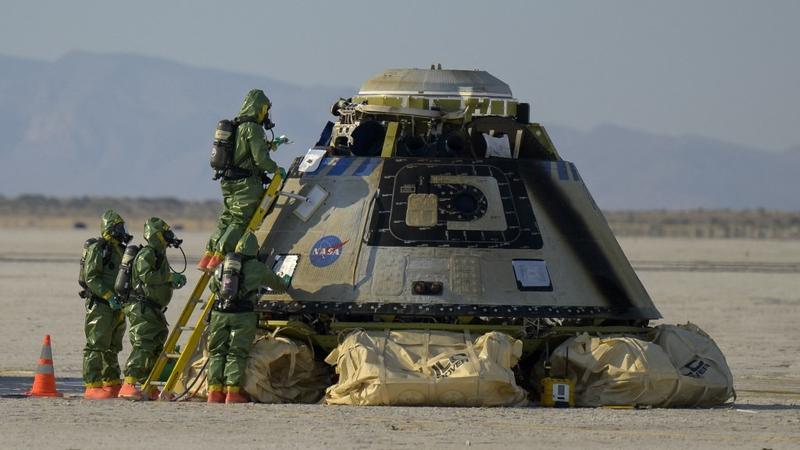 The CST-100 Starliner spacecraft undocked from the ISS at 2:36 pm Eastern Time Wednesday, about five days after being attached to the microgravity laboratory as part of its uncrewed mission, dubbed as Orbital Flight Test-2.

About four hours after departing the space station, Starliner touched down onto its airbags at 6:49 pm Eastern Time, and landed in the desert of the western United States.

About four hours after departing the space station, Starliner touched down onto its airbags at 6:49 pm

The landing followed a deorbit burn, separation of the spacecraft's service module, and successful deployment of its three main parachutes and six airbags, according to NASA.

As part of the flight test for NASA's Commercial Crew Program, Boeing accomplished planned test objectives, including Starliner launch and normal trajectory to orbital insertion, ascent abort emergency detection system validation, approach, rendezvous, and docking with the ISS, crew habitability and internal interface evaluation, undocking and departure from the ISS, and precision targeted landing and recovery, according to NASA.

"Throughout this process, Starliner has provided a tremendous amount of valuable data, which we're continuing to assess in our effort to bring the spacecraft online and fully operational for crew flights to the space station as soon as it is safe to do so," said Steve Stich, manager of NASA's Commercial Crew Program.

The spacecraft was launched on the ULA Atlas V rocket to the ISS from Cape Canaveral Space Force Station in Florida last Thursday.

Following liftoff, Starliner successfully entered Earth's orbit, performed a series of demonstrations of its capabilities, and docked with the orbital outpost 26 hours after launch.

ALSO READ: NASA plans to retire ISS by end of 2030

Starliner delivered 227 kg of cargo to the space station and brought 272 kg of cargo back to Earth.

With the completion of OFT-2, Boeing will incorporate lessons learned and continue working to prepare for the crewed flight test and NASA certification, said Mark Nappi, vice president and program manager of the Boeing Commercial Crew Program.

After NASA and Boeing review processes data from this test flight, teams will continue plans for Starliner and its next mission -- the crewed flight test to the space station.