Nadal on back foot as injury clouds Roland Garros prospects

Spain's Rafael Nadal talks to journalists during a press conference at the Italian Open tennis tournament, in Rome, May 9, 2022. (GREGORIO BORGIA / AP)

A chronic foot issue may be the biggest threat to Rafa Nadal's bid for a record-extending 14th French Open trophy this month, with the injury preventing the Spaniard from rediscovering the kind of form he will need to see off a host of challengers.

Nadal, who is also looking for a 22nd major title that would give him a little more breathing space ahead of Novak Djokovic and Roger Federer, had said he considered retirement after missing the bulk of 2021 due to the problem.

The 35-year-old did not look to have lost a step at the Australian Open earlier this year, however, his triumph on Melbourne's hardcourts giving him a record 21st Grand Slam title to break a three-way tie with Federer and Djokovic.

I had my foot again with a lot of pain. I am a player living with an injury - it is nothing new. Unfortunately, my day-by-day is difficult, honestly. Even like this, I am trying hard ... it can be frustrating that a lot of days I can't practice the proper way.

Injury issues struck again in March when he suffered a stress fracture in his rib during his run to the Indian Wells final and the left-hander only returned to competition in Madrid this month.

In a further jolt to his French Open hopes, Nadal was beaten by 19-year-old Carlos Alcaraz in the Madrid quarter-finals before losing to Canadian Denis Shapovalov in the third round of the Rome Masters.

"I had my foot again with a lot of pain," a frustrated Nadal told reporters after his loss to Shapovalov. "I am a player living with an injury - it is nothing new.

"Unfortunately, my day-by-day is difficult, honestly. Even like this, I am trying hard ... it can be frustrating that a lot of days I can't practice the proper way."

Any doubts about his participation in the French Open, which starts on Sunday and ends with the men's final on June 5, were laid to rest when he appeared on Court Philippe Chatrier on Wednesday for a practice session and showed no signs of discomfort.

ALSO READ: Nadal breezes through on his return from injury in Madrid Open 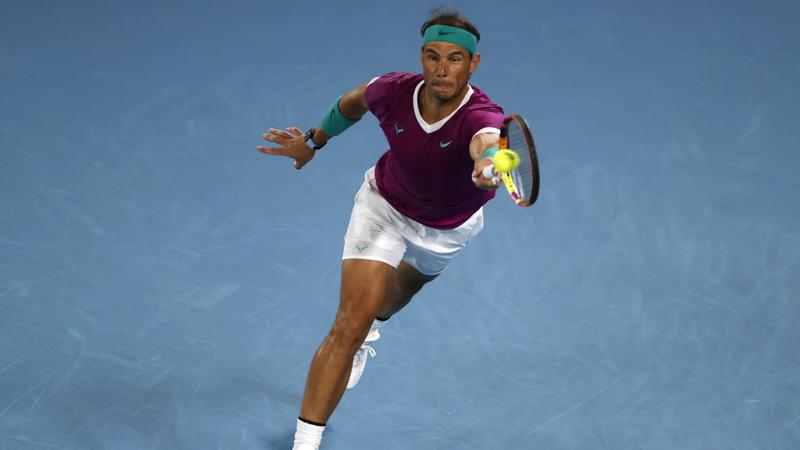 Rafael Nadal of Spain plays a forehand return to Matteo Berrettini of Italy during their semifinal match at the Australian Open tennis championships in Melbourne, Australia, Jan 28, 2022. (TERTIUS PICKARD / AP)

Nadal had won the French Open four years in a row before losing to eventual champion Djokovic in the semi-finals last year - just the third time he was beaten at the claycourt major since his debut in 2005.

The Spaniard will have to regain his aura of invincibility quickly at Roland Garros - Djokovic looked in peak form during his Rome Masters title run and Alcaraz signaled his Paris potential with claycourt triumphs in Barcelona and Madrid.

But the world number five, whose achievements earned him a statue of steel at Roland Garros, should be considered the favorite if he is fit, said 2004 French Open semi-finalist Tim Henman.

"I think everyone hopes that he's going to be fit and healthy while Djokovic won last week in Rome and played very, very well ... If Nadal is fit, given his record, I think you have to give him the edge."