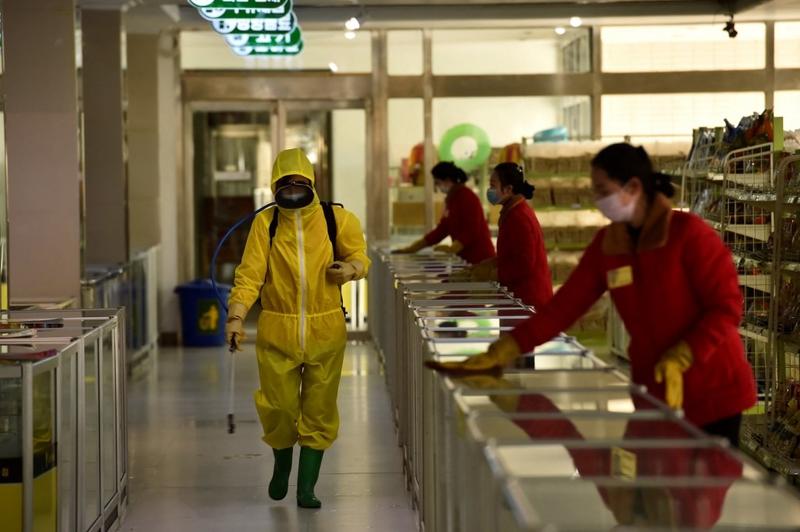 In this file photo taken on March 18, 2022, employees spray disinfectant and wipe surfaces as part of preventative measures against the COVID-19 pandemic at the Pyongyang Children's Department Store in Pyongyan. (KIM WON JIN / AFP)

SEOUL / TOKYO / CANBERRA – The Democratic People’s Republic of Korea said on Sunday a total of 42 people had died as the country began its fourth day under a nationwide lockdown aimed at stopping the country's first confirmed COVID-19 outbreak.

All provinces, cities and counties of the country have been totally locked down and working units, production units and residential units closed from each other since the morning of May 12 and strict and intensive examination of all the people is being conducted.

The DPRK’s admission on Thursday that it is battling an "explosive" COVID-19 outbreak has raised concerns that the virus could devastate a country with an under-resourced health system, limited testing capabilities and no vaccine program.

"All provinces, cities and counties of the country have been totally locked down and working units, production units and residential units closed from each other since the morning of May 12 and strict and intensive examination of all the people is being conducted," KCNA reported on Sunday.

A day earlier DPRK leader Kim Jong-un said the spread of COVID-19 had thrust his country into "great turmoil" and called for an all-out battle to overcome the outbreak.

A "large proportion" of the deaths have been due to people "careless in taking drugs due to the lack of knowledge and understanding of stealth Omicron variant virus infection disease and its correct treatment method," the report said.

Korean Central Television on Saturday night broadcast treatments for the fever. A doctor at Kimmanyu Hospital suggested "gargling with salt water" and taking different medications in case of high temperature, headache and muscle and joint pains.

At least 296,180 more people came down with fever symptoms, and 15 more had died as of Sunday, the outlet said.

The country had previously claimed no confirmed cases of the virus, and is one of only two countries in the world that have yet to begin a COVID vaccination campaign, according to the World Health Organization.

Australia's health body has warned that coronavirus cases will continue to rise due to community complacency.

Australia's per capita infection rate is now among the highest in the world, with an expected spike in cases during the looming winter

Australia reported more than 50,000 new COVID-19 infections for three consecutive days between Wednesday and Friday, and as of Friday, the death toll has reached 7,721, more than 800 up from three weeks ago.

Australia's per capita infection rate is now among the highest in the world, with an expected spike in cases during the looming winter.

Chris Moy, vice-president of the Australian Medical Association, said that freedoms across Australia after almost two years of strict restrictions have "a price."

"Across Australia we are getting about 40,000 cases a day, and there are 350,000 people with COVID at any moment ... and 3,000 people in hospital," he told Australian Broadcasting Corporation radio.

"We are up there with the very largest case numbers in the world, partly because we didn't have so many cases earlier but the complacency, the freedom has a price."

Moy said that with new Omicron variants continuing to emerge Australians could not rely on previous infection for immunity.

"We really need people vaccinated and not just relying on the fact that they may have had COVID previously, because obviously if you look at that logically the concern is there could be a surge from BA4 and BA5 at some stage," he said.

Japan plans to extend up to $100 million in aid to developing countries in the Indo-Pacific region to help them better battle the COVID-19 pandemic, Foreign Minister Yoshimasa Hayashi said on Friday.

Hayashi made the comment to reporters on the sidelines of a Group of Seven foreign ministers meeting in Germany, where discussion focused mostly on the Russia-Ukraine conflict.

"We will also discuss COVID-19 response at working dinner tonight. I will unveil a plan to offer up to $100 million in aid mainly to the Indo-Pacific, with focus on vaccination data management, border control and disposal of infectious waste," he said.