US smearing of China over Ukraine slammed

By Zhang Yunbi in Beijing, Chen Weihua in Brussels and Ren Qi in Moscow 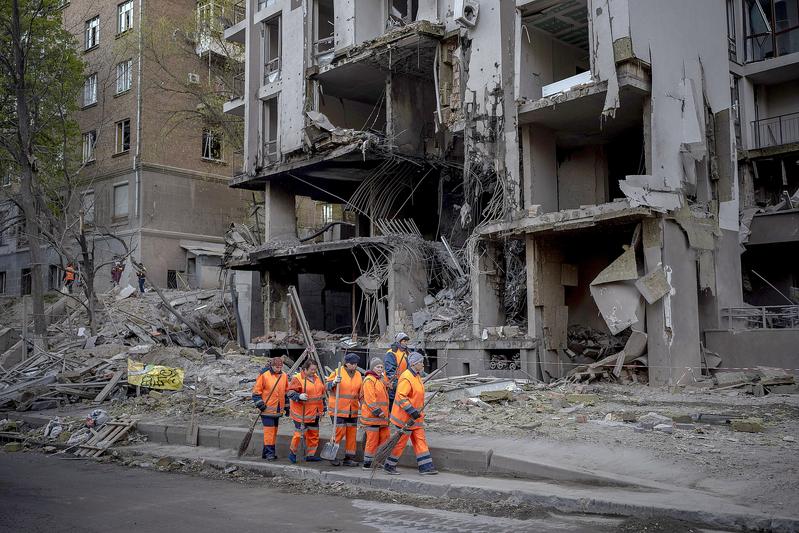 A cleanup crew prepares to work at the site of an explosion in Kyiv, Ukraine, on April 29. (EMILIO MORENATTI / AP)

The Chinese embassy in the United States has rebuked and debunked a recent statement issued by US State Department attacking Beijing’s position on the Ukraine situation, saying that “blaming and smearing just won’t solve the problem”.

“China’s position on the Ukraine issue is impartial, objective and beyond reproach,” an embassy spokesperson said in remarks published on the embassy’s website on May 4.

The US State Department issued a website statement on May 2 claiming that Chinese officials and media show China’s support for Russia as they “routinely amplify Kremlin propaganda, conspiracy theories, and disinformation” on the Ukraine issue.

In response, the Chinese embassy spokesperson said that “the US side should seriously reflect on itself” when it comes to spreading disinformation.

“It is the US officials and media who have spread such rumors that China knew in advance and tacitly supported Russia’s military action, and that China helped Russia evade sanctions and provided military support to Russia. These are disinformation in every sense of the word,” the spokesperson said.

Challenging Washington’s claims, the Chinese embassy spokesperson noted that the US admitted, in a work document it submitted last year to the meeting of the State Parties to the Biological Weapons Convention, that it has 26 biolabs in Ukraine.

“According to the fact sheet released by the US Department of Defense in March, the US is supporting 46 facilities in Ukraine. This is not disinformation,” the spokesperson said.

The US should welcome joint verification by the international community under the United Nations and the Biological Weapons Convention, the spokesperson added.

Noting that both countries are permanent members of the UN Security Council, the spokesperson said Beijing and Washington “should work together with the rest of the international community for an early political settlement of the Ukraine crisis”.

Meanwhile, people in Europe bear the risk of higher inflation as the European Union is moving toward phasing out Russian oil imports by the end of this year after Germany changed its mind but warned of major blowback on EU economies.

German Vice-Chancellor and Economic Affairs Minister Robert Habeck said on May 2 that Germany would be able to cope if Russian oil supplies were cut off by an embargo or a decision by Moscow to switch off the tap.

Habeck’s comment, ahead of an EU energy ministers meeting on May 2 in Brussels, marked a major shift in the German government’s stance. Previously, German leaders had opposed the idea and said a ban on Russian oil and gas would cause an economic recession, massive unemployment and poverty at home.

The European Commission is expected to publish later this month plans to end the EU’s dependence on Russian fossil fuels by 2027, including expanding the renewable energy sector.

While expressing Germany’s willingness to move toward cutting off Russian oil, Habeck warned of higher energy prices for EU consumers and a blow to EU economies.

Referring to the ban, he said, “We will be harming ourselves — that much is clear.”

Reuters quoted two EU officials as saying that the EU may spare Hungary and Slovakia from an embargo on Russian oil. Both rely heavily on Russian fossil fuels. Hungary has repeatedly voiced opposition to sanctions on Russian energy, emphasizing its concerns were economic, not political.

In other news related to the Ukraine conflict, Russian forces reportedly launched major assaults since May 3 on the Azovstal steel plant in the southern port city of Mariupol, as 101 civilians who had been trapped at the site for weeks were finally brought to safety. The United Nations and Red Cross said the 101 people were moved out as part of a five-day operation.

French President Emmanuel Macron, in a phone talk with Russian President Vladimir Putin, pushed for evacuations at the besieged Azovstal plant, the last holdout of Ukrainian forces in Mariupol, in coordination with humanitarian units. He also said that the evacuees must be allowed to choose their destinations, as provided for under international law.

In a video address, Ukrainian President Volodymyr Zelensky said, “Without a doubt, we will continue doing everything we can to get all our people out of Mariupol, out of Azovstal.”

Later on May 4, he said: “We will not settle for a frozen conflict... I am against it. We will definitely not have such a document.”

Zelensky said that his country may put the issue of neutral status on a nationwide referendum, the Ukrinform news agency reported.

However, the referendum would be possible only after Ukraine receives security guarantees from “specific countries”, he added.

Putin said that despite Kyiv’s “unpreparedness for serious work”, Russia remains open to dialogue. And he stressed that the West must stop supplying weapons to Ukraine, and accused Kyiv of not taking seriously the talks to end the conflict.