By Cao Yin and Zhu Xingxin in Shanghai 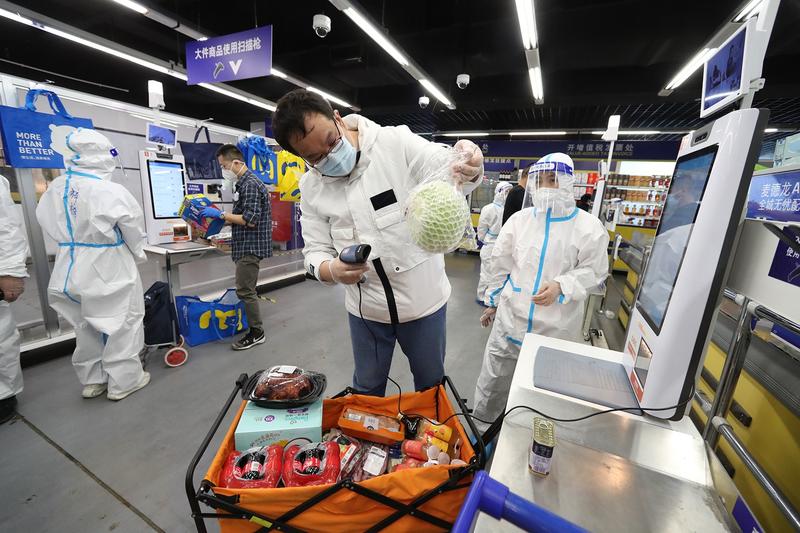 A customer scans products at a supermarket's self-service checkout in Shanghai on Thursday, after the supermarket in a designated precautionary zone for COVID-19 reopened for residents living nearby. (ZHU XINGXIN / CHINA DAILY)

For several years, Nie Shuyin shared a restroom with about 10 tenants at a house in Lianqin village, Beicai town in the Pudong New Area of Shanghai.

Now, the migrant worker from Zaozhuang, Shandong province, has just been provided with a portable toilet at home, and has been told that someone in the village will come to disinfect and clean it every day.

This change, which was made to help prevent cross-infection of COVID-19 arising from shared facilities, was introduced after about 2,300 villagers, including Nie, returned home around April 25, some 10 days after being relocated to centralized quarantine sites due to rising numbers of COVID-19 cases in the area.

The rapid growth of infections in the middle of last month saw Beicai become the "eye of the storm" in the latest outbreak in Shanghai, and also led to local authorities taking more targeted measures to prevent and control the outbreak. 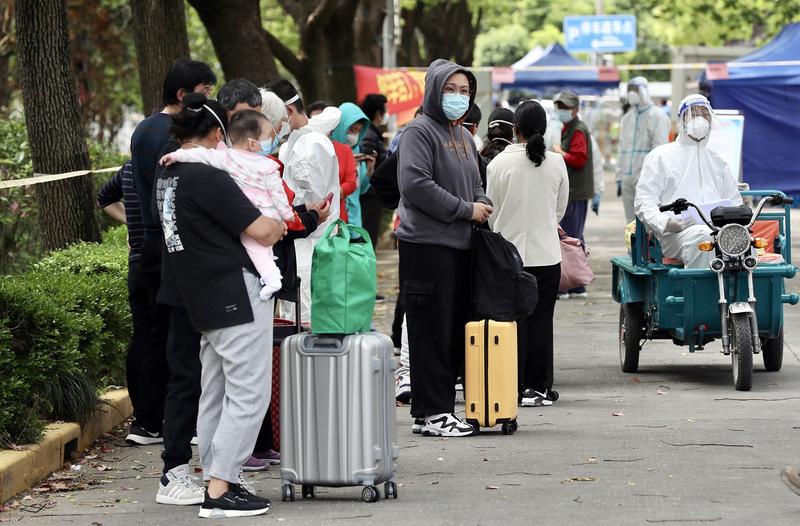 For example, an anti-epidemic team in Beicai conducted thorough disinfection procedures after taking residents into quarantine sites and providing portable toilets to curb the spread of the virus.

Beicai has optimized its work flow and improved the way in which nucleic acid test samples are collected. Village committees have also been told to offer better medical services and pay more attention to ensuring that supplies reach residents during the operation of a closed-loop management system. 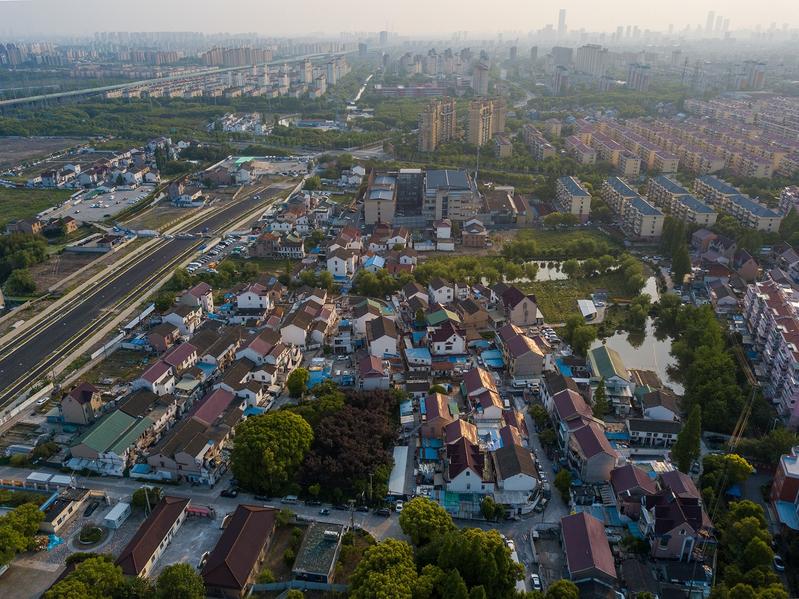 According to China's sixth population census in 2010, a total of 277,490 people were living in Beicai－more than 155,000 of them migrant workers.

Shen Zaiyuan, head of the Lianqin village committee, said about 80 percent of his villagers are tenants, adding that they mainly work in the farming and logistics industries in Shanghai.

He said he was surprised by the speed at which the Omicron variant of COVID-19 spread, adding that an inferior living environment and complicated population structure initially posed difficulties in fighting the outbreak.

"Some villagers may have been infected before Pudong－the area east of the Huangpu River that was locked down at the end of March," Shen added.

Data from the town's anti-epidemic team show that more than 2,600 people in Beicai were infected on April 12－more than 400 of them living in Lianqin. 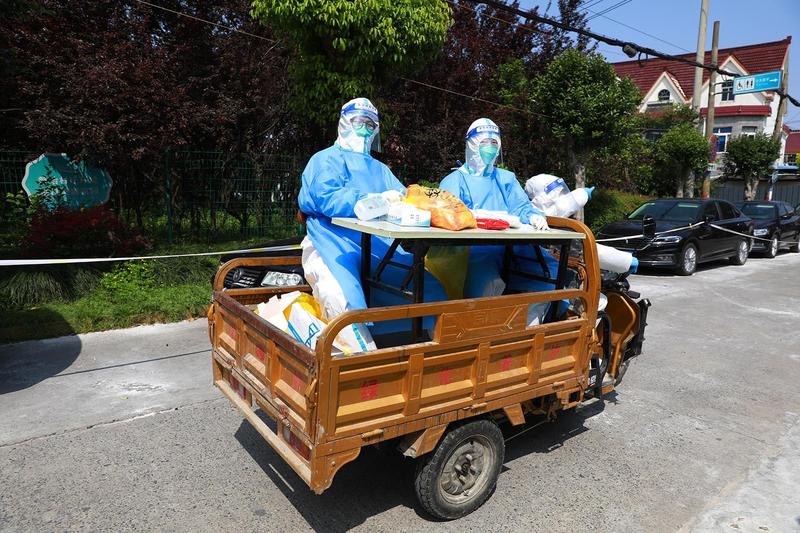 After seeing the soaring number of infections, governments from central to grassroots level, along with medical experts, gave priority to epidemic control work in Beicai. They drew up plans to stabilize the situation with more-targeted measures, paying extra attention to urban villages.

As the infection rate in Lianqin remained high in the middle of last month, the anti-epidemic team took villagers to centralized quarantine sites on the evening of April 16, enabling the entire village to be thoroughly disinfected.

Nie, who comes from Shandong province, has worked in Shanghai for eight years. He said his landlord told him that villagers with negative nucleic acid test results would be sent to quarantine sites, while positive cases and their close contacts in Lianqin would be transferred to designated hospitals, makeshift facilities, or would receive medical treatment in a cordoned-off area of the village.

"I decided to take necessities and valuables to the quarantine hotel with my wife, mother and 9-month-old child that evening, because half my neighbors were found to be infected at that time," he said, adding that he had worries about his family becoming infected.

"The disinfection work was a great relief, and I now feel safer," Nie said. 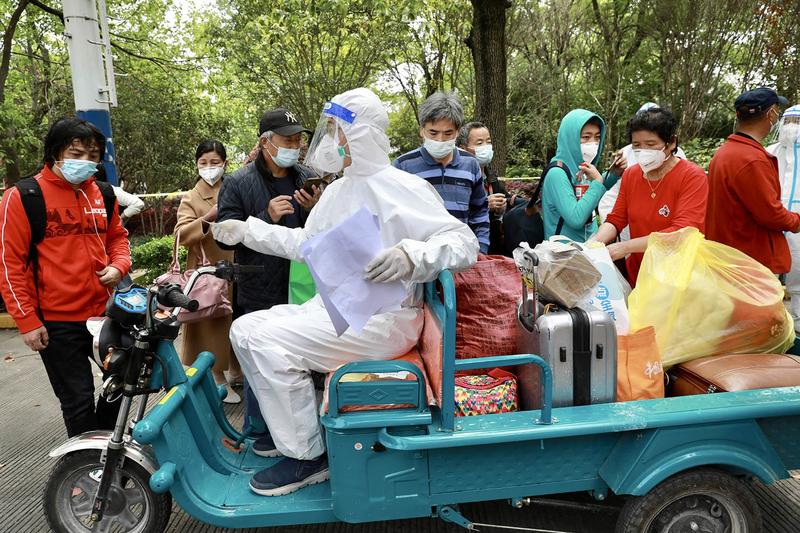 While relocating residents, the town's anti-epidemic team also began optimizing the way in which nucleic acid test samples were transported through urban villages.

On Sunday, volunteers used motorized tricycles in Lianqin to collect the samples, with medical workers driving to each household to take them.

Mai Lizhen, a Shanghai native who lives in Lianqin, welcomed the change. She said that previously when residents returned home from quarantine sites, they were asked to line up in a playground in the village to wait for nucleic acid tests, which made it easier for large numbers of people to gather.

"But since we've returned, we've been told to stay home and provide the samples one by one," she said. "In other words, the samples are collected at our doorsteps. This is safer and more orderly."

Motorized tricycles have also been used to collect samples in Yangqiao village, which is about a 10-minute drive from Lianqin.

Ji Ling, Party chief of Yangqiao, said: "We used to have one site for our residents to provide samples together, but we no longer set up a mass sampling site, as it doesn't suit the current situation. Instead, we conduct nucleic acid testing at each resident's door." 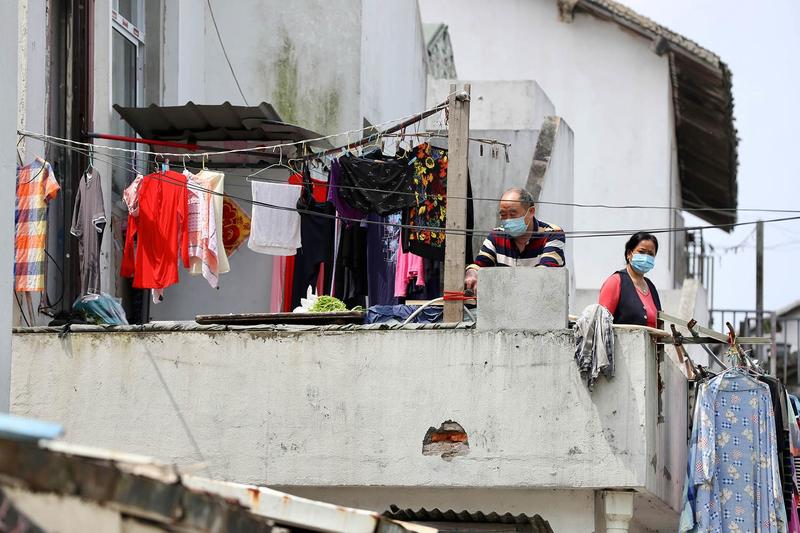 While asking residents in the town to strictly abide by epidemic control measures when they are tested, and also to monitor their health at home, village committees have been told to strengthen efforts to ensure people have sufficient supplies of daily necessities and to provide them with better medical care, according to the official from the Beicai anti-epidemic team.

Shen, the Lianqin village head, said packages of vegetables were provided for residents when they returned home, adding that supplies of such groceries would be continued for the villagers during lockdown.

After 3,000 portable toilets were provided for Beicai residents, Wu Zhongchun, secretary-general of Zhejiang Chamber of Commerce in Shanghai, said the organization would continue to support the town with more supplies, such as vegetables and meat, to help residents get through this difficult time.

He added that 68 enterprises that are members of the chamber contacted the town, pledging to guarantee the supply of goods for those who need to stay home for health monitoring during the outbreak.

Nie, the Lianqin villager, said he used Chinese chives and flour provided by the village committee to make dumplings for dinner on April 28, ahead of the May Day holiday. The dish, which is traditionally served on festive occasions in China, represents people's best wishes and hopes for life. 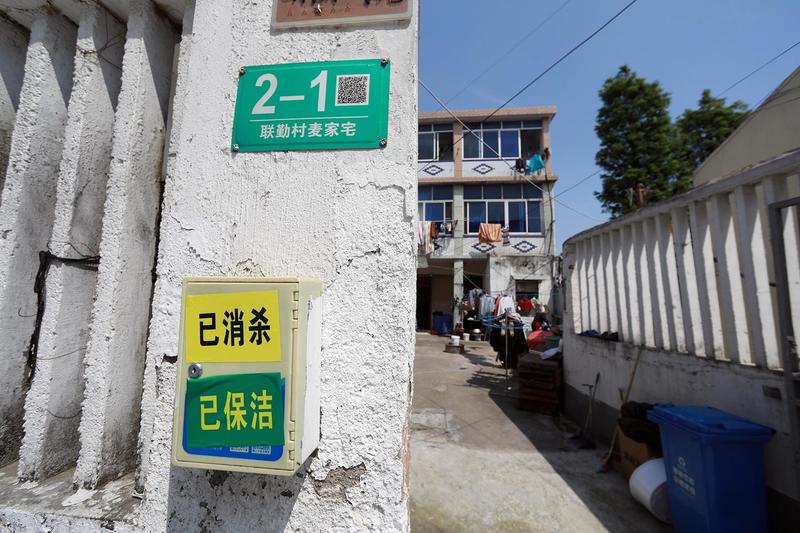 Feng Jiaqian, who works for the Yangqiao village committee, said she would continue to voluntarily help villagers in lockdown, especially the elderly with chronic diseases, by buying and delivering medicines for them.

"Residents can call to tell us what drugs they want, and then I'll try my best to meet their demands according to the list of medicines provided by health officials," she said.

Feng said that when the latest COVID-19 cases emerged in Shanghai in March, "it took me much more time to get medication, as insufficient supplies at hospitals couldn't match the sudden rise in demand. Sometimes it took me a whole day to help villagers locate medicines.

"It's the first time I have done such work, so I could accept complaints from some residents when I bought the wrong dosage of medicines for them, even though I initially felt a little aggrieved and upset," she said.

"The job has also helped me understand more about our villagers and their health conditions," she added. "I'm exhausted after locating and buying drugs every day, but when someone thanks me, I immediately cheer up." 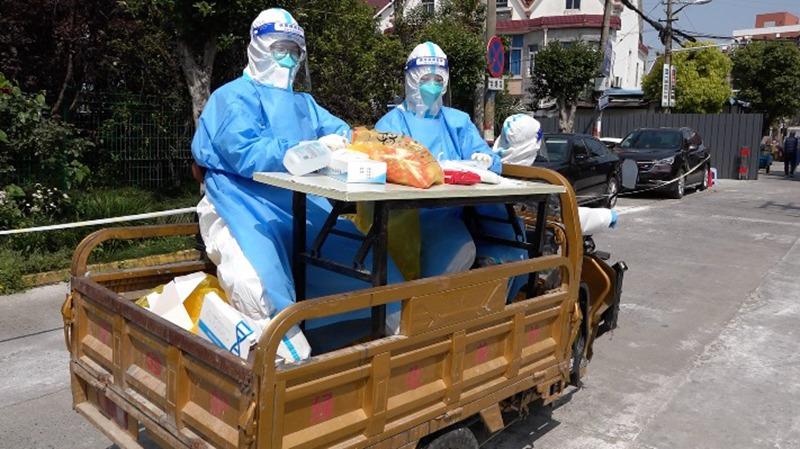 Beicai Community Health Service Center, the only public hospital in the densely populated town, has also made great efforts to provide nucleic acid sampling and medical services in recent weeks.

To offer more convenience for residents and improve work efficiency, Song Huijiang, dean of the center, said a plan is being considered to set up some 70 sites across the town for the provision of nucleic acid test samples.

He said that this month the center started to vaccinate people age 60 and older in Beicai to ensure their health safety. More medical services are also being provided for women and children.

"We will reopen outpatient departments step by step," Song said, adding that services at ophthalmology, stomatology and dermatology divisions, where doctors and patients need to be in close contact, would resume later.

Although the soaring numbers of positive cases in Beicai have been controlled under the series of measures taken, the official from the anti-epidemic team said, "More efforts should be made to consolidate this achievement, as the battle against the latest wave of COVID-19 in the town is ongoing."