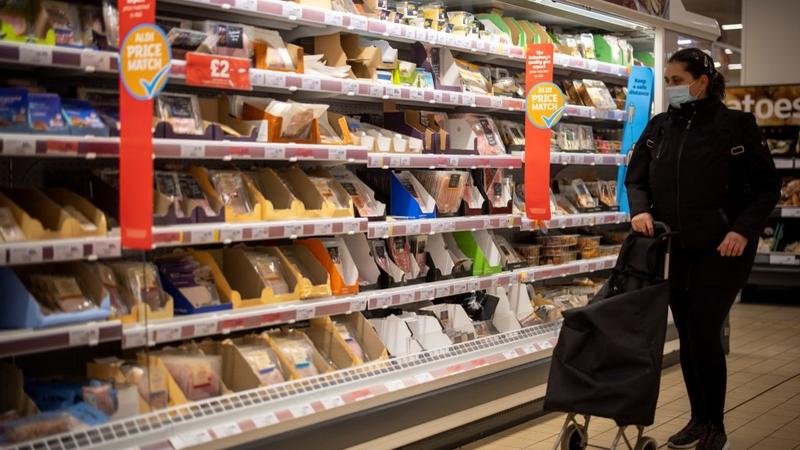 A customer shops for cheese and dairy products at a Sainsbury's supermarket in Walthamstow, east London on Feb 13, 2022. (TOLGA AKMEN / AFP)

LONDON - Britons are buying less meat, fish and poultry as they look to save cash, amid a worsening cost of living crisis.

NielsenIQ said total sales at UK supermarkets fell 1.8 percent on a value basis over the four weeks year-on-year, with a slight decline in the average number of items in the basket - 11.2 versus 11.5

Market researcher NielsenIQ said on Wednesday, volume sales of meat, fish and poultry fell 13 percent in the four weeks to April 23 year-on-year, a period that included the Easter holiday, and fell 7.8 percent year-on-year on a value basis, indicating that UK shoppers are moderating their purchasing in this category.

Surging prices are causing the biggest squeeze on UK household incomes since at least the 1950s and consumer confidence is at near record lows.

Last week official data found almost a quarter of Britons were struggling to pay their household bills, while the boss of the country's second largest supermarket group Sainsbury's said shoppers were now "watching every penny".

Cash-strapped Britons are looking to make savings. They are buying more cheaper own-brand food from supermarkets, cutting back on subscription streaming services such as Netflix and cancelling repair warranties on domestic appliances.

NielsenIQ's data also showed a 15.9 percent decline in sales on a value basis of beers, wines and spirits over the four week period year-on-year.

"It is clear that as cost-of-living increases continue, retailers will be under pressure to ensure they have consumer mindsets front of mind, which are set to focus more on economizing on the number of items purchased," Mike Watkins, NielsenIQ's UK head of retailer and business insight said.

NielsenIQ said total sales at UK supermarkets fell 1.8 percent on a value basis over the four weeks year-on-year, with a slight decline in the average number of items in the basket - 11.2 versus 11.5.

ALSO READ: UK PM to be probed over 'Partygate'

Market leader Tesco was the only retailer of Britain's big four grocers to gain market share on a value basis.