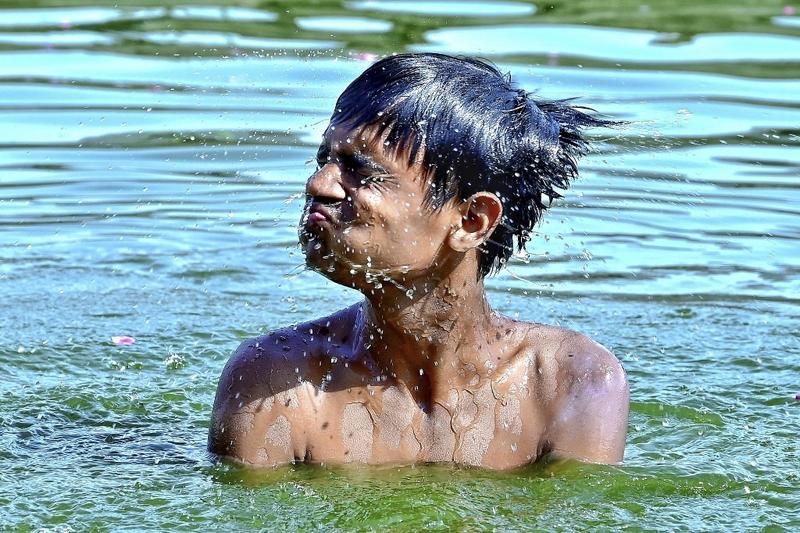 A youth cools off in a pond during a hot summer day in Ajmer, Rajasthan state, India on April 6, 2022. (SHAUKAT AHMED / AFP)

Extreme heat continued to scorch large swathes of south Asia this week, offering no reprieve after the hottest March on record in India, and triggering comments from Prime Minister Narendra Modi on India getting too hot too early.

Maximum power demand in India surged to a record high on Tuesday, and is seen rising by as much as a tenth next month. The India Meteorological Department has warned of worse heatwave conditions in the coming days.

The unprecedented heat puts millions of blue-collar workers, including construction and farm laborers and those working on factory shop floors, at great risk. Sunstrokes have claimed thousands of Indian lives in the past.

Industrial disruption and widespread power cuts are also bad news for corporate India, as economic activity has just started to pick up after months of stagnation amid coronavirus lockdowns.

A rapid rise in power demand has also left India scrambling for coal, the dominant fuel used in electricity generation. Coal inventories are at the lowest pre-summer levels in at least nine years and electricity demand is seen rising at the fastest pace in nearly four decades.

A train shortage is exacerbating the crisis, with India's power secretary telling a court-ordained meeting this week that train availability was 6 percent lower than required.