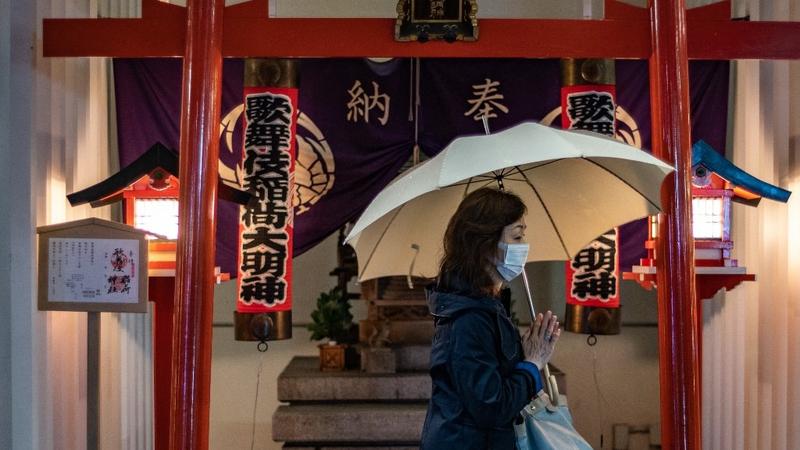 A woman walks after she prayed at the shrine of Kabuki-za theater in Ginza district of Tokyo on April 15, 2022. (PHILIP FONG / AFP)

TOKYO - The International Monetary Fund has lowered its forecast for global economic growth in 2022 to 3.6 percent, and slashed its growth forecast for Japan by 0.9 percentage points to 2.4 percent, given multiple factors weighing on the country's economic recovery.

Some experts believed that due to COVID-19 response worldwide and geopolitical tensions, international commodity prices have been on the rise, the global supply chain has been disrupted, with imported inflation battering the Japanese economy.

Some experts believed that due to COVID-19 response worldwide and geopolitical tensions, international commodity prices have been on the rise, the global supply chain has been disrupted, with imported inflation battering the Japanese economy

In the context, corporate profits and private consumption have been squeezed, they said.

Following two years of contraction in 2019 and 2020, Japan's economy was back on the track of slow expansion in 2021, with real gross domestic product growing by 1.6 percent. However, domestic demand had a small contribution of 0.6 percentage points to the economic growth, due to waning consumption and declining investment.

Since the beginning of this year, the central bank of the United States, the Federal Reserve, has been more firmly on the hawkish stance in light of a 40-year high inflation, hinting a widening gap of interest rate between the yen and the US dollar. The yen, losing ground, has depreciated further, amplifying the impact of surge in international commodity prices on the Japanese economy.

According to the Nikkei's currency index of the world's major currencies, the yen was devalued by 5.7 percent in the first quarter of this year. The yen has plummeted more than 10 percent against the US dollar since March.

Amid growing concerns that a weaker yen would harm economic recovery, Kengo Sakurada, chairman of the Japan Association of Corporate Executives, one of Japan's three largest business groups, said the yen was too much devalued.

According to a media survey, 76 percent of companies surveyed said they would find it difficult to cope with the situation, where the yen falls below 125 to the US dollar, while 94 percent said they could not withstand a level of 130 yen to the US dollar.

The sharp depreciation of the yen has worsened Japan's current account balance. The current account surplus has been shrinking since August last year, slipping into deficit in December and widening to about 1.19 trillion yen (10.35 $billion) in January 2022, due to rising import prices and Japan's deteriorating trade balance, according to data from the Finance Ministry.

The Nikkei estimated that Japan's current account deficit will widen to 16 trillion yen (139.16 billion dollars) in fiscal 2022 if the yen trades at 120 to the US dollar and crude oil prices rise to 130 dollars a barrel.

Coupled with sharp depreciation of the yen, mounting imported inflationary pressure has caused burden on businesses. According to the Bank of Japan, the country's corporate inflation index has risen for 13 consecutive months year on year, hitting 9.5 percent in March this year, as import prices continued to surge.

As Japan has been facing deflation pressure for a long time, and the COVID-19 pandemic has repeatedly dampened the sluggish domestic demand, Japanese companies are generally cautious about raising prices, and many companies have not passed on the rise in raw material prices to retail prices, leading to great pressure on their operations.

According to the BOJ's short-term economic survey released earlier this month, the sentiment index of large manufacturing companies declined in the first quarter, while the expectation of short-term performance of companies in all industries deteriorated.

BOJ Governor Haruhiko Kuroda said that cost-push inflation is different from the demand-expansion inflation expected by the central bank. Instead of stimulating consumption, it will restrain consumer demand, which is not conducive to Japan's economic recovery, he said.

According to a recent survey of 36 economists by the Japan Center for Economic Research, Japan's economy is likely to slip into negative growth in the first quarter of this year.