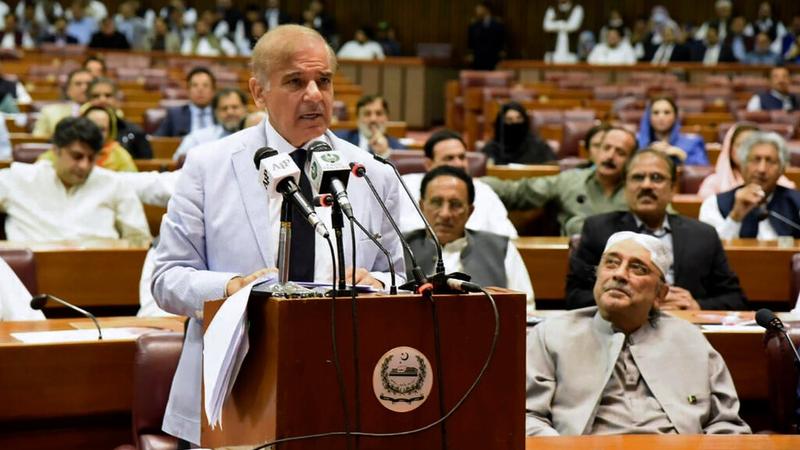 ISLAMABAD - Pakistan is ready to join hands with China to deepen bilateral cooperation and elevate relations between the two countries to a higher level, which is the voice of over 200 million Pakistani people, the country's newly-elected Prime Minister Shahbaz Sharif has said.

In a meeting with Pang Chunxue, charge d'affaires of the Chinese embassy in Pakistan, at the Prime Minister House in Islamabad earlier this week, Shahbaz noted that the Pakistan-China friendship is unique, unshakable and deeply rooted in the hearts of the people of the two countries.

Newly-elected Prime Minister Shahbaz Sharif noted that the Pakistan-China friendship is unique, unshakable and deeply rooted in the hearts of the people of the two countries

Whenever Pakistan was faced with internal, external difficulties or  major challenges, China has always stood firmly with Pakistan, he said, adding that Pakistan regards China as its steadiest friend and closest partner.

Every Pakistani government has been committed to promoting friendship with China and no one in the world can undermine this friendship, the Pakistani prime minister said.

Major development has been witnessed in Pakistan-China relations in recent years, and bilateral cooperation in political, economic, diplomatic and other fields has been deepened in an all-round way, opening a new chapter in the construction of the China-Pakistan Economic Corridor (CPEC), he said.

The CPEC is not only a major project of mutual benefit, but also a precious gift from the Chinese government to Pakistan, Shahbaz said, adding that Chinese enterprises have overcome numerous difficulties and challenges to facilitate Pakistan's development.

After the completion of a number of CPEC energy projects, Pakistan's energy shortage situation has rapidly improved, he said, adding that Pakistan would have still been short of electricity without those projects.

China seeks peaceful development and win-win cooperation, and the CPEC is a very illustration of that, Shahbaz noted.

Pakistan will continue to increase input into the CPEC, work with China to expand cooperation fields, and overcome all bottlenecks and obstacles to speed up the CPEC construction, he said, adding that Pakistan will make every effort to ensure the safety of Chinese institutions and personnel in Pakistan.

Pakistan welcomes more Chinese investment in its agricultural modernization, industrialization and digitalization and hopes that more Chinese enterprises will set up joint ventures in Pakistan and export products produced in this country to China and the rest of the world for mutual benefit and win-win results, Shahbaz said.

In his maiden address to the National Assembly of Pakistan or the lower house of the parliament after being elected as the country's prime minister on Monday, Shahbaz said that developing Pakistan-China relations is the most important thing and a priority in Pakistan's diplomatic policy, noting that China is a time-tested friend of Pakistan and the great and eternal Pakistan-China friendship can never be shaken by anyone.