Confident Rahm eager to take next major step at Masters 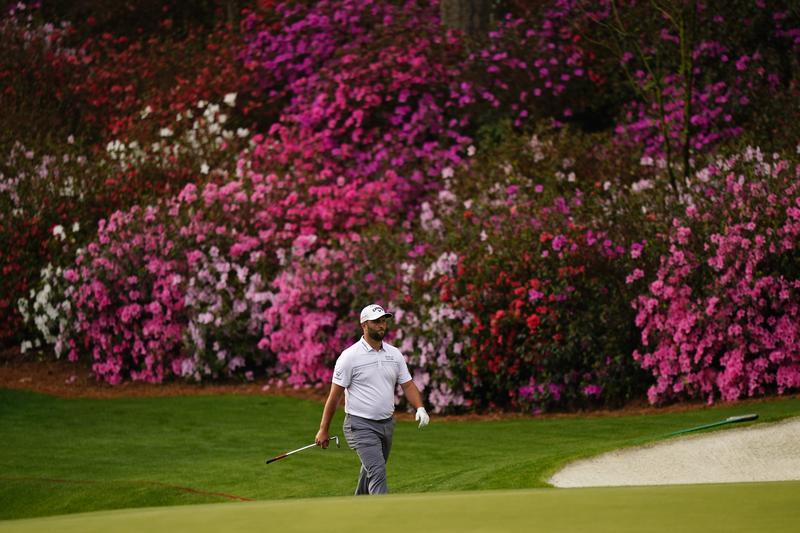 Jon Rahm, of Spain, walks to the 13th green during a practice round for the Masters golf tournament on April 5, 2022, in Augusta, Georgia. (MATT SLOCUM / AP)

AUGUSTA, Georgia - Jon Rahm is the betting favorite this week at Augusta National and unlike last year the Spaniard has had time to settle in and prepare for the year's first major after arriving late at the 2021 Masters following the birth of his first child.

Despite being limited to one nine-hole practice round last year after his late arrival at Augusta National, Jon Rahm finished in the top 10 for a fourth consecutive year

The US Open champion has been one of the most consistent competitors at Augusta National since making his Masters debut in 2017 but almost every time has had to conjure up a late-surge just to get within striking distance of the leaders.

"I've been there. I've done it, and I know I can play good here," said world No 2 Rahm. "Hopefully ... I get to the back nine on Sunday a little bit closer, not needing a crazy back nine to get the win."

Despite being limited to one nine-hole practice round last year after his late arrival at Augusta National, Rahm finished in the top 10 for a fourth consecutive year.

The Spaniard is so comfortable playing at Augusta National that he is in the midst of a 15-round stretch where he has shot even par or lower, a streak that began in the second round of the 2018 Masters.

The extra time on site this week has been put to good use since Augusta National has lengthened both the par-four 11th and par-five 15th holes while a number of greens have changed.

"It was nice to have the week off last week, get the practice in at home, and then this week see how the course is doing and see the changes," said Rahm.

"We're always eager to see what little tweaks the members have done to the golf course, and it looks fantastic as usual. So I'm excited to get it going."

Rahm's best result this season has been a runner-up showing at Kapalua in January where he carded a would-be record-breaking 33-under over four rounds only to finish one stroke back of Cameron Smith.

The Spaniard says he refuses be distracted by outside noise about him being the favorite this week to join compatriots Sergio Garcia (2017), Jose Maria Olazabal (1999, 1994) and Seve Ballesteros (1983, 1980) as a Masters champion.

"I couldn't care any less what the odds say. I mean, I'm not looking at it," said Rahm. "I like to think I'm the favorite myself in my mind, right?

"But I'm not worried about what the other players are doing. I'm just going out there to shoot the lowest score I can, and hopefully that's enough. I never really pay attention to that."