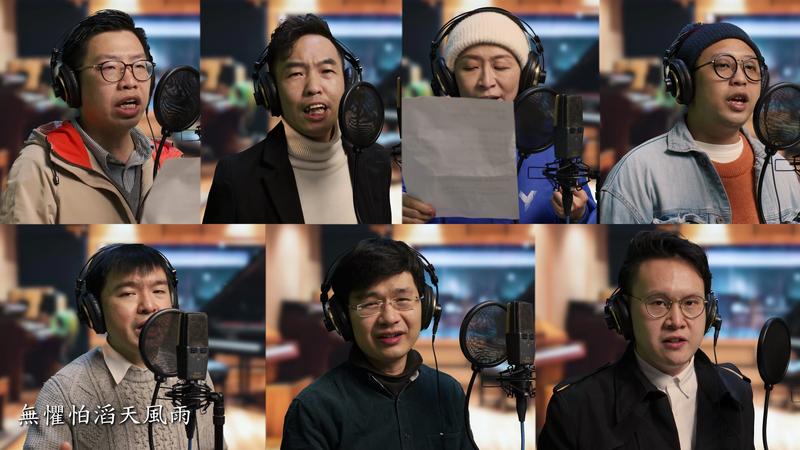 “Hong Kong Will Stand Strong” — a Cantonese pop song that Lam Pak-Keong, a high school physics teacher, wrote in February — has gone viral on the internet with more than 300,000 views on a number of social media networks.

Its inspiring lyrics and easily hummable vocals, encouraging the city’s residents to thrive in the face of the Omicron outbreak, have made it a success.

“In addition to teaching knowledge, contributing the best of my ability to Hong Kong society is also the responsibility as a teacher,” said Lam, who is also a committee member of the Hong Kong Federation of Education Workers.

The song stands out from original music created by other local aficionados as it highlights the spirit of Lion Rock — fearlessness, perseverance, and the will to overcome difficulties collectively — that’s deeply rooted in the marrow of Hong Kong residents’ unyielding bones when confronted with a bitter adversity

“I want to utilize my enthusiasm about music and create exhilarating songs to give people a glimpse of hope, especially when they are desperate because of the pandemic.”

The song stands out from original music created by other local aficionados as it highlights the spirit of Lion Rock — fearlessness, perseverance, and the will to overcome difficulties collectively — that’s deeply rooted in the marrow of Hong Kong residents’ unyielding bones when confronted with a bitter adversity.

“Hong Kong will stand strong, Hong Kong will never lose. The future is in our grasp if we combat the virus united and confidently”: The lyrics are not ensconced in personal emotions and feelings like many other pop songs.

The main rhythm of the song consists of eight chords. Veering away from intense beats, the song is soothing, slowly rising and then coming down gradually — as a bird that flies high in the sky before finally landing in its warm nest.

Lam said he was very saddened when he saw so many people losing their loved ones because of the pandemic. The song’s beats are incorporated with his sympathy and resolution of solidarity to fight the pandemic.

The feisty city experienced a tumultuous period before the number of confirmed cases showed a downward trend — the caseload had swelled to tens of thousands a day between Feb 25 and March 25.

Lam said he was heartbroken when he heard at the start of the fifth wave that one of his students and several families had tested positive but could not access any resources. Struggling to hold back tears, he said the only thing they could do was self-isolate at home.

“Those people need spiritual support. It was the time for us to leverage the quintessence of community care and mutual assistance,” Lam said.

Lam, who dreamed to be a musician as a child, got the idea for the song’s melody on a weekend afternoon when the city’s face-to-face classes were suspended due to the surging cases. As Cantonese is a versatile and adaptable language with nine tones, “Hong Kong Will Stand Strong in Cantonese corresponds to six notes in music, I created the rhythm of the song based on the Cantonese tones for half an hour, and spent another two hours writing the lyrics,” Lam said. 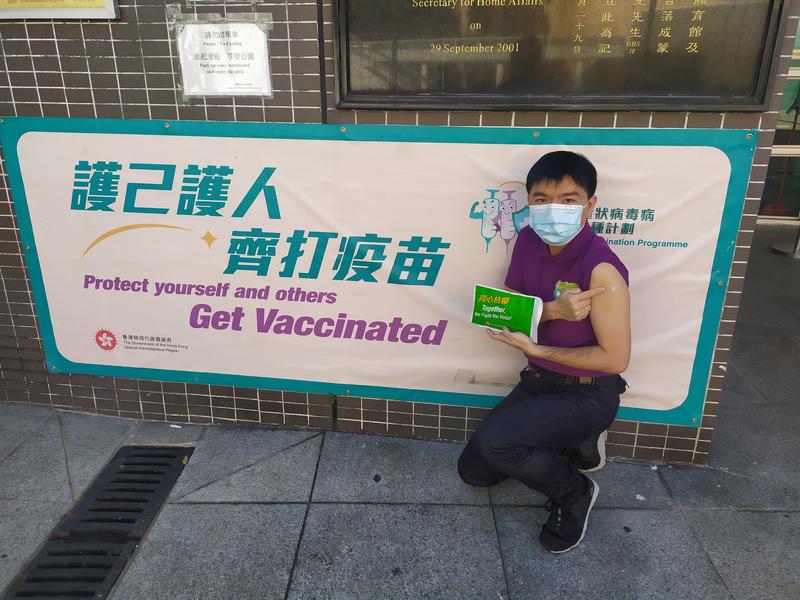 Lam Pak-keong poses for a photo after getting the third vaccination jab outside Tseung Kwan O Sports Centre on Dec 16, 2021. (PHOTO PROVIDED TO CHINA DAILY)

“May the city overcome the coronavirus fearlessly with our country’s aid. May our home stand strong with our love and care,” the lyrics say.

ALSO READ: Driving to the front line in pandemic fight

The Chinese mainland has ensured that vegetable supplies continue to flow into Hong Kong during the city’s lockdown, with tens of thousands of anti-pandemic items, such as personal protective equipment, rapid antigen test kits and traditional Chinese medicine being sent to the city. Construction teams and medical workers also arrived to help build community isolation facilities and care for patients. 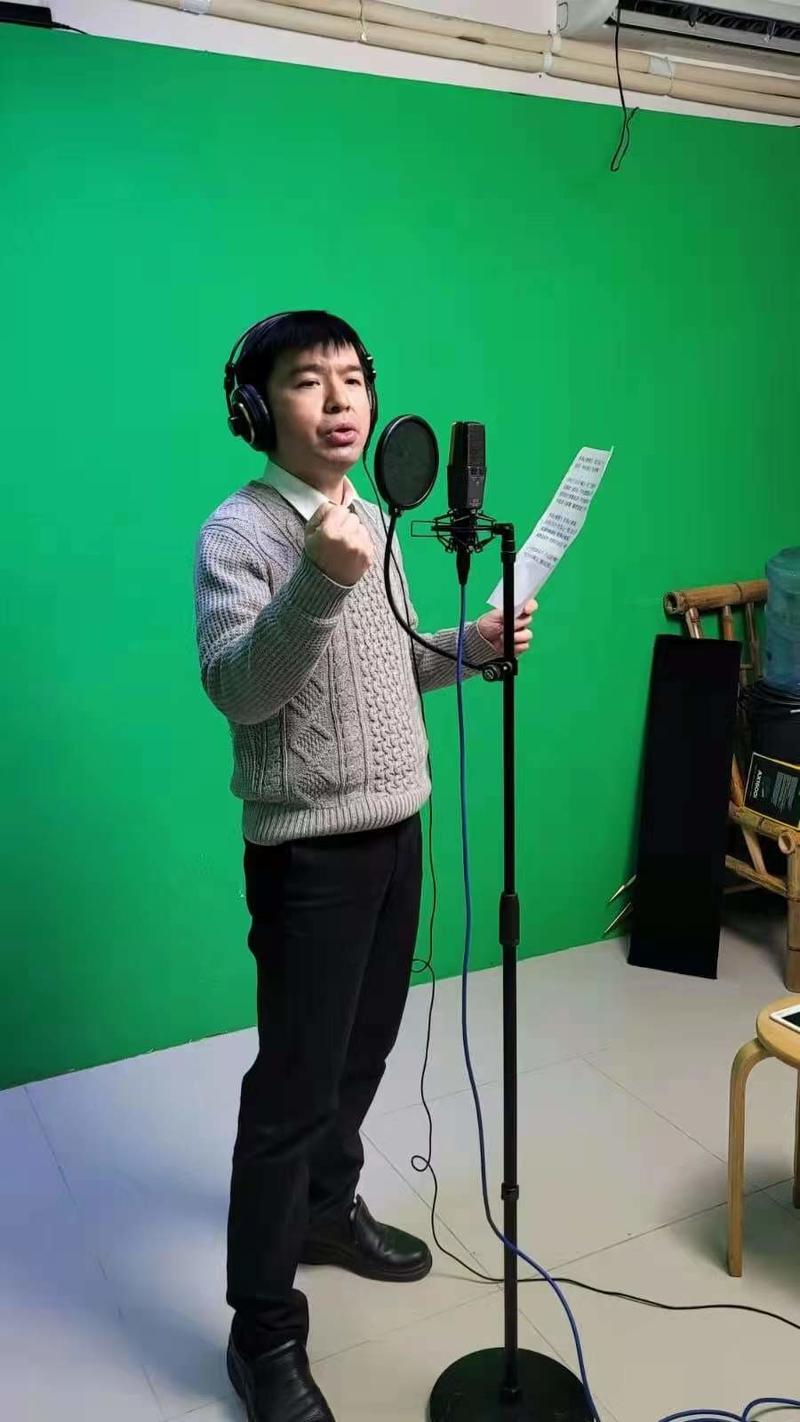 Lam said he believes Hong Kong can defeat the coronavirus with the support of the central government, as “it gives us confidence.”

“I hope Hong Kong residents will feel a little bit of warmth in this song, as there is someone supporting them and loving them,” he added.

The song, with several local key opinion leaders joining in, was released on YouTube on Feb 27. Numerous people posted their feelings after listening to the song below the video, with remarks such as “Come on, Hong Kong!”, “Thanks for sharing the song with positive energy, it makes people fill up with confidence”, and “Support Hong Kong! We can definitely beat COVID-19.”