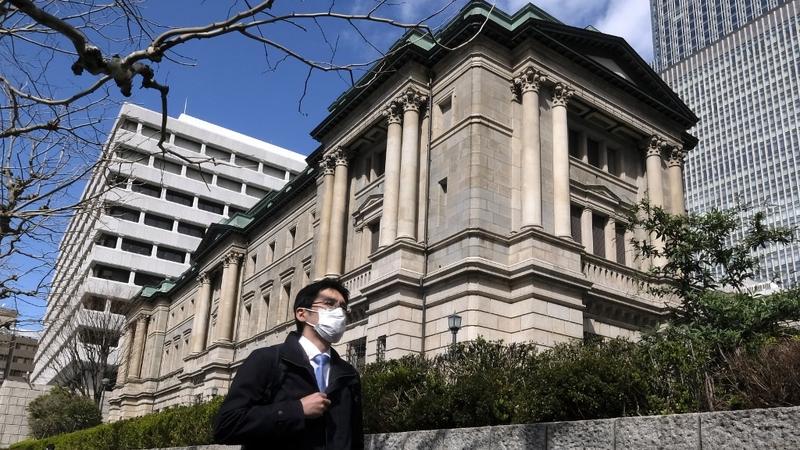 In this file photo taken on March 16, 2020, a pedestrian walks in front of the Bank of Japan headquarters in Tokyo. (KAZUHIRO NOGI / AFP)

The Bank of Japan's intervention comes as it seeks to keep monetary policy ultra-loose, even at the cost of fueling further yen falls, which could push up import costs and hurt the economy.

The yield on benchmark 10-year Japanese government bonds retreated from a more than six-year peak on Wednesday, falling 1.5 basis points to 0.23 percent

The BOJ on Wednesday increased purchases of Japanese government bonds with maturities of three to 10 years by a combined 450 billion yen ($3.66 billion) in Wednesday's market operations. The central bank also offered to buy 250 billion yen in super-long JGBs in unscheduled, emergency operations.

"The BOJ will increase the number of auction dates and the amount of outright JGB purchases as needed, taking account of market conditions," the BOJ said in a statement.

The move bolsters the BOJ's intervention in the bond market, running from Monday through Thursday, with an offer to buy unlimited amounts of 10-year government bonds at 0.25 percent.

"The BOJ is trying to strengthen its message to the market, that it's strongly committed to keeping financial conditions in Japan very accommodative and won't accept those kinds of higher long-term bond yields," said Masayuki Kichikawa, chief macro strategist at Sumitomo Mitsui Asset Management.

"We need to remember the official BOJ target is 0 percent for the 10-year JGB, not 25 basis points."

The yield on benchmark 10-year Japanese government bonds retreated from a more than six-year peak on Wednesday, falling 1.5 basis points to 0.23 percent. It declined as much as 2 basis points to 0.225 percent following the BOJ's announcement.

"We decided to take the step because the entire yield curve was under strong upward pressure, heightening the risk of the 10-year yield exceeding our upper limit," a BOJ official told Reuters on Wednesday's announcement.

Under yield curve control, the BOJ sets its short-term rate target at -0.1 percent and that for the 10-year JGB yield around 0 percent.

Its current guidance is to allow the 10-year yield to move flexibly, as long as it is below an implicit 0.25 percent ceiling set around the target.

Struggling against the tide of rising interest rates globally, the BOJ on Monday took the rare step of offering to buy unlimited amounts of 10-year JGBs at 0.25 percent twice in a single day.

It also announced a plan to continue buying the note in unlimited volumes at the 0.25 percent fixed rate from Tuesday to Thursday.

"The BOJ has long reduced bond purchases through stealth tapering but due to strong upward pressures on yields they can no longer be curbed unless it conducts fixed-rate operations," said Hiroaki Muto, economist at Sumitomo Life Insurance Co.

"It's aggressively buying JGBs by increasing its purchases and fixed-rate operations."