Heavy rains in Australia trigger fresh round of flood evacuations 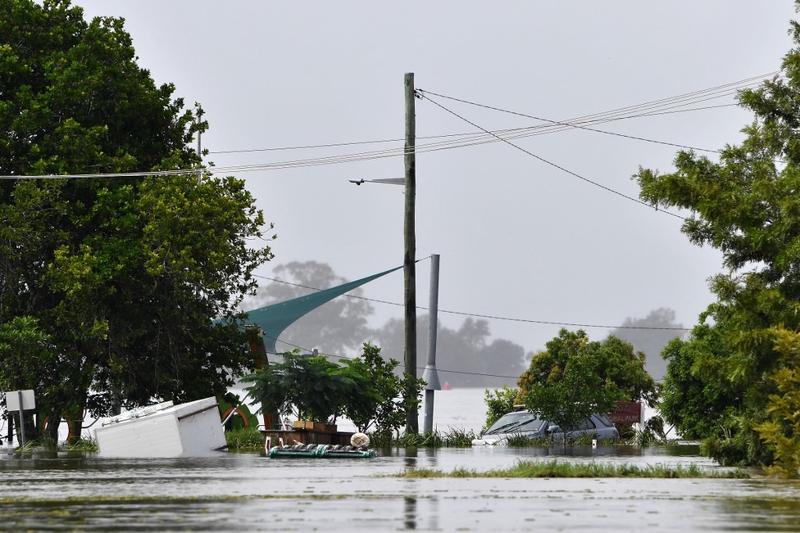 A general view of a flooded street is seen in Lawrence, some 70 kilometers from the New South Wales town of Lismore, on March 1, 2022. (SAEED KHAN / AFP)

SYDNEY - Heavy rains drenched east Australia on Tuesday, triggering evacuation orders for thousands of flood-weary residents for the second time this month as authorities warned the intense weather is likely to persist for the next 24 hours.

The death toll from the latest floods rose to two as a man was found dead in Queensland state after his vehicle became stuck in floodwaters.

Several towns across northern New South Wales and southeast Queensland were still battling to clear tonnes of debris after devastating floods earlier in March killed at least 21 people and swept away hundreds of farms, houses and livestock

Several towns across northern New South Wales and southeast Queensland were still battling to clear tonnes of debris after devastating floods earlier in March killed at least 21 people and swept away hundreds of farms, houses and livestock.

Many buildings inundated a month ago in some of the worst-hit regions are expected to be flooded again, New South Wales Emergency Services Minister Stephanie Cooke told reporters.

"It is an unfortunate reality of the current situation that we are facing," Cooke said.

Amid the recovery efforts, the Bureau of Meteorology on Tuesday warned of potentially life-threatening flash floods along the northern New South Wales coast across a distance of more than 500 kilometers. There could be isolated rainfall of up to 300 millimeters in some regions over six hours, the weather bureau said.

With rising river levels, residents in the northern New South Wales town of Lismore, among the worst-hit by the record floods a month ago, were ordered to evacuate by Tuesday afternoon.

"We are very much in the hands of the gods today," Lismore mayor Steve Krieg told Channel Nine television on Tuesday. Krieg said another deluge within weeks while residents were getting their lives on track "just really drains you emotionally and mentally."

"Just another, here we go again," Lismore business owner Paul Sullivan told broadcaster ABC, after clearing his shop to limit any flood damage. "At least after the water does come in, there is nothing here that can sort of get pushed out into the gutters."

Television footage showed residents grabbing sandbags from emergency services before fleeing their homes. About 3,300 military personnel will remain in the flood-hit regions to help evacuate residents, the Department of Defence said.

Amid criticism over slow relief, Prime Minister Scott Morrison, behind in polls in an election year, has declared the floods a national emergency and designated catastrophe zones in flood-stricken towns which will receive extra recovery funds.

Summer on Australia's east coast has been dominated by the La Nina weather pattern, typically associated with increased rainfall, for the second straight year, with many rivers already near capacity before the latest drenching. Some places received around 280 millimeters of rain over a 24-hour period up to 9 am on Tuesday, official data showed.