Thousands of residents lend a hand in latest COVID-19 wave 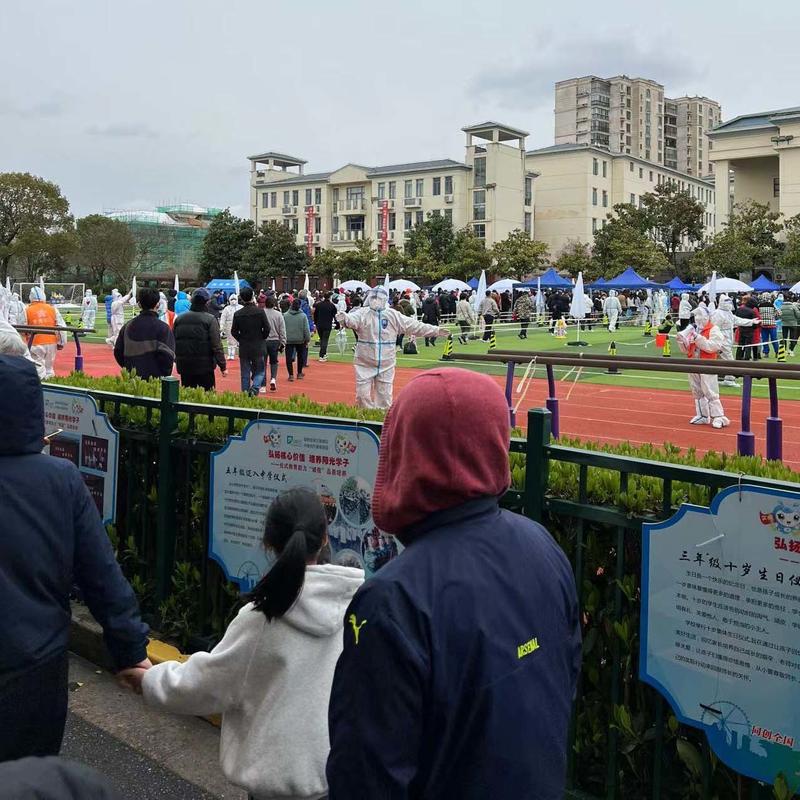 A photograph taken by a resident of the Cannes Town gated community in Shanghai, which is home to about 40,000 people, shows volunteers helping to organize nucleic acid tests during a citywide grid-screening process. (PHOTO PROVIDED TO CHINA DAILY)

Elsie Chao, 31, who has lived in Shanghai for six years, has rich experience as a volunteer in caring for the elderly and children in her home city of Hong Kong and also in Europe.

In Shanghai, she has had her first experience of volunteering in the public health sector, helping with a novel coronavirus grid-screening program from March 18 to 20 in the neighborhood where she lives in Pudong district.

"Quite a few residents here come from different countries and regions. As I have lived in Europe, I can help communicate with them, and I also took the initiative to contact neighborhood officials," Chao said.

When I saw medical professionals working day and night, I also wanted to contribute in one way or another.

Eva Serrano, volunteer at a neighborhood in Jing’an district, Shanghai

She helped explain the grid-screening plan to local residents and expatriates, prepare a QR code for nucleic acid tests, and also maintained order at the location.

"The entire country has lent a helping hand to Hong Kong throughout its latest wave of COVID-19, and I'd like to do my bit for Shanghai, my second home," she said.

More than 50,000 residents in the city, which has a population of nearly 25 million, have joined volunteers such as Chao since the start of this month in helping with the ongoing fight against a COVID-19 outbreak.

They responded to more than 2,000 related projects published via official channels online and offline and worked in different positions.

Zheng Yinghao, deputy director of the Shanghai Municipal Civilization Office, said, "These residents braved rain and winds on the frontline in the fight against the epidemic and have stood out in helping the city through this challenging period.

"Their warm-hearted gestures have been widely appreciated. The volunteers act as a 'business card' in showing the city's soft power."

Chao said the work was intensive, demanded patience, and lasted until midnight every day, but it was worthwhile and she felt she could help fellow residents in different ways.

Due to language barriers, expatriates might experience problems when asked to line up and undergo testing in neighborhoods. Chao said she helped explain the grid-screening plan, which is aimed at stopping infections spreading. 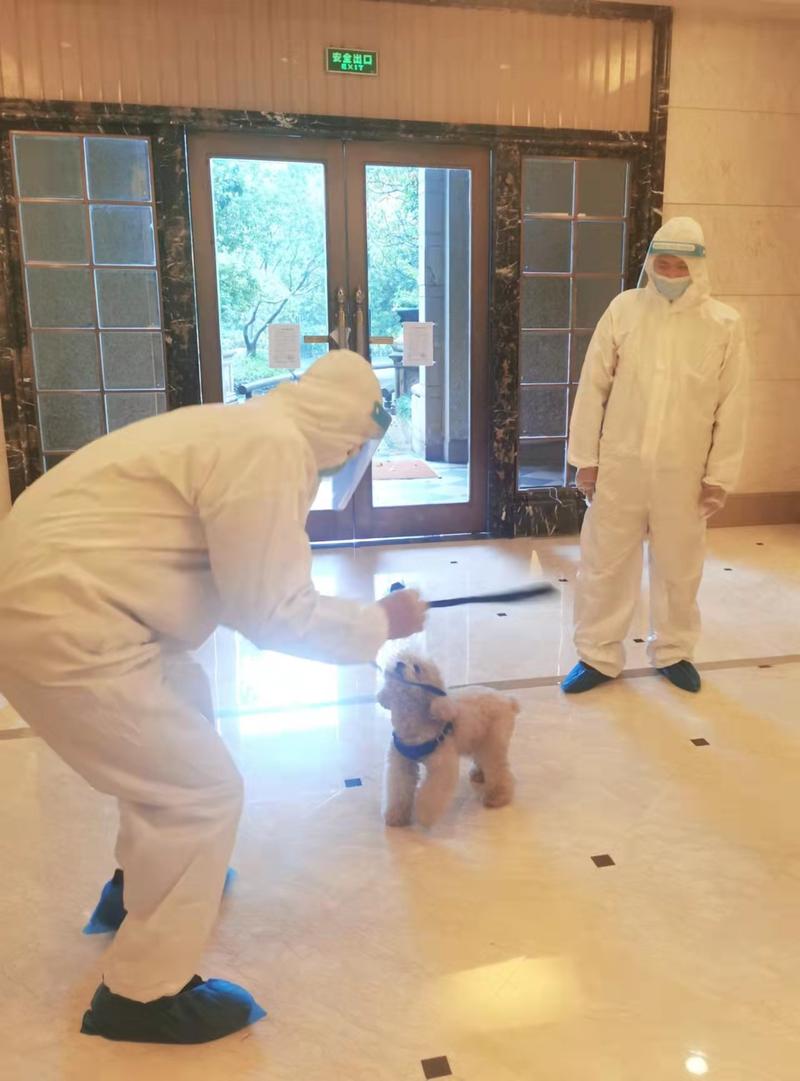 Volunteers prepare to walk a resident's dog in a neighborhood locked down in Shanghai's Minhang district. (PHOTO PROVIDED TO CHINA DAILY)

At Cannes Town gated community, which is home to about 40,000 residents, more than 1,200 locals formed a volunteer contingent to cooperate with grassroots workers, medical professionals and police officers during the outbreak.

Resident Wang Bin, 34, who is acting as a volunteer, said, "Having seen the spread of the local outbreak continuing to accelerate in recent weeks, I couldn't sit still at home anymore. I wanted to do something to help."

He said testing at the community usually takes place from 8 am to 8 pm, a period during which many volunteers refrain from eating, drinking and going to the restroom in order to save time and having to change protective clothing.

"When I was handed a protective suit and goggles, I felt deeply proud. It was the most meaningful day for me so far this year," Wang said.

His job was to partner a fellow volunteer in guiding lines of residents－20 each time－from their building to the testing venue, and then escort them home, ensuring that the team of residents kept a distance from each other and other teams throughout the process.

The volunteers took care of the elderly and people in wheelchairs or with young children, and also checked each resident's identity card.

Wang said it was raining hard one day and many people complained as they waited in lines that did not move for more than half an hour.

"Only when I helped with the work did I realize just how difficult it is to organize people in a community with hundreds of tall buildings to undergo the tests in an orderly way. I constantly comforted them and helped those in need go through the green channel," he said.

"The temperature was only 7 C one night. I am short-sighted, so I need to wear glasses, but I had to frequently wipe raindrops from my protective shield. It is also hard to breathe in protective gear," he added.

Wang said he began to count the number of those he escorted for testing, but he gradually lost track. The last lines of residents awaiting tests were finally dealt with at 10 pm. All health workers and volunteers were also tested.

"After six days' hard work, I could sense that there were numerous workers on the frontline and also those toiling behind the scenes who have an affection and passion for the city at grassroots level to ensure that life continues as normally as possible. We really should express our gratitude to all of them," Wang added.

Li Min, 46, head of the neighborhood volunteers, said there were far more applicants for these jobs than the number of places to be filled.

She said some volunteers' suggestions prompted changes to the testing plan. "For example, the number of testing venues was raised from one to four to minimize the distance residents had to travel in such a huge neighborhood with nearly 300 high-rise buildings and also the chances of them gathering together."

Li suggested that pre-job training be improved to enable volunteers to better coordinate with each other. This would also help agreement to be reached on those granted access to green channels－avoiding disputes among residents. 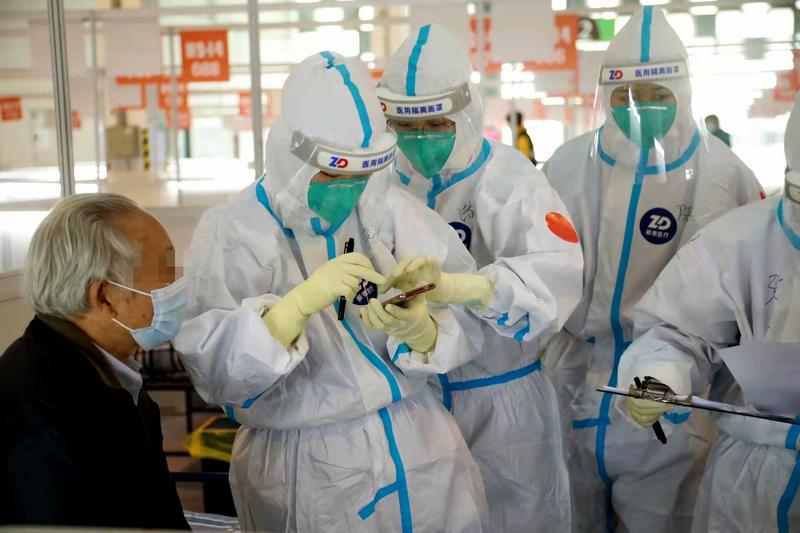 A medical worker helps a patient register at a quarantine area in the city. (YE JIAQI / XINHUA)

In some neighborhoods with a high proportion of foreign residents, expatriates joined volunteers in explaining the grid-screening plan to their peers, telling them how to prepare the health QR code, and also helping to organize nucleic acid tests.

Eva Serrano, president of fashion retailer Inditex China, helped with nucleic acid testing at a residential neighborhood in Jing'an district. Like all other volunteers, she donned a blue vest bearing the words "keep 1 meter away from each other" on the back.

"All of society shoulders the responsibility for epidemic prevention and control work. When I saw medical professionals working day and night, I also wanted to contribute in one way or another," said Serrano, who registered herself and eight colleagues as volunteers.

Some expatriates working in Shanghai, especially those in the fields of medicine and public transportation, have also contributed to ensuring a public service by continuing to do their jobs.

Like many of his colleagues, Maskay Ashish, an orthopedic surgeon at Shanghai United Family Hospital, who comes from Nepal, took his sleeping bag to the office to ensure he could continue to serve the community in case buildings were locked down. More than 20 percent of the doctors at the hospital are from different parts of the world.

In 2017, Ashish founded Bloodline, a nonprofit association that encourages blood donations. Last week, 34 people who are registered with the association donated blood. Ashish, who has lived in Shanghai for 18 years, said he and his colleagues at the association would now help in the public health sector.

When some residential buildings and neighborhoods were locked down, volunteers and grassroots workers looked after animals for pet owners.

Shen Wei lives in a neighborhood in Minhang district that was locked down for 10 days from March 13. She tried everything she could, but her dog stubbornly refused to do at home what it normally does during a walk.

She finally turned to the property management for help, and workers and volunteers in protective suits walked her dog in the rain for long periods.

"They made time to care for a dog. During these challenging days for the city, the approach shown by these workers and volunteers has been heart-warming," said Shen, who used her phone to take footage of them at work.

A pet store owner surnamed Zhu, who had to undergo home quarantine, left animals unattended in her shop, and was greatly relieved to find volunteers willing to feed them.

In Shenyang, Liaoning province, unattended pets were sent to specialized "boarding homes" for care after testing negative for the virus, while their owners underwent hotel quarantine.

In Shenzhen, Guangdong province, volunteers replenish food and water for dogs left alone at home, walk them and deal with their waste.

In Tianjin, the control center said owners undergoing hotel quarantine can be accompanied by their pets.

Jiang Ziyi contributed to this story.