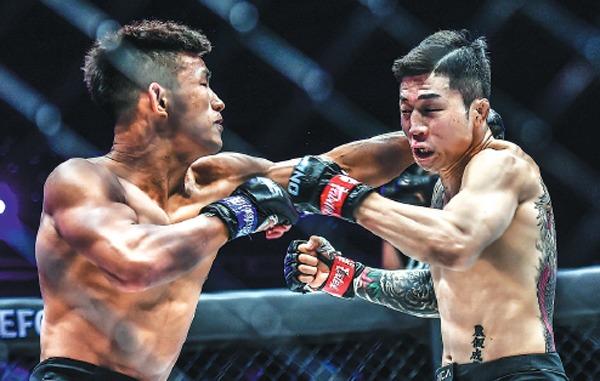 China's Tang Kai knocks out Kim Jae-woong of South Korea with a left hook in the first round of their featherweight bout at ONE: X－an event that marked the 10-year anniversary of ONE Championship－on March 26, 2022 at Singapore Indoor Stadium. Tang secured a title shot at the division's current world champion, Thanh Le, with his sixth straight win. (PHOTO PROVIDED TO CHINA DAILY)

With a Chinese fighter stealing the show at an event to celebrate ONE Championship's 10th anniversary, the Singapore-based mixed martial arts promotion has vowed to keep punching its way into China's sports mainstream.

Despite being pushed back for a year amid the COVID-19 pandemic, ONE: X lived up to the hype as "the biggest MMA event ever" on Saturday, with a massive night of 20 bouts on three cards serving up a real treat for fight fans at Singapore Indoor Stadium.

From Angela Lee's successful defense of her atomweight world title to the mixed-rules super-fight between decorated MMA star Demetrious Johnson and Muay Thai legend Rodtang Jitmuangnon, the adrenaline-fueled action across a variety of disciplines, including MMA, kickboxing and Brazilian jiujitsu, blew away the combat sports world.

ONE chairman and CEO Chatri Sityodtong believes the event will go down in MMA folklore.

"I think this is one of those events for the martial arts community where five, 10 and 20 years from now everyone will still be talking about it," Sityodtong told China Daily in an exclusive online interview on Friday.

"Because it's so rare and unique in terms of the scale of the event, global viewership numbers and also the fact that you have the best in the world from all combat styles coming together. No organization ever tried to do this before," added the Thai-born entrepreneur and Muay Thai instructor.

As the only Chinese fighter on the 20-bout card, striker Tang Kai represented the birthplace of ancient martial arts in style by knocking out top-ranked Kim Jae-woong in their heated featherweight matchup on Saturday afternoon

As the only Chinese fighter on the 20-bout card, striker Tang Kai represented the birthplace of ancient martial arts in style by knocking out top-ranked Kim Jae-woong in their heated featherweight matchup on Saturday afternoon.

Tang, a product of Shandong-based Sunkin International Fight Club, opened the bout conservatively by exchanging jabs and low kicks with Kim, known as the "Fighting God". But when the South Korean lunged in with a right hand, Tang countered with a devastating cross-hook combination that dropped Kim to the canvas. Tang followed up with two ground strikes to seal the deal with about a minute left in the first round.

By taking out the division's No 1 seed and securing his sixth straight win since signing up with ONE in 2019, Tang (13-2) earned a shot at featherweight world champion Thanh Le, who appeared to accept a call-out after the fight.

"I always keep my word. I proved that I am the better fighter with my punches rather than talking trash," Tang said of Kim's dismissive prefight comments about him. "I am super confident in my striking skills and the power of my punches."

Addressing Sityodtong, who watched from the stands, Tang added: "Boss, I want to fight the title fight. I want to fight Thanh Le. I will not just win, I will crush him."

Underlined by Tang's rise, the untapped potential of Chinese MMA athletes has convinced ONE Championship that China deserves a more prominent place on the world stage than it has now.

"China is the birthplace of martial arts and it should play a big role in ONE given that we're an Asian-based promotion," said Sityodtong.

"I think Chinese athletes have the talent and potential to be world champions and they are very close.

"I'm very confident that, with the culture and history of martial arts in China, the future is very bright."

In a statement of intent from ONE, Chinese-born Annie Li was appointed president of ONE Championship China in August last year.

Creating appealing online and TV content-in particular encouraging fighters to connect with fans on social media-are key strategies for ONE to navigate through the challenges live sport is facing due to the pandemic, according to Li.

"The growing appetite for combat sports in China has been significant, highlighted by the popularity of combat classes at gyms among young urbanites and the trending content on social media," said Li.

"Combined with the cultural heritage of martial arts in China, this paves the way for MMA to make deeper inroads in a sustainable way in China," she added.

As the first major international MMA promotion to host live fights in China, ONE has staged 12 live events in six Chinese cities since its debut in Beijing in 2014 until the outbreak of COVID-19 in late 2019.

From four fighters in 2016, ONE has so far signed 67 Chinese MMA athletes to official contracts and keeps expanding its talent development system in the country with cooperation from sports schools, MMA gyms and media partners.

The Chinese version of its Road to ONE talent selection reality show, produced with SMG and streaming website Migu, proved a huge hit when released last year on multiple platforms. On Douyin alone, the show's content was viewed 7.25 million times.

The program has also produced promising talents, such as 18-year-old Zhang Peimian, who defied long odds in his ONE debut to defeat the experienced Josh Tonna of Australia with a second-round TKO in a strawweight bout on March 11.

Despite the current pandemic-related challenges of staging live events, Sityodtong is taking a long-term view of helping to develop MMA in China.

"We believe at ONE we celebrate the same values that China celebrates-integrity, honor, humility, respect, courage and discipline," he said. "For us to honor and showcase Chinese culture, Chinese heroes, Chinese stories is the essence of ONE."