With its plastic-free packaging having reduced the carbon footprint of every bottle of water, a leading Southeast Asian soft-drinks brand, beWater, has now shifted its attention to the production of water itself, in order to protect scarce groundwater resources.

BeWater, the eco-friendly brand that originated in Vietnam, turned its focus on the global problem of water shortage with its expansion into the larger Asian market, including Singapore, Hong Kong, and the Maldives.

The beWater products use municipal supplies, the majority of which come from aboveground reservoirs and purely processed existing supplies. This avoids further degrading critical infrastructure that supports growing urban populations.

Overconsumption of groundwater has led to sharp declines in water tables across Asia, with the Mekong Delta, Beijing, Vietnam, and Indonesia most affected. One contributing factor is that larger water utilities companies continue to siphon fresh water from underground supplies.

“Although Hong Kong’s main sources of water are natural catchments and from the Pearl River, it is still an issue we should concern ourselves with for a better tomorrow,” said Paragon Trading Asia Chairman and CEO Christopher Liang.

Paragon is a premium producer and distributor of eclectic fine and rare wines and spirits from New Zealand, Ireland, and Southeast Asia. It prioritizes the use of environmentally friendly packaging alongside natural, organic raw materials of the finest quality.

But the United Nations predicts there will be a global shortage of fresh water within this decade. The theme of this year’s World Water Day (on Tuesday, Mar 22) is “Groundwater — Making the Invisible Visible”, to raise awareness of the threat to sustainable water security.

More than 30 percent of the planet’s available fresh water is stored in underground aquifers that underlie every continent. According to WorldWaterDay.Org, almost all of the global fresh water is groundwater. Two-thirds of Earth’s underground fresh water is tapped for agricultural use, with the remaining being used by over 2 billion people who rely on this now-threatened resource for their daily survival. 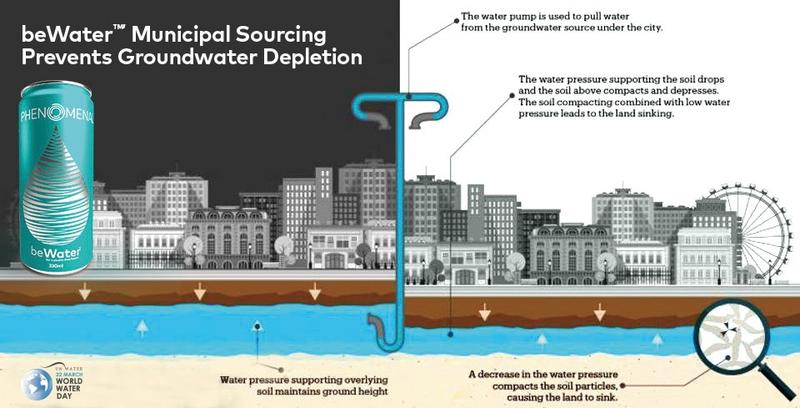 According to the World Resources Institute, most countries will no longer have enough water resources to meet their domestic demand by 2040 — a mere 18 years away. Although the ongoing health crisis and geopolitical uncertainties are dominating global headlines today, the impact of climate change and environmental damage in this regard should not be ignored, as the future of humanity hangs in the balance.

In addition to being overused in many areas, groundwater has also become increasingly polluted — a major problem that can take decades to recover from, affecting the lives of those who depend on groundwater as a vital resource.

BeWater strives to be part of this solution, as it believes in responsible value chain management. That means everyone owns their accountability for ensuring clean, safe, and structurally sound habitats of the future.

For example, its product Phenomenal beWater is not just water in a can. It is produced from municipal water sources and filtered via an ISO-certified advanced reverse osmosis process as well as UV light for a fresh and clean taste; it is a viable alternative to plastic-bottled water and is convenient to enjoy.

BeWater believes its goal is achievable because it is not working alone, but with the support of public-private partnerships, including that of its strategic partner, Ball Corporation, which is the only plastic-free water provider in the market.

The beWater cans are produced by Ball Corporation — a Fortune 500 company, the world’s largest aluminum packaging manufacturer, and a leading sustainability advocate.

Working with Ball allows beWater, a pioneer of “real circularity” in the water industry, to take a lifecycle view of its products, as it also provides crushing stations to enable the easy collection of empty cans for recycling.

Based on the company’s development strategy, it hopes to attain a market share of at least 20 percent in Hong Kong, as well as over 10 percent in the wider region, including Japan, South Korea, Thailand, and first-tier cities in the Chinese mainland, within the next five years.

To promote Tuesday’s World Water Day, Liang has been involved in several initiatives, including working with 100°C to spread beWater’s message of creating a single-use plastic-free future. 100°C seeks to raise public awareness of crucial global issues and promote lasting change by bringing influential figures in art, design, and architecture together. Its name represents the social and environmental issues that are reaching a boiling point, and its initiative is to compel people to act for social impact as soon as practicable.

Join beWater in its mission to eliminate single-use plastic bottles and improve our world with better water.

Phenomenal beWater is available in cases of 24 x 330ml from Christopher Liang at christopher@bewatertoo.com