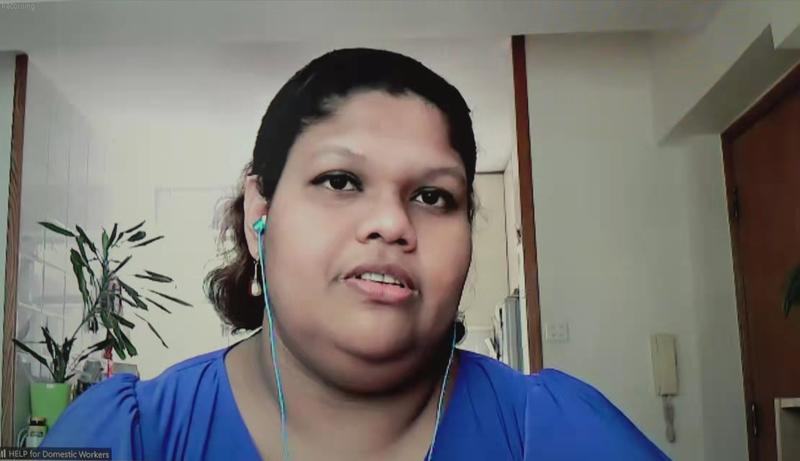 HONG KONG — Increased incidence of mental health problems in the world in the past two years has often been referred to as the silent pandemic. In Hong Kong, human rights lawyer Manisha Wijesinghe can attest to how COVID-induced stress, anxiety and depression have affected one of the city’s most vulnerable groups — domestic workers.

Wijesinghe is the executive director of HELP for Domestic Workers, a Hong Kong-based NGO that supports migrant domestic workers. She said that HELP has partnered with some organizations in 2021 to provide free one-on-one counseling for domestic workers grappling with stress, depression or grief.

She said that in the past two years, more domestic workers have been coming to the group’s centers, burdened by fear, anxiety and depression. They fear not only being infected by the virus but also losing their jobs and how this will affect their families back home who depend on them.

“A lot of domestic workers were not able to go back to their home countries for more than two years. (Most of) these domestic workers are women. Many of them are mothers or wives, they haven't been able to see their families and a lot of their families are going through financial difficulties. We have had clients who have lost family members back home who haven’t been able to go to their (loved ones’) funerals, who had crisis in their families and not being able to be there (with them),” Wijesinghe said.

She said it is important to provide intervention, such as counselling, as early as possible before it evolves into a bigger problem that might drive people to harm themselves. HELP also wants to eliminate the stigma of seeking professional help for mental health.

“(Going to a) counselor doesn’t mean that there is something wrong. It just means that you need that space to devote to your emotions,” Wijesinghe said.

While the pandemic has been hard on everyone’s mental health, it has been especially difficult for domestic workers, she said. Unlike most workers, domestic helpers live with their employers. They cannot leave their workplace and go home easily to deal with personal issues.

Sri Lanka-born Wijesinghe joined HELP in 2019, but has been working for migrant workers rights, justice and equality issues ever since she obtained her law degree at the Open University of Colombo in 2012.  For her, this is part of her personal journey. As a daughter of a single parent, Wijesinghe strove to achieve her life’s goals with the support of many people. And that support has enabled her to access solutions that pushed her forward in her mission.

Wijesinghe worked for the UNICEF Child Protection and Juvenile Justice Program, and Save the Children – Sri Lanka, another child welfare organization. Later she came to Hong Kong to pursue Master of Laws Degree in Human Rights at the University of Hong Kong. After graduating in 2014, Manisha worked at Christian Action (Migrant Domestic Worker Program) and at law firm Daly & Associates specializing in the area of migrant worker rights and international labor law.

Wijesinghe chose to support migrant workers because she can relate with their struggles. As a foreign student in HKU, she knew what it was to live in an overseas land, not being able to speak the native language and the difficulty of coping with loneliness and uncertainties.

“Those are things that I felt like I could speak very authentically about and I could connect with,” she said. Over 90 percent of Hong Kong's migrant domestic workers are women, and Wijesinghe “felt really strongly about supporting these women who are the breadwinners (of their families)”.

The past few weeks have been hectic for Wijesinghe and the rest of her team as the rising number of COVID cases has overwhelmed Hong Kong’s public healthcare system. In February, HELP launched a fund-raising campaign to support domestic workers who tested positive for the virus and needed medicine, food and isolation units in order to recover. The NGO has raised more than HK$1 million, and Wijesinghe said she “was so humbled” to see so many people responding to the group’s call for donations.

“I think it is quite a big operation to be supporting so many domestic workers at any given time,” she said. “So volunteering is a big thing that we do need, where we need people who will be willing to go and buy stuff on our behalf and then deliver stuff on our behalf to the workers.”