Work with China, not against it 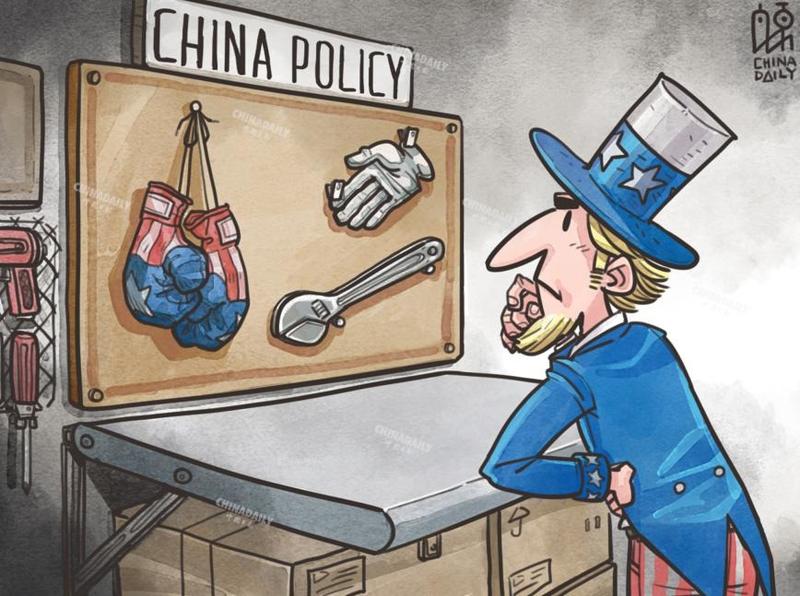 Most Western commentators take comfort in describing the tensions between the United States and China as the inevitable rivalry of two superpowers. But this camouflages an uncomfortable truth: that we are moving from a Western-constructed world into a post-Western world, with China leading the charge.

Thus, the geopolitical discord is not just over geopolitics or economics: it is also about race.

Racism tends to be seen as an intranational issue, and not often a factor in international relations. But consider the Beijing Winter Olympics, which was very successfully concluded in February. We saw a whirlwind of negative coverage levelled against China, and political posturing by Western leaders.

These criticisms are loudest in the Anglosphere countries — the US, United Kingdom, Canada, Australia and New Zealand. Leaders of four of those nations staged a diplomatic boycott of the Olympics in order to deny China a moment of global recognition.

The same moral posturing occurred during the Beijing Summer Olympics in 2008.

The Russia-Ukraine crisis is another example. What is unfolding is wholly unjustified and unacceptable.

Yet, no one called for the US and the UK to be banned from international sports events or to halt business with these two countries after the illegal invasion of Iraq and the destruction inflicted in Afghanistan, in which hundreds of thousands died.

This is hardly surprising. It is part of a larger trend in which the Anglosphere unites to portray China as genocidal and Orwellian within its borders; neo-colonial outside its borders; geopolitically, economically and militarily belligerent; and environmentally destructive.

All these are seen as stemming from China’s governance system.

The West’s professed respect for political plurality does not extend to China: instead, the Anglosphere must reinforce its carefully crafted international image as the cultural, economic and militaristic arbiter of the world.

This is what white privilege thrives on and how it operates on a global scale, and it can be seen not only in these Olympics, but in geopolitics, business, historiography, the arts and environmental narratives.

The key driver is the West’s need to retain its primacy over the global economy.

How the West alters the narrative on China

None of this is to suggest that China is above criticism, but it needs to be fair and constructive. Beijing certainly needs to give a better account of the development of the minority ethnic groups in the Xinjiang Uygur autonomous region.

The counterterrorism measures it has adopted in the remote autonomous region have aroused concerns over their scope and lack of transparency. Beijing’s engagement with African and smaller Asian nations is also likely to come under Western scrutiny.

Domestically, the practice of people’s democracy could create more room for the public to voice protest and criticisms of the government, even more so in its Hong Kong, Macao and Taiwan regions.

Yet in the Hong Kong Special Administrative Region the government had no option but to act after months of wanton violence inflicted on the city and its security apparatus. These actions, which are administrative obligations to protect public and common goods, elicit alarm in the international press which uses every opportunity to distort the reality on the ground, seemingly unable to provide a balanced view.

The undoubted challenges are often depicted as asymmetrical struggles between self-immolating Buddhist monks or teenage, stone-throwing Davids, on the one hand, and a terrifying communist Goliath on the other.

Yet in Hong Kong although the evidence was very clear that lethal weapons were being used including Molotov cocktails and bomb making paraphernalia, about which there was hardly any reporting in the international media.

Thus before a rush to condemn China as a dangerous dystopia, remember that the current dominance of the Anglosphere, and other European countries, largely arises from their bloody imperial legacy, much of which was genocidal.

Now, for the first time in centuries, they must reckon with the resurgence of a previously exploited and repressed non-white civilization that appears capable of surpassing them on many fronts.

The West is scared and reluctant to relinquish the privileges that come with hegemony. It therefore uses the global apparatus it has created to hinder China’s progress. Other non-white nations will be confronted in the same way if they pose a challenge.

One need look no further than the race-based Five Eyes Alliance, the world’s oldest international surveillance organization, whose members are the Anglosphere countries.

Formed in the post-war years, this anachronistic and secretive organization is today used by the West to keep China under close watch and to maintain the “international rules-based order”.

This world order is presented as the progenitor of peace and stability, and the benevolent nurturer of all nations through its economic models, governance systems, financial institutions, elite universities and more.

Criticisms of the order from Western peers are seen as honest disagreements and are quickly repaired. Challenges from those outside the group — say from China or the Middle East — are seen as dangerous and uninformed.

For example, while the West has strongly criticized China’s influence in Hong Kong as an attack on civil liberties, and placed sanctions on the territory, the fact is that Hong Kong was disgracefully seized by Britain as part of its remorseless 19th century campaign to force opium on an unwilling China, and it remained an autocratically ruled British colony until 1997, with no democracy to speak of.

The storming of the US Capitol in one day of January 2021 was depicted as an affront to constitutional government, but the ransacking of Hong Kong's legislative building and wanton destruction of its transport infrastructure, private businesses and violence against law enforcement officers and anyone who do not share their political beliefs —as part of ugly, nativist protests that engulfed the city in months of 2019—is portrayed as a heroic stand for freedom.

National security agencies are called upon to deal with anti-vax protests in the Canadian capital Ottawa, but when Beijing invoked national security grounds for Hong Kong to handle the far more violent Hong Kong disturbances, it was roundly condemned.

Similarly, China’s interactions with Africa are presented as predatory, ignoring the West’s appalling history on that continent.

As Samuel P. Huntington states in The Clash of Civilizations and the Remaking of World Order: “The West won the world not by the superiority of its ideas or values or religion … but rather by its superiority in applying organized violence. Westerners often forget this fact; non-Westerners never do.”

Unsurprisingly, many African leaders say they prefer doing business with China. According to official figures, from 2013 to 2018, China gave $42.26 billion in aid, and directly invested $43.4 billion, across 50 African countries, while paying nearly $1.5 billion in taxes to host countries.

China built 13,000 km of roads and railways and undertook more than 80 other large-scale infrastructure projects. Chinese foreign investment projects created, annually, some 18,600 new jobs in Africa between 2010 and 2019. China was, therefore, the leading investor in the continent in terms of job creation.

Yet, the Western narrative almost entirely centers on false claims that China is trapping African nations in debt.

Controlling narratives like this is central to the West’s benevolent self-portrayal. The atrocities of the colonial period, and even more recent atrocities from the war on terror, with nearly a million casualties, are brushed aside.

It is why the Anglosphere is fixated on Xinjiang but has already moved on from the 75,000 Afghan military and police officers, as well as the more than 71,000 Afghan civilians, who were killed during the US invasion of Afghanistan.

The Anglosphere also weaponizes environmental narratives against China. It frequently decries China as the world’s biggest CO2 emitter to detract from the fact that countries like the US, Australia and Canada are far greater emitters per capita, and from the West's far greater historical contribution to our planetary crisis.

China's per capita CO2 emission is around 7 tons per person, whereas emissions in the US, Australia and Canada sit between 15 to almost 19 tons per person. A similar scenario can be said of India which has even lower per capita emissions.

The West has also used, and continues to use, environmentally destructive processes to fuel its economic development, while criticizing China for using these same processes and refusing to make any allowance for the developmental challenges it faces (in a country twice the population of the entire Anglosphere).

This allows the West to conveniently ignore that China’s drive for common prosperity is already further ahead than them with regards to reducing environmental impacts, and is thus much closer to what a sustainable nation might look like.

Indeed, China is the world leader in solar technology, and the Greater Bay Area (with more than seventy million people) is fast becoming the global leader in sustainable public transport, far outstripping any equivalent in the Anglosphere.

The fact that China can lift millions out of poverty, and continuously grow its economy, while emitting less than half the CO2 per capita of the US, suggests that China’s substantial efforts are rooted in sound polices and hard working.

By shifting the blame onto China, rather than taking responsibility for damage to the biosphere, the Anglosphere is able to avoid criticism for repeatedly failing to meet any of the objectives it has set itself—from the Kyoto Protocol to the Paris Accords—and thus retains its position of global adjudicator on environmental issues.

It's time for dialog with China

China has a long way to go and has much to do to improve — politically, diplomatically and environmentally. But it is important to be aware that Beijing is acutely aware of this and the scale of the challenge.

Given China’s size, it is on a learning journey without historical precedent. It needs to be more transparent with the global community, but portraying it as an irresponsible rogue state, or part of a “new axis of evil,” is simply wrong, and the relentless adoption of an anti-China bias is toxic.

The Anglosphere’s criticisms of China are an attempt to justify its white moral authority, intellectual superiority, and push for democracy as the only legitimate political system. It is also a double standard.

The dire condition of America’s migrant camps on the border with Mexico, rife with disease and sexual abuse, or Washington’s grisly use of torture at Guantanamo Bay and Afghanistan, are not equated to failings of the democratic system.

Yet, a comparison of the same magnitude is readily made between Xinjiang and the ideologies of the Communist Party of China.

It is, however, in China’s interest to come clean and work with bodies like the United Nations to reassure the world about its policies towards the Uygurs and other minorities.

It certainly must vigorously contest the accusation of genocide, which has not found broad support in the Islamic world, and which even The Economist — a paragon for Western neoliberalism — says is wrong.

By the same token, it is only fair that Western nations and their allies who are accused of war crimes—in Afghanistan, Iraq, and Palestine—also allow independent investigations to be carried out.

The Anglosphere  has been gripped by the alleged mistreatment of a Chinese tennis star, but what about the appalling fate of Julian Assange at the hands of the Anglosphere, who surely has done more than any other journalist to expose the extent of Western war crimes?

Instead of clinging to its ideas of national, racial and cultural superiority, the Anglosphere should seek a major reset and broker a meaningful dialogue with China. The non-white world also needs to have renewed faith in its own values and judgments.

As we move into a new world order, this can be a chance for new systems of collaboration and plurality to emerge — by working with China rather than against it.

The author is the founder and CEO of Global Institute for Tomorrow and author of Dismantling Global White Privilege: Equity for a Post-Western World.