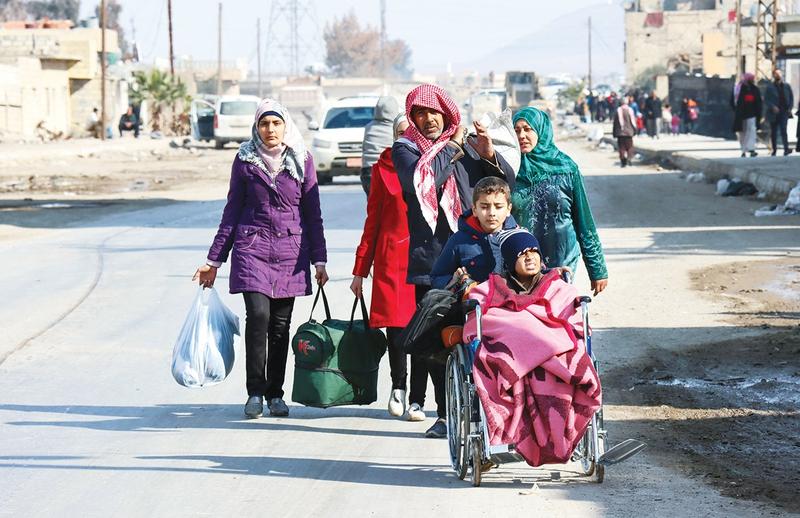 Syrians flee their homes in the Ghwayran district of Al-Hasakah Province on Jan 22, the third day of fighting reportedly between the Islamic State group and Kurdish forces in the area. (PHOTO / AFP)

In his 16 years as an international humanitarian aid worker, Hussein Hassan has survived two assassination attempts, a terrorist attack, an air strike, and clashes between factions.

“In Yemen, I survived two incidents … an air strike and armed clashes between two warring parties in Taiz. While crossing a front line aiming to negotiate a humanitarian corridor to break the two-year siege on Taiz city, I was caught up in between a fighting of the (rebel) Houthis and the government’s armed groups,” Hassan said.

The Taiz incident illustrates just one of many dangers that humanitarian aid workers in the Middle East often face as they seek to deliver assistance to the needy. The Middle East and North Africa, or MENA, region is considered one of the riskiest places for workers due to its long history of civil wars, factional infighting, geopolitical conflicts and foreign interference, among other issues.

In the Middle East countries, Syria recorded the most attacks on workers, with 40 workers attacked in 19 incidents, ranking fourth globally in such violence. Yemen recorded 8 attacks involving five incidents. In the Occupied Palestinian Territories, there had been 2 attacks on workers. Globally, South Sudan topped the list, followed by Mali and then Afghanistan.

The attacks ranged from air strikes to assaults, as well as shootings, kidnappings, and bombings. The attackers come from all fronts: government forces, insurgents or rebels, and coalition groups backed by foreign governments.

Some of their victims include workers from global humanitarian aid organizations such as Doctors Without Borders, and Save the Children, as well as the United Nations.

It defines “major incidents” as killings, kidnappings and attacks that result in serious injury. Violence spans airstrikes; assaults, including rape and sexual violence; explosions from landmines and improvised explosive devices, or IEDs; and kidnapping and shooting incidents.

Aid workers are defined as the employees and associated personnel of not-for-profit organizations — both local and international — that provide material and technical assistance in humanitarian relief contexts.

However, they do not cover peacekeepers, human rights workers, election monitors, political, religious or advocacy organizations and hospital staff not supported by humanitarian organizations.

Arhama Siddiqa, a Middle East researcher at the Institute of Strategic Studies Islamabad, or ISSI, in Pakistan, said attacks on humanitarian workers in the MENA region have become a “modern passage of arms” and is close to becoming the new normal in what she called as “one of the most turbulent regions in the world”.

In a March 2021 report by the Stockholm International Peace Research Institute, an organization dedicated to research into conflict and armaments, the United States remained the largest arms exporter, increasing its global share of arms exports from 32 percent between 2011 and 2015 to 37 percent in the 2016-20 period.

The US supplied major arms to 96 states from 2016 to 2020. Almost half of the US arms transfers, at 47 percent, went to the Middle East, with Saudi Arabia accounting for 24 percent of the US exports. Russia was the second-largest arms exporter, followed by France and Germany.

Siddiqa said arms sales to countries such as Saudi Arabia under the pretext of creation of more jobs at home, as former US president Donald Trump laid out at a defense roundtable on Oct 20, 2018, have exacerbated the risk of the weapons falling into the wrong hands.

“Poverty and malnourishment in these regions have fueled not only intolerance, but as a way to survive … impelled the poor populace to join mercenaries and terrorist mafias which have led to attacks on humanitarian workers, where cash incentives are offered,” she said.

At the start of this year, incidents involving civilians and aid workers continued to hound the MENA region.

Since civil war in Yemen broke out in 2014 after the Houthis’ seizure of Sanaa, Yemen has been divided into factions. Apart from the Houthis, some areas are being controlled by the Southern Transitional Council, a secessionist movement in South Yemen, and anti-Houthi forces opposed to the government.

The Houthis, also known as Ansar Allah, are a group of militias that emerged from northern Yemen in the 1990s.

On Jan 18, the UN called for restraint over escalating conflict in Yemen, which has already seen an alarming number of air and drone strikes this year, notably against civilians and non-military targets.

In Syria, the UN humanitarian coordination office on Jan 13 condemned increasing violence and the slaying of an aid worker in al-Hol, the largest camp for displaced people and refugees in the country. The killing followed an armed attack on a health facility in the camp, according to the UN Office for the Coordination of Humanitarian Affairs.

Siddiqa said that given the widespread risks and hurdles that humanitarian workers continue to face, the UN Security Council’s resolution 2286 needs to be reaffirmed since it lays clear emphasis on the protection of medical and humanitarian personnel.

In May 2016, the UNSC adopted the resolution, which was co-sponsored by more than 80-member states, that strongly condemns attacks and threats against the wounded and sick, medical personnel and humanitarian personnel engaged in medical duties, their means of transport and equipment, as well as hospitals and other medical facilities.

“Countries need to implement this resolution on (the) ground and incorporate it within their respective laws,” Siddiqa said, warning that failure to do so could increase the risks of violence against aid workers.

Hussein Al-Suhaili, chairman of Tamdeen Youth Foundation, a nonprofit organization formally established in 2013 in Yemen, has come close to becoming a victim himself a few times.

“The humanitarian work environment in Yemen is fraught with risks and complications due to the multiplicity of parties to the conflict, the collapse of services, and the armed groups imposing their own laws on the population, controlling local revenues and taxes, and obstructing the work of UN organizations,” Al-Suhaili said.

“I move between the fiefs of war and the geography of the conflicting parties with great caution and have been interrogated by armed groups dozens of times,” he said.

He thinks that one of the reasons for the prolonged war in Yemen is the exclusion of civil society groups, the youth and women in political negotiations by the international community to facilitate consultations between conflicting parties in the country.

Noura Ghazi, a Syrian human rights lawyer and executive director of Nophotozone, a group providing legal assistance to families of detainees and missing persons in Syria, said humanitarian workers in Syria face many challenges where any person who delivers humanitarian aid could be considered a “terrorist”.

Syria has been divided into enclaves after protests against President Bashar al-Assad’s administration erupted in 2011, broadening into a full-fledged civil war the following year.

An estimated 600,000 have been killed in the war and has displaced millions, according to the Syrian Observatory for Human Rights. The UN and the World Bank estimate that rebuilding Syria would cost around $250 billion to $400 billion.

Ghazi, who is also a nonresident fellow at the Tahrir Institute for Middle East Policy, a nonprofit organization headquartered in Washington, had been involved in providing legal assistance to a British-Indian doctor, Abbas Khan, who did some humanitarian work in Syria.

Khan died in December 2013 while in custody in Damascus. The Syrian government, according to media reports, claimed that Khan had committed suicide.

Ghazi, who claims her Palestinian-Syrian husband Bassel Khartabil who had advocated for free internet was executed in 2015, has not been back in Syria since 2018.

She hopes humanitarian aid to communities can be enhanced, especially in the areas of education, medical and economic services, so as to help refugees get back on their feet again and not depend much on others.

Siddiqa from ISSI said humanitarian agencies should step up efforts to ensure the participation of national aid organizations in security coordination platforms and mechanisms.

This includes partaking in activities such as ensuring that dialogues are carried out or translated into the national language and offering information and analysis that is inclusive of, and relevant to, the operational needs of local aid workers.

“That said, donors should support investments aimed at skill-set development and duty of care to national staff and support the strengthening of national partnerships,” Siddiqa added.