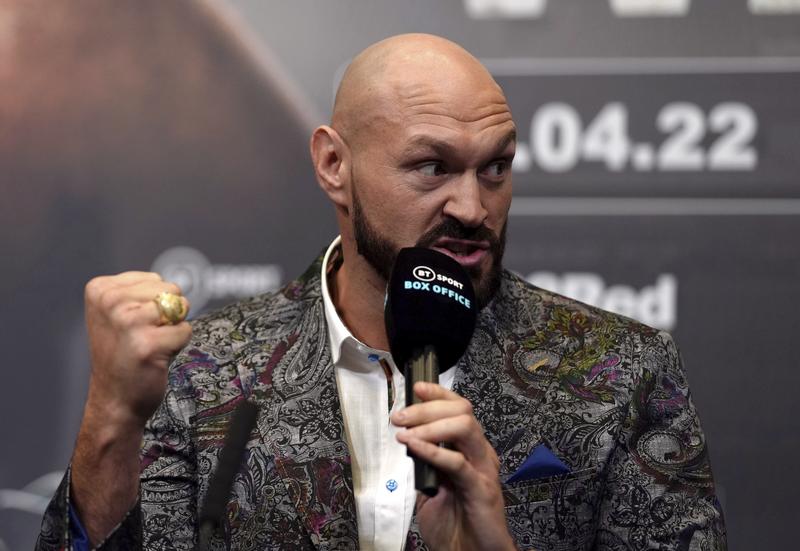 WBC heavyweight champion Tyson Fury said he is "supremely confident" of defeating Dillian Whyte when the two Britons meet in April with Fury's title on the line.

Whyte has been waiting years for a shot at the world title as the WBC's top-ranked contender.

"I am very, very confident," Fury told a news conference on Tuesday. "I am not down to earth — I am on top of it.

"There's not a 1 percent chance that I will lose the fight — I know I cannot lose. In the latter part of my career, I have to be supremely confident in my ability — which I am.

"If I am daft enough to get hit by him then I don't deserve to be heavyweight champion."

After months of drawn-out negotiations, Fury's co-promoter Frank Warren won the purse bid in January with an offer of $41 million, beating Whyte's promoter Eddie Hearn who was the only other bidder.

Fury is now set to receive 80 percent of the purse and Whyte the remaining 20 percent.

Whyte did not attend the event on Tuesday, opting to remain at his training camp in Portugal, with Fury and Warren saying he was unhappy about the terms of the contract.

"We ticked all the boxes and he signed the contract — at the last minute — and now he's trying to renegotiate." Warren said.

Fury, who has suggested on multiple occasions that he could walk away from the sport, addressed his potential retirement in the news conference.

The fight will take place at London's Wembley Stadium on April 23.