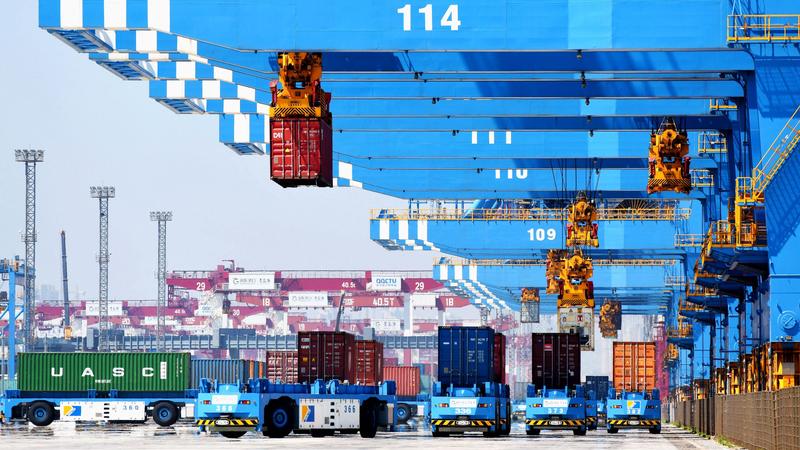 China will proactively align with high-level international economic and trade rules, to further deepen reform and expand institutional opening-up, according to senior commerce officials on Tuesday.

To that end, the country has been communicating and negotiating with the members of the Comprehensive and Progressive Agreement on Trans-Pacific Partnership, or CPTPP, and the Digital Economy Partnership Agreement.

Wang Wentao, the country's commerce minister, told a news briefing in Beijing that China is willing to negotiate and sign free trade agreements with more economies and countries

Wang Wentao, the country's commerce minister, told a news briefing in Beijing that China is willing to negotiate and sign free trade agreements with more economies and countries.

China's official applications to join the CPTPP and the DEPA last year have demonstrated the nation's determination to deepen reforms and expand opening-up, while also showing its sincere willingness to strengthen cooperation in international digital economy, and promote innovation and sustainable development, he said.

An FTA covering 11 Asia-Pacific economies that took effect at the end of 2018, the CPTPP is widely considered to have the highest standards for trade rules and market access.

The DEPA is a new type of trade partnership agreement on digital trade signed in 2020 by New Zealand, Chile and Singapore.

Vice-Minister of Commerce and Deputy China International Trade Representative Wang Shouwen said at the briefing that the country is willing to fully meet the high standards of CPTPP through active efforts.

"To join the CPTPP, China will make openness commitments exceeding all those in its existing free trade agreements for market access," said the vice-minister.

"That will not only facilitate China's expanding opening-up, pushing for high-level domestic reforms, and promotion of its high-quality development, but also widen market access to the world's second-largest economy for the 11 members of the CPTPP and help them to scale up cooperation with China in sectors including goods and services trade and investment."

Although the CPTPP content covers broad areas, with some provisions being quite complicated and sensitive, it is in harmony with China's progress in reform and opening-up, he said, taking examples of the provisions on State-owned enterprises and e-commerce.

According to Huo Jianguo, vice-chairman of the Beijing-based China Society for World Trade Organization Studies, the task of aligning domestic rules, regulations and management with high-level international economic and trade rules has become key to China's deepening of reforms and expansion of opening-up.

"What matters more is not merely expanding market entry, but rather, building a more transparent, fair and predictable business environment that levels the playing field for all market entities," Huo said.

Since China has showed its readiness to negotiate and make commitments to join the CPTPP, the country is expected to make more breakthroughs in expanding opening-up, he said.

ALSO READ: Why China must be in the CPTPP

According to Wang, the vice-minister, China has the right conditions to fulfill obligations of CPTPP rules on State-owned enterprises, because as independent market entities, China's SOEs base their operations on commercial considerations, and participate fairly in market competition with private and foreign-funded enterprises, and conduct business activities in accordance with market-oriented and law-abiding principles.

The core CPTPP provisions on SOEs ask for a level playfield for SOEs and other types of enterprises, and that is in line with China's ongoing market-oriented reforms of SOEs, he said.

The vice-minister also said the high-standard rules of the CPTPP on e-commerce are also in line with China's efforts to participate in global digital cooperation and continuously improve the business climate for the digital sector.

READ MORE: The world will benefit if China gains entry into CPTPP

Before officially applying for the CPTPP membership last year, China had conducted comprehensive and in-depth studies on CPTPP provisions, the vice-minister said, adding the country has already sorted out laws and regulations and reform measures that China needs to improve or modify for joining the agreement.

For any issue or clause of the CPTPP, China is ready to have detailed communications and negotiations with the CPTPP members concerned.