By Xu Weiwei in Hong Kong 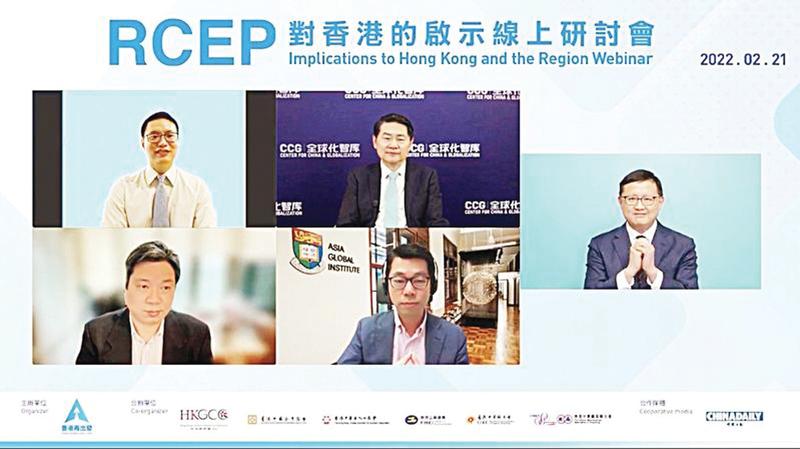 Within the greater environment and platform of the Regional Comprehensive Economic Partnership, the world’s largest free trade agreement, Hong Kong can transform itself to play the role of an efficient super-connector and super-intermediary between the member nations, experts said at a forum on Feb 21.

“As a highly export-oriented and open economy, free trade and regional multilateral cooperation are very important to Hong Kong,” said Brian Lo Sai-hung, Hong Kong’s director-general of trade and industry, who delivered the keynote speech at the virtual event named “RCEP: Implications to Hong Kong and the region”.

The forum, organized by the Hong Kong Coalition, focused on how Hong Kong enterprises can benefit from the RCEP.

As an independent customs territory, Hong Kong is not yet a member of the RCEP, so the discussions were also related to how Hong Kong can join the agreement, and the benefits that it will enjoy as a member.

The RCEP took effect on the first day of 2022. It includes the 10-member Association of Southeast Asian Nations, or ASEAN, China, Japan, the Republic of Korea, Australia and New Zealand. The 15 members’ total population, gross domestic product and trade all account for about 30 percent of the world total.

After the agreement takes effect, more than 90 percent of merchandise trade among members that have approved the agreement will eventually be subject to zero tariffs.

Lo said the Hong Kong Special Administrative Region’s government has been actively seeking to join RCEP at the earliest opportunity, and that it formally submitted the application to RCEP on Jan 21.

He said that Hong Kong has always pursued a free and open trade policy, abides by rules-based trade and investment arrangements, and is committed to deepening regional economic cooperation.

“Economic and trade ties between Hong Kong and RCEP member economies are getting closer,” Lo said.

In terms of the benefits of Hong Kong joining the RCEP, he said it can expand Hong Kong’s free trade network to the markets of Japan and South Korea that have not signed free trade agreements with Hong Kong.

Besides, the SAR government recently has been promoting reindustrialization in order to enhance its competitiveness.

He added that considering the tense geopolitics, rising trade protectionism and the COVID-19 pandemic, the SAR government is getting prepared for taking on challenges from the changing external environment.

“With the developments of dual circulation and the support of the 14th Five-Year Plan, Hong Kong as a facilitator of external circulation will play a better role under ‘one country, two systems’,” Lo said.

Wang Huiyao, founder and president of the Center for China and Globalization, said he is very confident that, in the post-pandemic recovery, the 21st century will be the Asian century.

“In terms of differences between the developed and the undeveloped, I think a better equilibrium can be achieved,” he said. “And there will be a totally new (regional) layout as a result. RCEP can strengthen stability in the region… and there will be better confidence among consumers.”

He said that, as the center of Asia, Hong Kong has some unique strengths: there are very high-quality professional services, huge network of retail sales, manufacturing and processing.

Wang proposes first putting together the resources to create an RCEP research center. His second suggestion is to build an “awesome international talent center” in Hong Kong, as the city is the most welcoming and most popular place for talent. And, the third one is to build a think tank alliance.

“Then we can build and discuss how we can further enhance and capitalize on RCEP for bigger benefits,” he said, suggesting building an RCEP demonstration area in Hong Kong as well as in Nansha, Guangzhou.

“We can also organize an RCEP annual conference in Hong Kong,” said Wang.

According to Wang, playing the role as a super-connector, Hong Kong can embrace further development. The city is not just China’s Hong Kong or Greater Bay Area’s Hong Kong; it is also as the center point of ASEAN. Thus the strengths of Hong Kong together with those of the Chinese mainland and RCEP can support Hong Kong’s development, he said.

Zhu Haibin, managing director and chief China economist and head of Greater China Economic Research at J.P. Morgan, said that looking at the RCEP members including the Chinese mainland, as well as likely the Hong Kong SAR in the future, he thinks there will be new opportunities for all.

“The RCEP is an important step in the gradual and steady process of Asia’s integration,” he said,

Zhu said the RCEP is more of an ASEAN initiative, not the Chinese one, but China is the biggest economy in the RCEP and its influence cannot be matched by other countries.

And China promotes globalization, the Belt and Road Initiative, and is a key founding member of the Asian Infrastructure Investment Bank and New Development Bank, and other regional arrangements. “So, they are complementary to the RCEP in promoting economic integration in the region.”

Also, he wants to look at the integration of Asia as a whole and the rise of Asia. “How can we make better use of this opportunity to improve (economic) development in mainland China and Hong Kong? That should be the focus,” he said.

Tang Heiwai, professor of economics and associate director of Hong Kong Institute of Economics and Business Strategy at the University of Hong Kong, said that there has been a downtrend in globalization in the past decade, and the trade chain has broken due to the COVID-19 pandemic.

But the Asian countries, especially the 15 RCEP member countries, are still embracing globalization and multilateral cooperation, with China obviously being the one that promotes globalization the most, he said.

As for the impact of not joining the RCEP, he said that the negative trade growth for non-RCEP members will be $25 billion in total, with the European Union and the United States suffering losses of $8.3 billion and $5.1 billion, respectively. And if Hong Kong does not join as a member of the RCEP, the SAR will lose $3.3 billion. “But as we all know, Hong Kong government has applied to be an RCEP member,” Tang said.

At the same time, he pointed out that there will be some non-trade benefits for Hong Kong as an RCEP member.

Apart from continuing to be an international finance, shipping and trade center, Hong Kong needs to become an international legal transaction and dispute resolution services center in the Asia-Pacific region, as well as an innovation center, culture and arts exchange center, and regional intellectual property trade center.

“So, these are things that Hong Kong should continue to develop as a super-connector. This role should be deepened,” Tang said.

“This is one way how RCEP can greatly help the business sector,” he said.

Also, for the RCEP, in terms of the services industry, member nations have to be open, and it should be a policy that facilitates foreign investments, he said.

“For Hong Kong businesses, we may have products that we would like to export to new markets,” Lau said. “At the same time, we also have professional services, logistics services, creative services in Hong Kong. So, the services sector can make use of the RCEP to expand the market in the 15 member nations.”

Commodity trade between Hong Kong and RCEP members is already huge, amounting to some $960 billion or 73 percent of the total commodity trade of Hong Kong.

Speaking of the opportunities for Hong Kong businesses, Lau noted that RCEP members are often still not familiar with one another, so they may need a middle partner and intermediary to facilitate trade.

“So this is also one strength of Hong Kong,” Lau said, adding that Hong Kong businesses can also help mainland businesses go overseas.