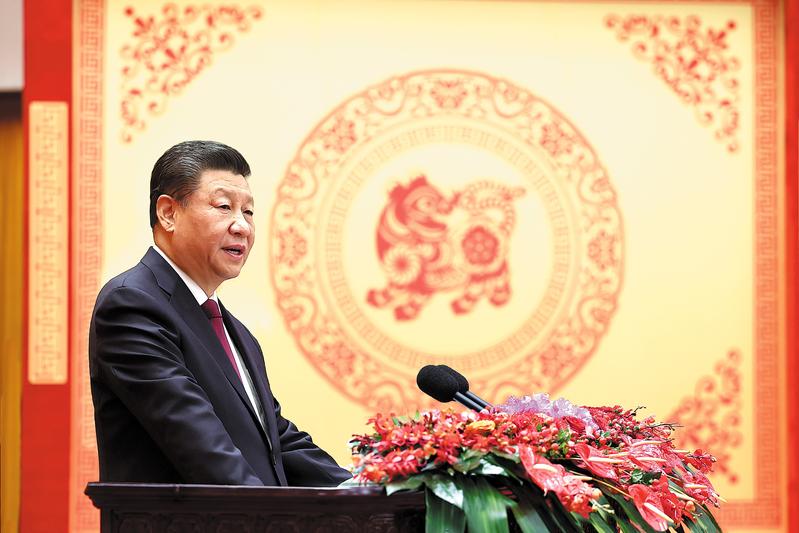 President Xi Jinping delivers a speech on Jan 30 at a gathering at the Great Hall of the People in Beijing in which he spoke of China’s achievements in the past year and extended Spring Festival greetings to all Chinese at home and abroad. (JU PENG / XINHUA)

President Xi Jinping has underscored the importance of unity of the whole nation in forging ahead toward national rejuvenation, saying that as long as 1.4 billion Chinese people work together for a shared future, China will continue to work miracles on its journey forward.

Xi, also general secretary of the Communist Party of China Central Committee and chairman of the Central Military Commission, made the remark on Jan 30 as he addressed a gathering in the Great Hall of the People in Beijing in celebration of Spring Festival, or Lunar New Year, which fell on Feb 1.

Party and State leaders and representatives from all walks of life participated in the gathering.

Xi extended festival greetings and best wishes to people of all ethnic groups throughout the country, to compatriots in the Hong Kong and Macao special administrative regions and Taiwan, and to overseas Chinese around the world.

He reviewed the country’s achievements over the past year that were made despite the many internal and external challenges amid the COVID-19 pandemic.

The president said China took the global lead in controlling the spread of the virus and securing economic growth, and that it has made more progress in building the new development paradigm and promoting high-quality growth.

He also spoke of the country’s great accomplishments in bolstering national defense, stabilizing Hong Kong and securing good governance, strengthening the fight against “Taiwan independence” forces and promoting reunification of the motherland as well as advancing major-country diplomacy with Chinese characteristics.

As the past year witnessed the centenary of the Party’s founding, Xi said the history of the Party’s struggle over the past century has demonstrated that unity is strength and united effort leads to a bright future.

“Through united effort, we have created a glorious history; and with that in mind, we can continue to open up brighter prospects,” Xi said.

With the Party uniting and leading the whole nation toward realizing the second centenary goal of building China into a modern socialist country in all respects by the middle of this century, Xi stressed that whatever changes and challenges it may face, the whole nation must bear the risks in mind and be closely united to continue to advance the great cause of national rejuvenation.

As the 20th National Congress of the CPC approaches in the second half of this year, Xi called for continued efforts to maintain a stable and healthy economic environment, a peaceful and prosperous social environment and a clean and righteous political environment.

This new year being the Year of the Tiger, a creature seen in Chinese culture as a symbol of strength, courage and boldness, Xi called for carrying on in the spirit of the tiger to continue to write a new historical chapter in the great cause of socialism with Chinese characteristics.

He reaffirmed that China will present streamlined, safe and splendid Olympic Games to the world, and he wished for the Chinese and foreign athletes to make outstanding achievements in the 2022 Beijing Winter Olympics and Paralympics.

On Jan 29, Xi also took part in an annual gathering with non-CPC members ahead of Spring Festival. On behalf of the CPC Central Committee, he extended his greetings to people from non-CPC political parties, the All-China Federation of Industry and Commerce, people without party affiliation and members of the united front.

Efforts should be made to uphold and improve the system of multiparty cooperation and political consultation under the leadership of the CPC, maintain the correct political orientation and strengthen guidance work, he said.