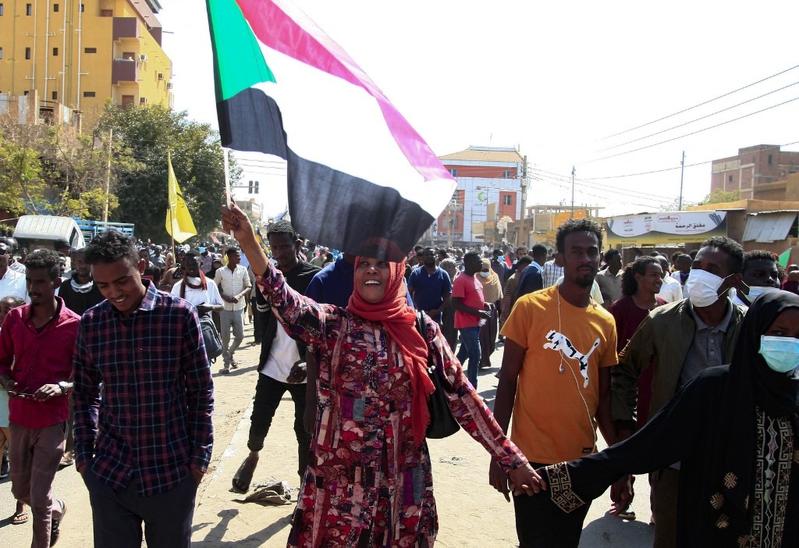 In this file photo taken on Jan 30, 2022, a Sudanese woman waves her country's national flag as she takes part in a rally to protest against last year's military coup, in the capital Khartoum. (PHOTO /AFP)

"The army is ready to conduct a dialogue regarding a transitional period if a consensus is reached," said Al-Burhan in an interview aired by Sudan TV.

"The army is ready to conduct a dialogue regarding a transitional period if a consensus is reached," said Chairman of Sudan's Transitional Sovereign Council Abdel Fattah Al-Burhan in an interview aired by Sudan TV

"Neither I nor the military establishment wants to rule Sudan. The army will leave the political arena in the event that elections are conducted or a national consensus is reached in the country," he said.

He called for a dialogue that must include all forces, except for the National Congress Party, which is the party of former President Omar al-Bashir.

"Volker is a mediator to bring all parties to sit for dialogue, but he has no right to propose an initiative. He sits with a specific group and gets influenced by their ideas," he noted.

Al-Burhan further downplayed the possibility of imposing international sanctions on him or the military establishment under the pretext of undermining the democratic transition in Sudan.

"Talking about sanctions is not feasible or useful," he said.

Sudan has been suffering a political crisis after Al-Burhan, also general commander of the Sudanese Armed Forces, declared a state of emergency on Oct 25, 2021 and dissolved the Sovereign Council and the government.