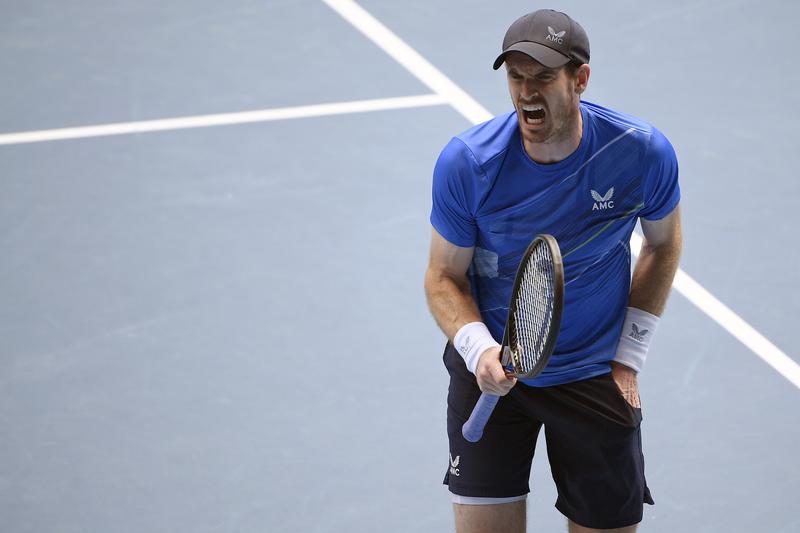 Andy Murray of Britain reacts after winning a point against Nikoloz Basilashvili of Georgia during their first round match at the Australian Open tennis championships in Melbourne, Australia, Jan 18, 2022. (ANDY BROWNBILL / AP)

MELBOURNE - Andy Murray dipped into the depth of his defensive skills to tame big-hitting Nikoloz Basilashvili during a thrilling 6-1 3-6 6-4 6-7(5) 6-4 win on Tuesday to reach the second round of the Australian Open for the first time in five years.

The former world number one, a five-time finalist at Melbourne Park, has seen his ranking plummet since hip surgery in 2019 and long injury layoffs that followed and needed a wildcard into the main draw of this year's tournament.

The 113th-ranked Andy Murray, who won the last of his three major titles at Wimbledon in 2016, showed he still had the game to trouble top players on the tour and forced the 21st seed from Georgia into making a litany of errors

The 113th-ranked Murray, who won the last of his three major titles at Wimbledon in 2016, showed he still had the game to trouble top players on the tour and forced the 21st seed from Georgia into making a litany of errors.

It was Murray's first match at Melbourne Park since a five-set defeat by Roberto Bautista Agut in 2019. He skipped the 2018 and 2020 tournaments with injury and also missed the last edition after testing positive for COVID-19 in the leadup.

"It's amazing. It's been a tough three-four years. I've put in a lot of work to get back here," Murray said in his on-court interview. "I've played on this court many times and the atmosphere is incredible. I've always had fantastic support.

"This is the one where I thought potentially I'd played my last match on three years ago but amazing to be back winning a five-set battle like that. Can't ask for anything more."

This was the third meeting between the pair with the British 34-year-old, who reached the fourth round at the Australian Open in 2017, triumphing in both previous encounters including last week's win en route to the final in Sydney.

Basilashvili, 29, committed 99 unforced errors, many of which came when the Murray ran from one end of the court to the other to defend doggedly and making his opponent play an extra shot in the rallies.

Murray often had to lean on his racquet to catch his breath for a few seconds as the match went into a deciding set but after an exchange of breaks he converted another opportunity to seal the win after almost a four-hour battle.

After Basilashvili found the net with his return on his third match-point, Murray let out a huge roar and a "let's go" as an appreciative crowd at the John Cain Arena showcourt gave him a standing ovation.

"He hits the ball huge from the back of the court," Murray said. "I had to do a lot of running today, lot of defending.

"He's not the sort of guy you want to see next to your name in the draw too often. But obviously a little bit of confidence from the win last week and I thankfully managed to get over the line today."

Murray will next meet Japanese qualifier Taro Daniel for a place in the third round at the year's first major.