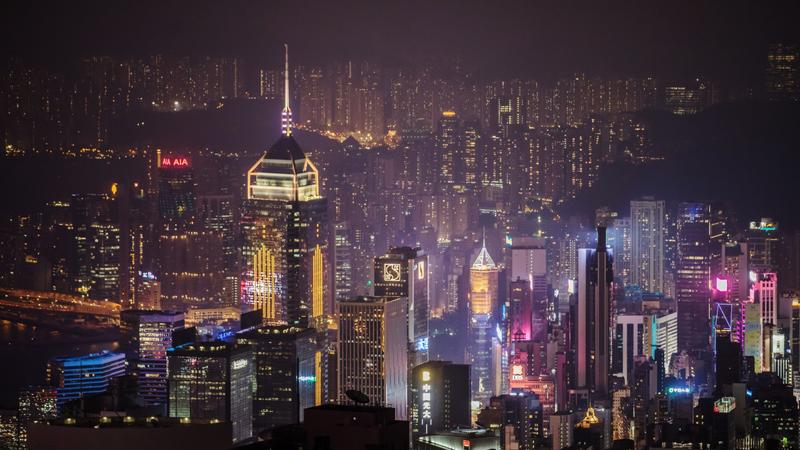 Buildings are seen from Victoria Peak at night in Hong Kong, on Aug 28, 2019. (PAUL YEUNG / BLOOMBERG)

Hong Kong is expected to deliver “a fairly robust performance” in 2022 with a 3 percent GDP growth rate, while the city’s economic growth for 2021 is forecast to be 6.7 percent on strong domestic demand, said Frederic Neumann, co-head of Asian economics research for HSBC, during a webinar on Monday.

Qu Hongbin, chief economist for Greater China at HSBC, echoed Neumann’s views. He said that Chinese mainland companies are still in the early stages of seeking IPOs in Hong Kong instead of the United States, and that the increasing number of IPOs will benefit Hong Kong’s financial businesses. Meanwhile, the accelerated integration of the Guangdong-Hong Kong-Macao Greater Bay Area will provide opportunities to Hong Kong, he said.

In the final quarter of last year China’s economy slowed down by 0.9 percent quarter-to-quarter to 4 percent, while economic growth for the whole year rose by 8.1 percent year-on-year, according to data released by the National Bureau of Statistics on Monday

Herald van der Linde, HSBC’s head of equity strategy for the Asia-Pacific, holds optimistic views on the Hong Kong equity market for 2022. Stocks of the internet and the property sectors are undervalued after last year’s crumbling, he said, adding that there is room for improvement as the central government gives it policy support.

Qu said he expects China’s GDP growth rate to recover to close to 6 percent in 2022, as the central government continues to ease property, monetary and fiscal policies, as well as regulations.

In the final quarter of last year China’s economy slowed down by 0.9 percent quarter-to-quarter to 4 percent, while economic growth for the whole year rose by 8.1 percent year-on-year, according to data released by the National Bureau of Statistics on Monday.

“We already see some policies easing, but property investment is still slowing (down), which means that in order to provide a floor to the property downturn, more needs to be done in terms of selective easing,” Qu said.

China’s property investments in 2021 rose 4.4 percent year-on-year, slowing from a 6 percent gain in the first 11 months of the year. Home sales declined 19.6 percent by value in December from a year earlier, said the National Bureau of Statistics.

“The People’s Bank of China is expected to continue to cut the reserve requirement ratio by 100 basis points in the first half of year, and increase the relending rate in order to increase total social financing by at least one percentage point,” he said.

To maintain adequate liquidity in the banking system, the PBOC on Monday said it was lowering the interest rate on 700 billion yuan ($110.2 billion) worth of one-year medium-term lending facility loans to some financial institutions.

However, Qu warns the downside risks affecting economic recovery – the spread of the highly transmissible omicron variant and the fragile global supply chain – may negatively affect the country’s exports.