By Karl Wilson in Sydney, Arunava Das in Kolkata, India and Xu Weiwei in Hong Kong 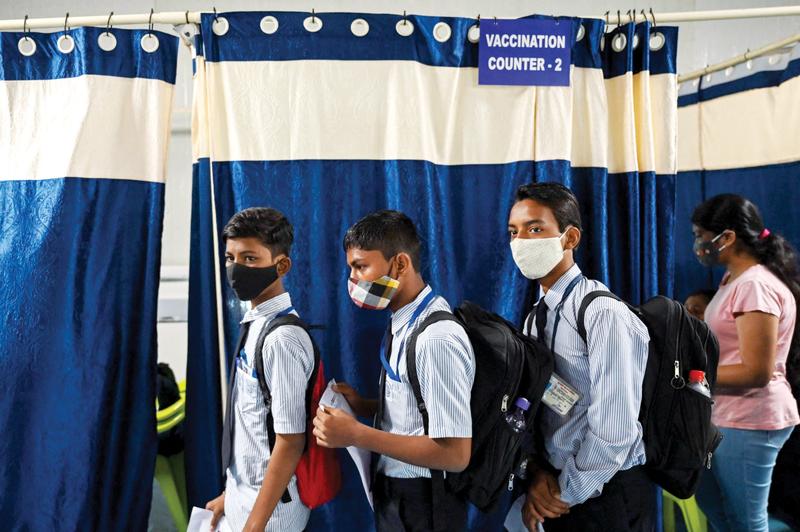 Students line up to receive a COVID-19 vaccine at a center in Mumbai on Jan 8. Indian authorities have begun vaccinating teenagers aged from 15. (PUNIT PARANJPE / AFP)

Not all that long ago it seemed a number of Asia-Pacific countries had COVID-19 under control, including the Delta variant of the virus, and people and businesses could afford to relax. Then Omicron came, and suddenly everything changed.

Raina MacIntyre, a professor of global biosecurity at the University of New South Wales, said Australia has swung from one extreme to the other in pandemic control.

In recent months the country began easing some of the world’s toughest restrictions. But by last week, its daily new cases kept breaking records, surpassing 100,000 on Jan 8, with lawmakers under pressure to close widening supply chain gaps. New South Wales and Victoria, the two most populous states, recorded their highest numbers of daily COVID-19 deaths on Jan 8.

On Jan 10, the nation’s COVID infections passed the 1 million mark, according to a Reuters tally.

“Instead of rushing to expand capacity, state and federal governments restricted access to testing by narrowing the definitions of who is eligible for a test and of what a close contact is,” MacIntyre said.

She noted that authorities had pivoted to a strategy of using rapid antigen tests. “The net effect of inaccessible, restricted and expensive testing combined with vastly reduced contact-tracing has toppled two pillars of epidemic control: test and trace,” the academic said.

Jaya Dantas, professor of international health at Curtin University in Western Australia, said “we need to be especially vigilant” during the Omicron outbreak.

“While ICU presentations and patients on ventilators are not as high as (for) the Delta variant, its high transmissibility means we have seen its impacts felt across sectors,” Dantas said.

Omicron is also beginning to cut a swathe through South Asia, prompting Indian experts to say that a third wave of COVID-19 has arrived in the country and prompting several state governments to impose fresh restrictions.

With the surge in new cases, India’s COVID-19 tally topped 36 million on Jan 11, according to official data released the following day.

Dhrubajyoti Chattopadhyay, a molecular virologist and vice-chancellor of the Sister Nivedita University in Kolkata, predicts an explosion in infections in the coming few weeks.

However, Chattopadhyay notes that the new strain appears to be less severe than earlier variants.

In Mumbai, 87 percent of those newly infected show no symptoms.

Tanmay Mahapatra, an epidemiologist with the nongovernmental organization CARE India, also sees grounds for guarded optimism. “The trend that Omicron is gradually becoming the predominant variant over Delta in many places may turn out to be a blessing,” Mahapatra said.

Nevertheless, alarm bells over Omicron are ringing in neighboring Bangladesh and Pakistan, as well as in Indonesia and the Philippines.

Bangladesh, which last week reported its highest number of COVID-19 infections in almost three months, plans to administer 40 million doses of a COVID-19 vaccine this month and in each of the following months.

The United Nations Children’s Fund said on Dec 30 that it has delivered over 100 million doses of COVID-19 vaccines to Bangladesh from World Health Organization-approved manufacturers since June.

The threshold was passed after Bangladesh received a shipment of 20.46 million doses of vaccines from China on Dec 29, part of a cost-sharing agreement between the Bangladeshi government, the Asian Development Bank and UNICEF.

Arunava Das is a freelance journalist for China Daily.