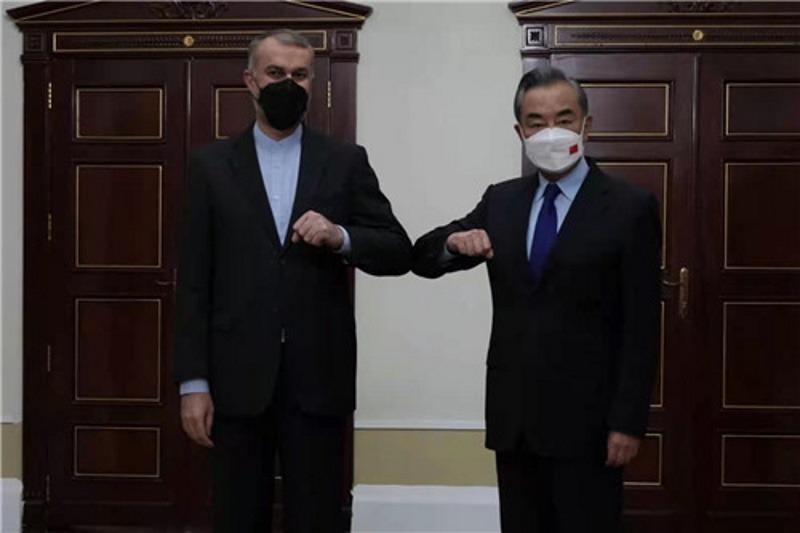 The two sides announced the launch of the implementation of a comprehensive cooperation plan.

Wang said China is ready to work with Iran to implement the important consensus reached by the two heads of state, strengthen communication and coordinate actions, constantly enrich the connotation of China-Iran comprehensive strategic partnership and open a new era for the development of bilateral ties for the next 50 years.

Abdollahian, on behalf of Iranian President Ebrahim Raisi, said that Iran firmly supports China in safeguarding its core interests and firmly adheres to the one-China policy.

Iran highly appreciates and will actively participate in the joint building of the Belt and Road, said Abdollahian, adding that developing relations with China is Iran's top decision. The Iranian side is firmly committed to advancing Iran-China cooperation and staunchly supports the Beijing Winter Olympics.

The two sides jointly announced the launch of the implementation of the 25-year comprehensive cooperation plan and conducted in-depth discussions. Both sides agreed to step up cooperation on energy, infrastructure, production capacity, science and technology, and medical and health care.

Wang Yi said the US unilateral withdrawal from the nuclear deal has directly created the current difficult situation. The US should bear the major responsibility and rectify its mistake as soon as possible

They also agreed to expand cooperation in agriculture, fisheries and cyber security as well as promote tripartite cooperation, and deepen people-to-people and cultural exchanges in education, film and personnel training.

Wang said that the right and wrong of the Iranian nuclear issue is clear. The US unilateral withdrawal from the Joint Comprehensive Plan of Action has directly created the current difficult situation. The United States should bear the major responsibility and rectify its mistake as soon as possible.

China will firmly support the resumption of negotiations on the implementation of the JCPOA and will continue to participate constructively in follow-up negotiations, he said.

It is hoped that all parties will overcome difficulties and meet each other halfway to advance the political and diplomatic settlement process, Wang said.

Lauding the constructive role played by the Chinese side, Abdollahian said Iran is committed to reaching a set of stable guarantee agreements through serious negotiations and is willing to maintain close communication with China.