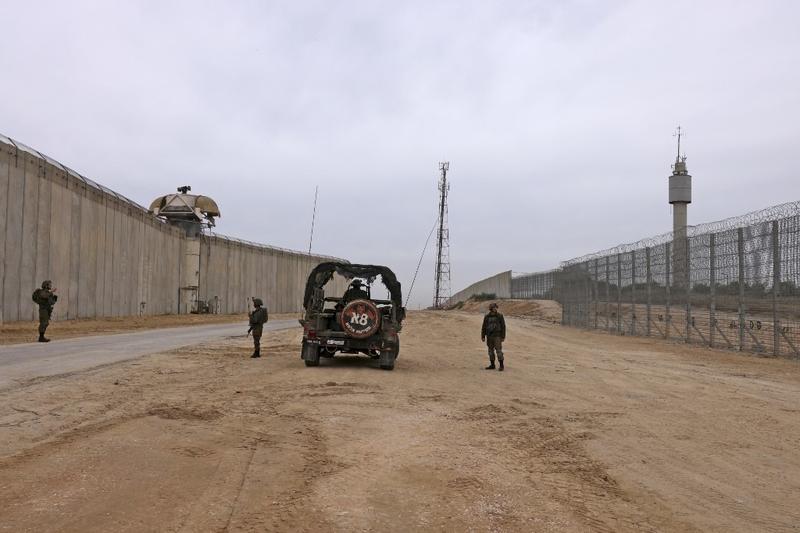 Israeli soldiers stand on guard by the fence along the border with the Gaza Strip near Moshav Netiv HaAsara in southern Israel on Dec 7, 2021. (MENAHEM KAHANA / AFP)

JERUSALEM - An Israeli was wounded in a shooting attack on the Gaza border on Wednesday, the military said, after a rare visit to Israel by Palestinian President Mahmoud Abbas drew condemnation from the enclave's Hamas rulers.

Israel's Defence Minister Benny Gantz hosted Abbas in his home late on Tuesday, the Western-backed Palestinian leader's first such visit to Israel in more than a decade, although it signaled few prospects for any resumption of long-stalled peace negotiations.

In Gaza, Hazem Qassem, a Hamas spokesman, said that by meeting Gantz, Abbas was "deepening Palestinian political divisions" and encouraging accommodation with "the occupation", a term the Islamist militant group uses to describe Israel

Following their talks, the Israeli Defence Ministry announced a series of what it described as "confidence-building measures" that would ease the entry of hundreds of Palestinian business people to Israel.

In Gaza, Hazem Qassem, a Hamas spokesman, said that by meeting Gantz, Abbas was "deepening Palestinian political divisions" and encouraging accommodation with "the occupation", a term the Islamist militant group uses to describe Israel.

There was no immediate claim of responsibility for the shooting attack from Gaza, which the Israeli military said slightly wounded the civilian. The border has been largely quiet since an 11-day war between Israel and Gaza militants in May.

Fong added that the Health Ministry is now preparing hospitals for any likely surge in COVID-19 cases.

While health facilities are being prepared, he also stressed that the possibility of reintroducing earlier curfews, placing more restrictions on gatherings, and escalating further their masking mandates is always under consideration.

Fong urged the Fijians to get vaccinated to ensure they are protected against the deadly disease.

Currently, a total of 91.9 percent of the adult target population in Fiji have been fully vaccinated while 97.7 percent have received one dose of COVID-19 vaccines.