Russia's Daniil Medvedev returns the ball to Germany's Jan-Lennard Struff during the men's singles semi-final tennis match between Russia and Germany of the Davis Cup tennis tournament at the Madrid arena in Madrid on Dec 4, 2021. (PIERRE-PHILIPPE MARCOU / AFP)

The Russian Tennis Federation will play Croatia in the Davis Cup final after beating Germany 2-1 in the semi-finals on Saturday in Madrid.

US Open champion Daniil Medvedev comfortably beat Jan-Lennard Struff 6-4 6-4 to give his team an unassailable 2-0 lead before Germany won the doubles to restore some pride on their exit from the competition.

Medvedev's win, after Andrey Rublev had demolished Dominik Koepfer 6-4 6-0, set up a meeting with the 2018 champions Croatia on Sunday.

World number two Medvedev never looked in serious trouble against Struff, making just six unforced errors and saving the one break point he faced to seal the win in 66 minutes and send Russia to their first Davis Cup final since 2007.

"I am really happy for the team to be in the final," Medvedev said in an on-court interview.

"It has been an amazing week. It won't be easy (against Croatia). They have the best doubles team in the world, we need to try to close it out in singles, but we believe in our guys in doubles."

Earlier, Rublev smashed down six aces in the first set and world number 58 Koepfer wilted remarkably as the Russian broke at every opportunity in the second to wrap up the opening match in 49 minutes.

Rublev's ruthless performance was a marked improvement from his quarter-final match against Sweden's Elias Ymer when he won the first set but missed several break point opportunities in the second and was taken to a decider.

"The difference today was compared to other matches (where) I was feeling I'm winning quite easy, I don't need to (put in) much effort, and in the end I was completely relaxed. I was giving up to the other guy," he told a news conference.

"Then they start to play better, start to shoot better. Then I was losing or winning in three sets.

"The difference today was since the beginning, I was pumped, (focused) more on winning, to play as better as I can, to not give any hope." 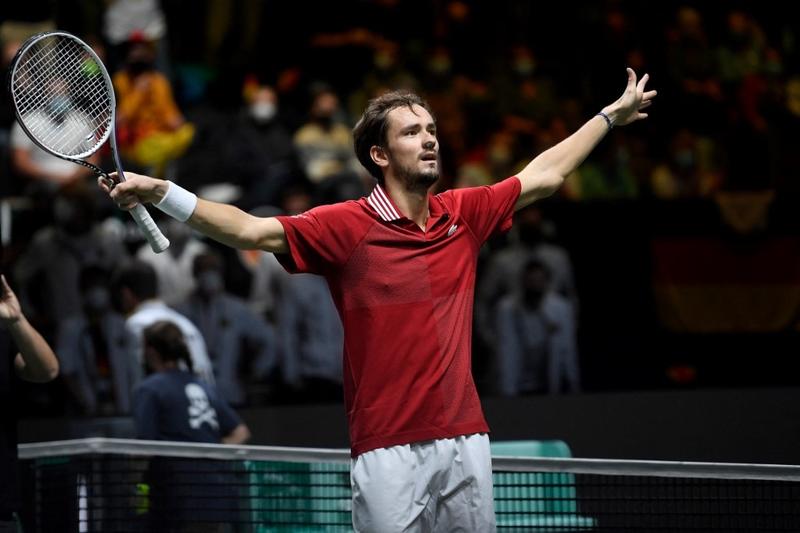 Russia's Daniil Medvedev celebrates at the end of the men's singles semi-final tennis match between Russia and Germany of the Davis Cup tennis tournament at the Madrid arena in Madrid on Dec 4, 2021. (PIERRE-PHILIPPE MARCOU / AFP)

In the doubles, the Russians replaced Rublev with Karen Khachanov for his first appearance in the tournament, to play alongside Aslan Karatsev against Kevin Krawietz and Tim Puetz.

Khachanov and Karatsev got off to a great start, too, winning the first set 6-4, but failed to convert two break points in the second as the German duo recovered to level the match.

Krawietz and Puetz then continued their unbeaten run at the finals to win the final set 6-3.

On Sunday, the Russians will face a Croatia side who are in high spirits after overcoming a Novak Djokovic-led Serbia on Friday.