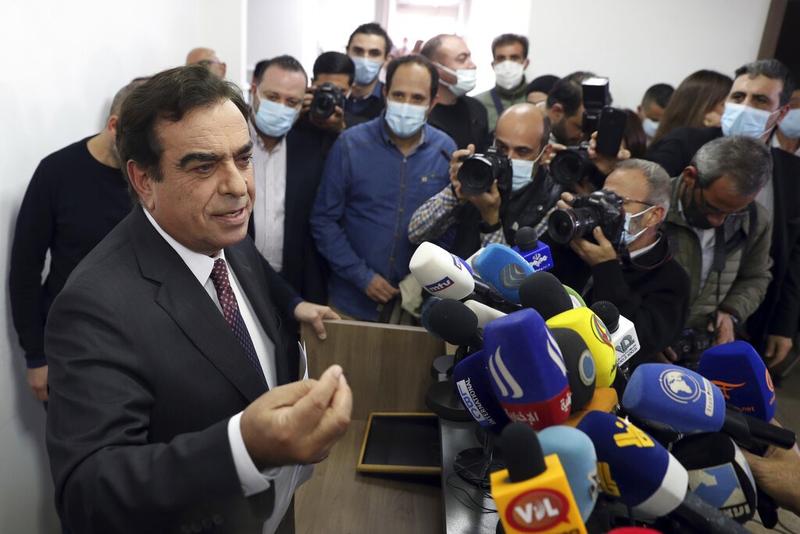 Lebanon's Information Minister George Kordahi speaks during a press conference to announce his resignation at the Ministry of Information in Beirut, Lebanon, Dec 3, 2021. (BILAL HUSSEIN / AP)

BEIRUT - Lebanon's information minister resigned on Friday saying he was putting the nation before his personal interest to help end a diplomatic spat with Saudi Arabia sparked by his comments.

George Kordahi said he had quit before the French president visited Riyadh in the hope Emmanuel Macron would help ease the crisis sparked by the Lebanese TV host-turned-politican's critical remarks about Saudi Arabia's role in the Yemen war.

Saudi Arabia expelled Lebanon's envoy to the kingdom, recalled its ambassador to Beirut and banned Lebanese imports after Kordahi's comments which Riyadh said were a symptom of the wider issue of Iran-backed Hezbollah's grip on Lebanon

Saudi Arabia expelled Lebanon's envoy to the kingdom, recalled its ambassador to Beirut and banned Lebanese imports after Kordahi's comments which Riyadh said were a symptom of the wider issue of Iran-backed Hezbollah's grip on Lebanon.

Sunni Muslim Saudi Arabia and Shi'ite Iran have long battled for influence in the region, including in Lebanon, which is struggling with a deep economic crisis and desperately needs financial support from regional and international donors.

Other Gulf states, including the United Arab Emirates, Bahrain and Kuwait, followed Saudi Arabia's lead with similar measures against Lebanon.

Kordahi, a Christian whose Marada party is backed by Hezbollah, had refused to resign in the weeks afterwards even as Prime Minister Najib Mikati asked him to put "national interest" first.

"I understood from Mikati ... that the French want my resignation to take place ahead of his (Macron's) visit," Kordahi told a news conference, saying he believed Mikati had assurances that Macron would discuss Lebanon's ties with Riyadh.

"I refuse to be used as a reason to harm Lebanon and my fellow Lebanese in Saudi Arabia and other Gulf countries," he said, adding he wanted to prevent any punitive action against the hundreds of thousands of Lebanese living in Gulf Arab states.

Karim Emile Bitar, head of the political science institute at Saint Joseph University of Beirut, said Kordahi's resignation was more of a catalyst than cause for the Saudi measures, which he said were unlikely to be lifted swiftly as they were driven by the ongoing regional tussle between Tehran and Riyadh.

"The whole Kordahi affair was a sideshow that showed once again that Lebanon is not a sovereign country and is paying the price of the Saudi-Iranian proxy war," he said.