By Alexis Hooi and Zhao Ruixue in Yantai, Shandong

A staff member (right) and a student from the Food and Wine College of Ningxia University taste wine at a chateau located in the eastern foothills of Helan Mountains in the Ningxia Hui autonomous region in July. Taking advantage of the job opportunities in the area, the college has provided skilled viniculture graduates for wineries in recent years. (YANG ZHISEN / XINHUA)

Editor's note: Implementation of the China-EU Geographical Indications Agreement is expected to expand the reach of quality products from both sides. This series looks at goods poised to tap into East-West markets.

On a hilly expanse of farmland near the coast of East China's Shandong province, Wan Qiuhua has earned enough from her crops to buy her only son an apartment and car, giving him the opportunity to get married and live a comfortable life.

Most farmers in the area believe the land at Zhuqiao township, Yantai, is not fertile enough to support common crops. But Wan has been growing one crop perfectly suited to the local conditions－grapes.

"This year we made 100,000 yuan ($15,660) from planting wine grapes," said Wan, 53, adding that the income is much higher than that from the corn, wheat and peanuts they farmed a decade ago. "We could hardly make ends meet from the hilly terrain before, but our life is getting better now," she said.

Wan and her husband have been working a 10-hectare plot since 2013. They are one of 30 farming families who have entered into a land management arrangement with Changyu Wine Group, China's leading wine producer, to grow grapes.

"The hills may be unsuitable for most crops, but they're good for wine grapes," said Yang Yachao, an experienced Changyu winemaker who graduated from the College of Oenology at Northwest Agriculture and Forestry University.

In 2012, Yang helped lead the development of Zhuqiao's major grape cultivation base, which provides jobs for 600 rural residents who earn 10,000 yuan a year each from the work. 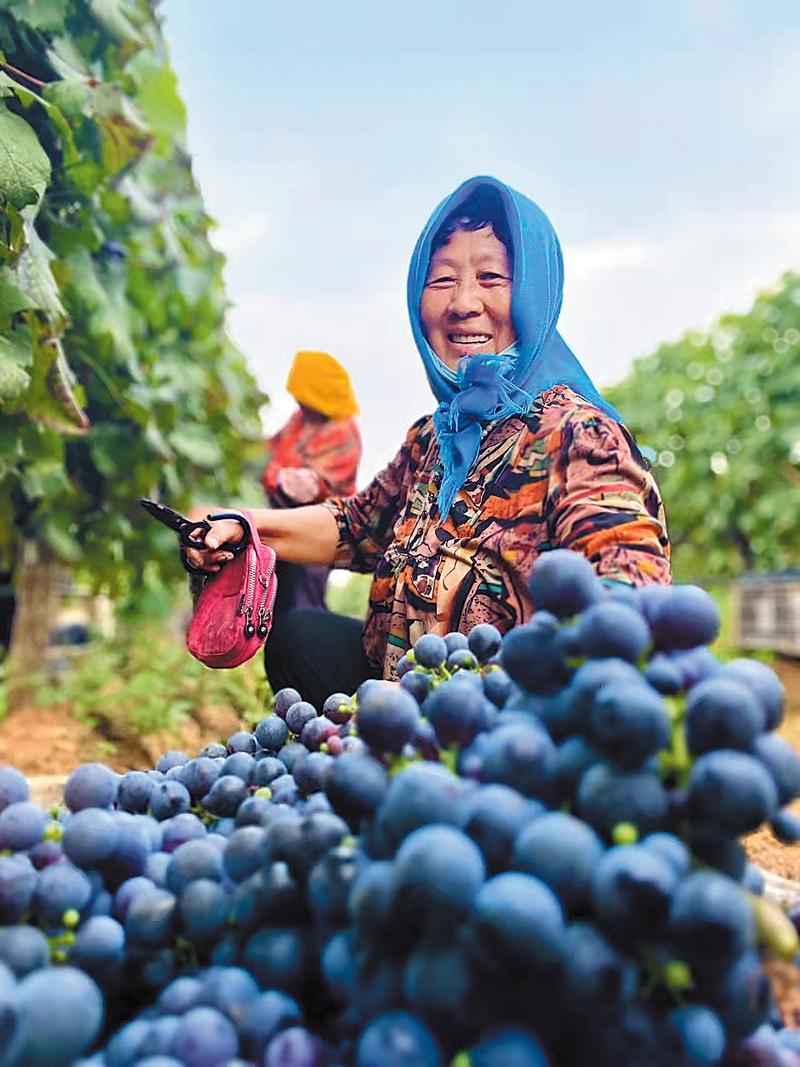 Yang also conducts regular training sessions for the farmers with his colleagues. "We teach them standard cultivation techniques and train them in the details of vine growth throughout its various stages to guarantee the highest grape quality," he said.

Yantai is the birthplace and hub of modern Chinese winemaking. Changyu began in 1892, when overseas Chinese industrialist Zhang Bishi invested in the latest viniculture technology to tap the area's climatic and geographical advantages. The area has annual sunshine of more than 2,600 hours, yearly rainfall of 525 millimeters, a mean annual temperature of 13 C and soil with high gravel content. The ocean breezes that blow over the hills also aid the production of coveted coastal wines.

The city has grown to have a winemaking area of 19,000 hectares, which involves at least 203 major companies. There are 12 leading winemakers, and last year they produced a combined 71,300 kiloliters of wine－nearly one-fifth of the nation's wine production. The leading winemakers reaped about 1.95 billion yuan last year, and 10 business groups in the wine-related sector have annual sales revenue exceeding 100 million yuan each, according to Yantai's statistics bureau.

The city also has more than 500 wine-related businesses, ranging from agricultural machinery companies to bottle-makers and cultural tourism operators. Its wines have won more than 500 industry awards worldwide, and Yantai wines last year had a calculated brand value of 85.2 billion yuan, the bureau said.

Gao Jingtao, head of the Yantai vine and wine bureau, said the city has a pioneering approach and has issued guidelines to further promote the wine industry's healthy and stable development. "We want to fully realize our position as a global wine production base," he said.

Yantai wines are set to fill even more glasses at home and abroad, following their inclusion on the list of China's 100 geographical indications under protection in the European Union. An indication is a label for products that have a specific geographical origin with qualities or a reputation that are due to that origin, according to the World Intellectual Property Organization. 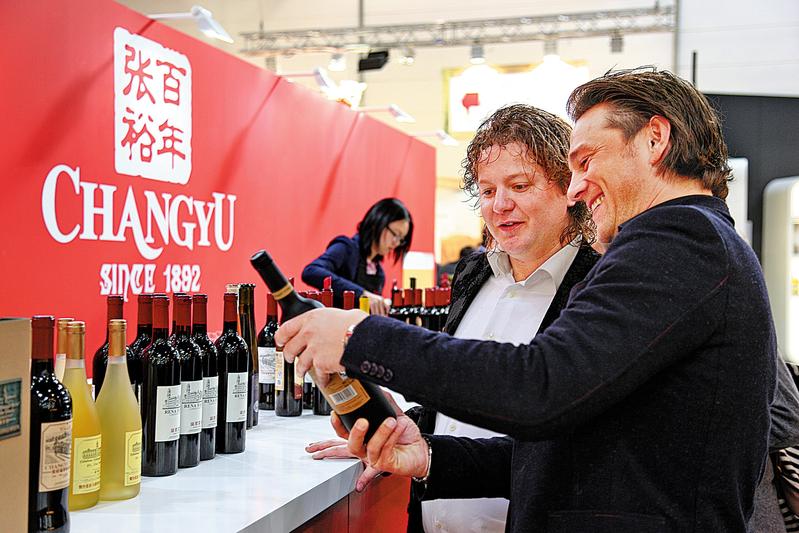 Visitors to the global ProWein show in Dusseldorf, Germany, in 2016, examine products from the Changyu Wine Group. (WU XIAOXIA / FOR CHINA DAILY)

Similar wine products from the east of the Helan Mountains in Northwest China's Ningxia Hui autonomous region and Shacheng, a town in Huailai county in North China's Hebei province have also attained the geographical indication, amid the growing global recognition of quality Chinese agricultural products.

Ningxia has 211 wineries with a combined area of more than 36,600 hectares for grape cultivation. The region produces 130 million bottles of wine annually. In 2020, Ningxia wine exports were up by more than 46 percent year-on-year despite disruptions caused by COVID-19, according to the latest industry figures.

In addition to its three major vineyards and wineries in Yantai, Changyu has bases in Ningxia, the Xinjiang Uygur autonomous region, Beijing, and Liaoning and Shaanxi provinces that cover more than 13,300 hectares.

The winemaker, one of Asia's largest, reported revenue of 3.4 billion yuan last year and has overseas interests in countries including Spain, Chile and Australia.

Changyu's award-winning Longyu label, which produces wine in the eastern foothills of Ningxia's Helan Mountain, is exported to 44 countries and regions, with nearly half of the sales to Europe, according to the company.

Changyu general manager Sun Jian said all these factors have helped put the company at the forefront of the global industry and allowed it to tap the potential of expanding markets and ride a wave of savvy young Chinese consumers.

"Our quality continues to improve and we must build on our local strengths. We certainly need to nurture our consumers and provide them with good choices, especially amid strong competition from imported wines," he said.

Whether it is new products, smaller packaging, mixed beverages or e-commerce platforms to meet market digitalization trends, business innovation will be integral in getting a bigger slice of what is still a very large pie, Sun said.

Chinese wines are also receiving wider recognition from European consumers, said Li, who is a member of several international wine evaluation panels, including the International Organization of Vine and Wine. "Given wine's history, production and market in Europe, that's certainly not easy," he said. 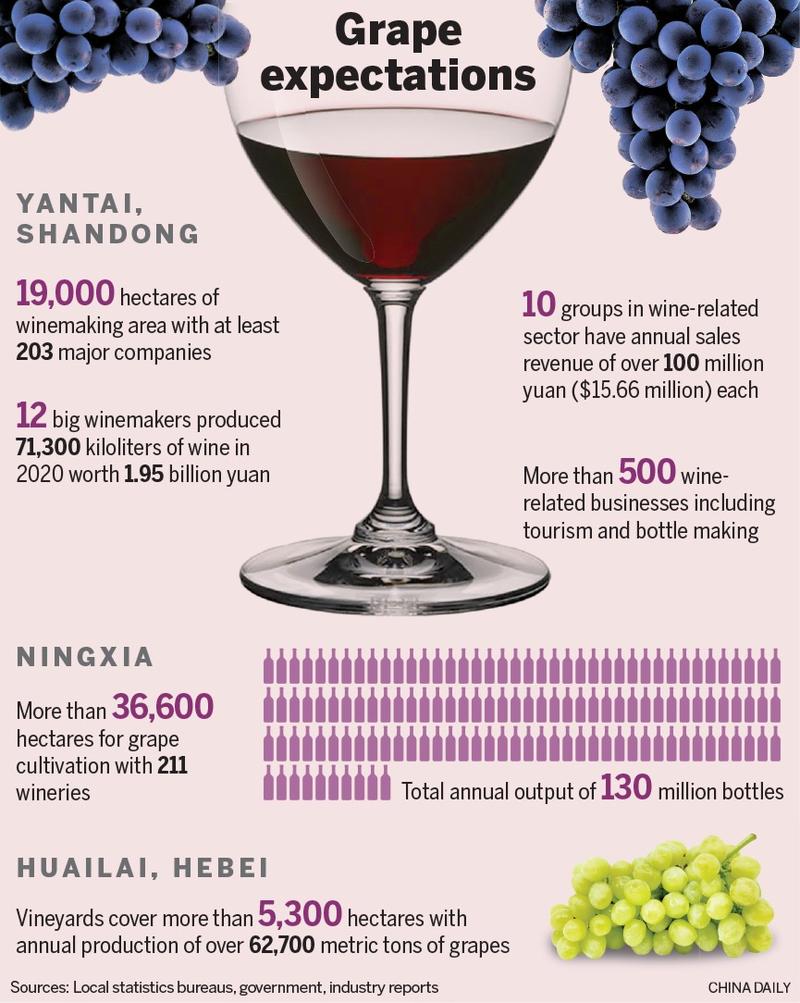 Yantai's enological advantages are obvious in the scenic Penglai area－known as the "habitat of immortals "since ancient times－where vineyards and wineries, large and small, dot the coastal hills.

Renowned French winemaker Domaines Barons de Rothschild (Lafite) chose to establish its first Chinese estate Domaine de Long Dai there, with 4 hectares of vineyards spreading across 420 terraces. The vines were planted a decade ago in the granitic soils of the Qiushan valley foothills. The French group works with farmers and villagers who help produce about 2,500 cases of its Long Dai wines annually.

Long Dai's technical manager Denise Cosentino said the vineyard is committed to producing the best quality grapes based on the local conditions.

"The top advantage of Penglai is surely its position," she said. "What we are trying to do in Long Dai is let the grapes express the place where they are growing. We are able to produce wines that are very elegant and balanced with finesse."

Liu Layu, chief winemaker of the up-and-coming Longting Vineyard, said Penglai boasts an "industry ecosystem" of top experts and an environment that allows stakeholders to improve and innovate.

"Many fruit farmers have rich experience in apple cultivation here, so the agricultural expertise helps when we guide and manage local staff in growing our grapes," he said, adding that local government support of the sector, including subsidies in the crucial first few years of vineyards, is also important.

Longting occupies 68 hectares, with half of the estate dedicated to vines producing 50,000 bottles of high-end wines a year. Its cellar, which uses state-of-the-art equipment and proved winemaking techniques, covers 3,700 square meters, with another 4,000 sq m for guest rooms and dining.

Its lauded wines include a delicate chardonnay created by precise production methods that reflects the beauty of the area, Liu said. "We prefer to focus on quality, not quantity, to let nature take its course in our wines," he said.

At the neighboring Chateau Anuo, annual production of about 60,000 bottles is geared toward a growing number of domestic, urbane clients who favor its range of boutique wines that have won international awards.

The vineyard covers more than 80 hectares and leverages the microclimate of the Qiushan valley in the southern part of Penglai. "It's been seven years since we planted our first grapes. This is a competitive sector that requires heavy investment and commitment, but we're seeing healthy returns," he said, adding that "experiential travel and cultural tourism" are also set to expand here.

Penglai's winemakers are behind the impressive progress Yantai has made to become the industry leader, the city's vine and wine bureau chief Gao Jingtao said.

"Chinese winemaking here is deeply valued. Its economic strengths and industry expertise are tied to inimitable historical aspects and cultural roles, altogether offering what can be an 'Asian wine' to the world," Gao said.