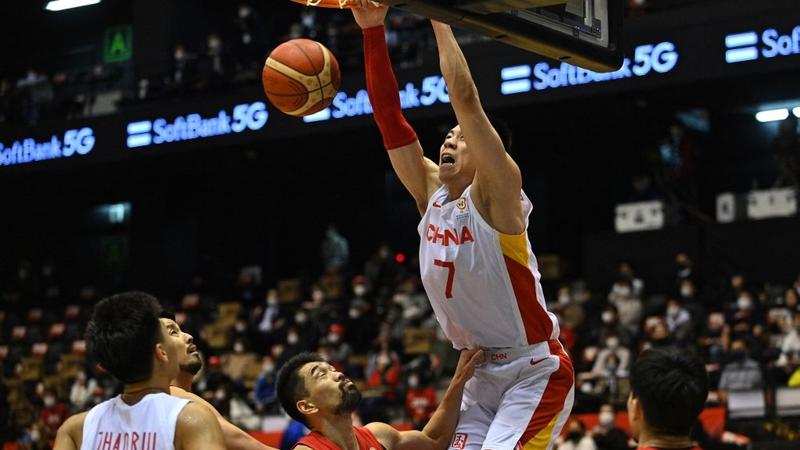 China's Zhang Zhenlin makes a dunk during the FIBA Basketball World Cup 2023 Asian Qualifiers match between Japan and China at the Xebio Arena in Sendai on Nov 28, 2021. (PHILIP FONG / AFP)

SENDAI, Japan - China routed Japan 106-73 to clinch its second victory in as many days over its FIBA World Cup qualifying Group B rivals here on Sunday.

Zhou Qi, the top scorer in China's 79-63 victory on Saturday, was the only Chinese player to stay on the bench for the whole 40 minutes. The 2.16-meter center, who plays for South East Melbourne Phoenix in Australia's NBL, limped off the court after sustaining a right ankle injury.

Zhou Qi, the top scorer in China's 79-63 victory on Saturday, was the only Chinese player to stay on the bench for the whole 40 minutes

"The players showed great fighting spirit during the match," said China head coach Du Feng. "I warned them after the first win yesterday that they need to make 200 percent effort to win this match."

Du, who took over as head coach two years ago, said that he left Zhou on the bench to avoid any risk.

"Zhou Qi flew all the way from Australia to play for the national team. I feel very thankful for his efforts."

China raced into an 8-0 lead soon after the start of the match and the Japanese side, managed by Japan's former women's national team coach Tom Hovasse, found it difficult to break the watertight Chinese defense, scoring only 10 points in the first quarter.

China made 14 three-pointers during the match and with two minutes left, Guo made a lay-up to extend his side's advantage to 101-65, marking a rare achievement for China to score over 100 points in a game.

"There are only a few times in many years that China has scored over 100," Du said.

As the co-host of the 2023 FIBA World Cup, Japan has automatically qualified for the tournament. Three of Japan's key players, including Washington Wizards forward Rui Hachimura, were not called up to play the two matches.

"I am aware that some of Japan's first-choice players did not play. Could we still beat Japan by such a big margin if they were here? I don't know. But I look forward to playing the full-strength Japanese team in the future," Du noted.