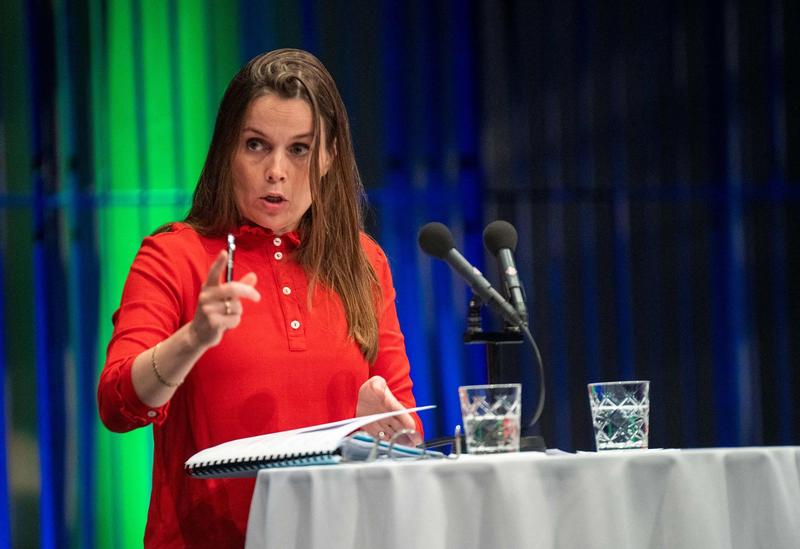 Iceland’s governing coalition, which spans the entire political spectrum, settled on ruling together for a second consecutive term after tough talks including on energy and climate issues.

The volcanic island nation will be led by Katrin Jakobsdottir, 45, who will oversee a tourism-dependent economy bouncing back from the pandemic. The agreement, announced in Reykjavik on Sunday, brings to a close weeks of negotiations following September’s general election.

Coming up with ways to mitigate and adapt to climate change will be one of the government’s top policy areas. The Arctic nation is among the world’s most exposed to extreme weather events, and home to glaciers melting from global warming

Coming up with ways to mitigate and adapt to climate change will be one of the government’s top policy areas. The Arctic nation is among the world’s most exposed to extreme weather events, and home to glaciers melting from global warming.

The new government decided to stop granting oil exploration licenses around Iceland and upgraded its climate target to a 55 percent reduction in greenhouse-gas emissions by 2030, compared with 2005. It already aimed for carbon neutrality by 2040 and had joined the European Union and Norway in seeking an overall 55 percent reduction of greenhouse gases by 2030 from the 1990 level, where its share would likely have implied a cut of around 40 percent.

“We believe this goal is both ambitious and realistic,” Jakobsdottir said in an interview. Climate issues “underlie everything we are doing” and “we will have actions ready to tackle this.”

Some local environmental organizations have been calling on the government to act faster.

“Iceland is not showing any leader qualities when it comes to climate issues,” said Tinna Hallgrimsdottir, chairperson of Young Environmentalists. To get there, the government needs to hike carbon taxes, speed up the energy transition for transport, fisheries and aviation, and rethink agricultural subsidies, she said in an interview.

Iceland’s volcanic ground, with geysers spewing hot water meters into the air, provides ample geothermal energy, and the island also uses carbon-neutral hydropower to generate electricity and heat. The country is also working on nascent technologies, such as capturing carbon from the air and burying it into the ground, and it is second only to Norway in the rate of electric car ownership.

But even with that backdrop, Iceland has a steep climb ahead to reach its targets, with emissions among the highest in Europe on a per-capita basis. The land of fire and ice has fallen behind in areas such as waste management and landfill use. It generates a lot of transport emissions as people travel long distances across the vast expanse of the country that’s the most sparsely populated in Europe. Iceland will also need to figure out how to transition its proportionately large fishing fleet to cleaner energy.

The Iceland government said it will “emphasize green jobs” and struck a compromise on forming a highland national park, which it wasn’t able to agree on under its previous term.

Iceland will establish a new Infrastructure Ministry, bringing the number of ministries to 12 from 11. The government agreed to assess income from and quotas within its fisheries management system, which has been a matter of dispute and dissatisfaction for decades.