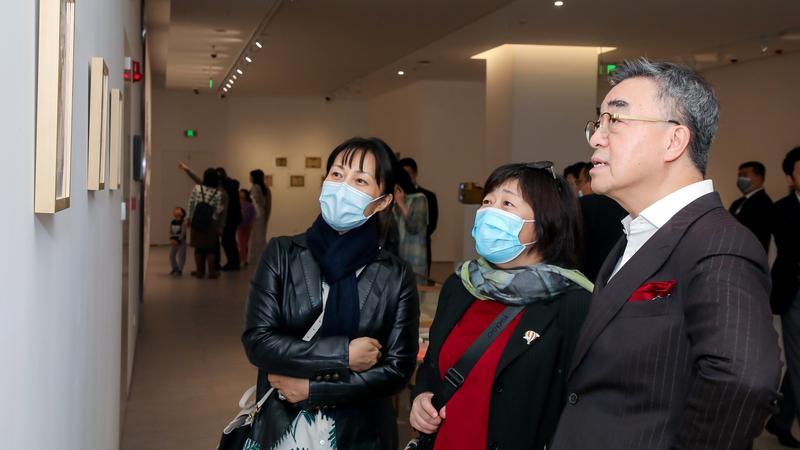 A new exhibition in Shanghai is showing teaching material, sketches and draft paintings by the late artist Chen Yifei that reveal the early years of one of the most important artists in contemporary China.

The exhibition, which opened on Nov 20 and will run through Feb 20 at the Jinchen YFM Art Gallery in the city's Minhang district, features documents from the early 1960s to the late 1970s that recount the formative years of Chen (1946-2005). The exhibition is showcasing his palettes and brushes, hand-written diaries and filmmaking.

A few of his best-known creations during that period, such as The Takeover of the President's Residence, which was created with colleague Wei Jingshan in 1977, are shown in their replica forms as the original paintings are currently key pieces in permanent exhibitions in the country.

"We have presented several of Chen Yifei's renowned creations from the 1960s and '70s alongside drafts, sketches, journals and other documents about his creative process, to provide insights into the development of his methodology of storytelling through painting," says Chen Yiming, executive director of the gallery, and younger brother of Chen Yifei.

Chen Yiming is himself a successful oil painter.

"We will find that Western classical art and impressionism techniques in composition and treatment of colors and light were absorbed and adopted by Chen Yifei in painting Chinese subjects, alongside the Soviet-style socialistic realism. He was constantly in dialogue with masters of the past, and always looking for new breakthroughs." 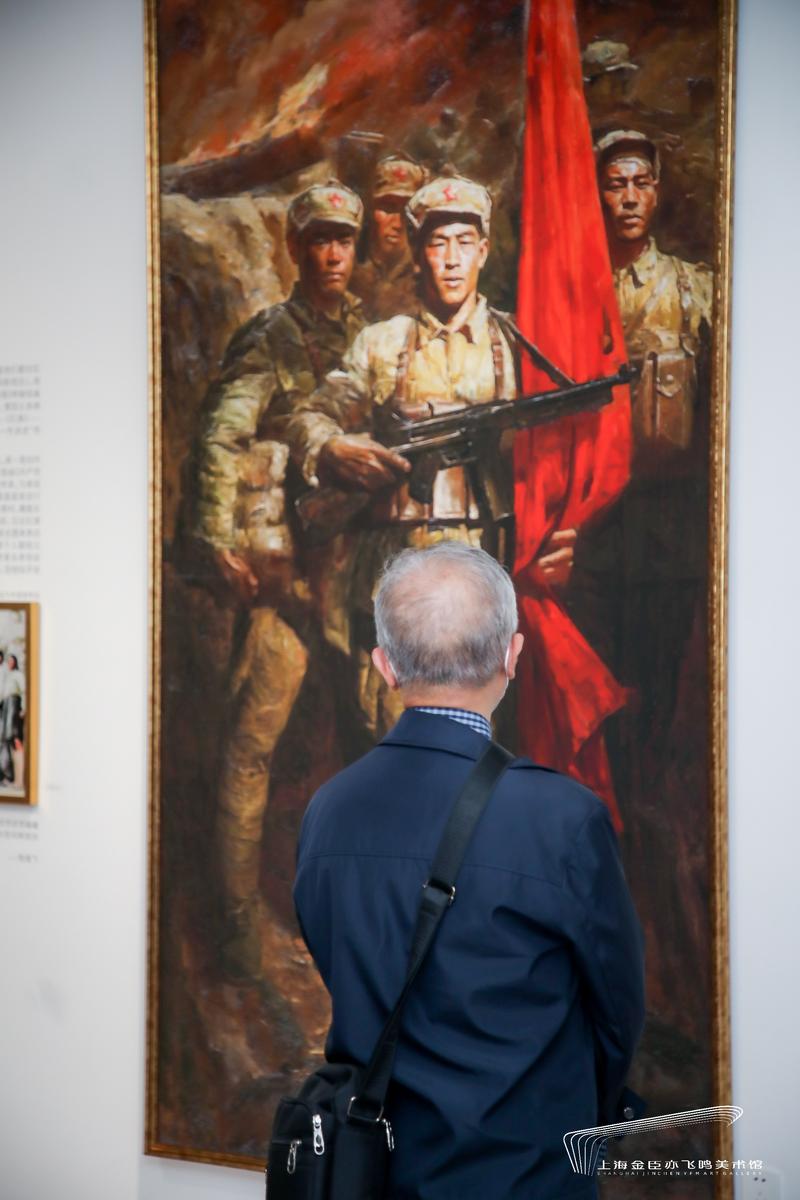 A visitor views a painting by late artist Chen Yifei at the Shanghai exhibition. (PHOTO PROVIDED TO CHINA DAILY)

The image of a javelin thrower speaks the loudest of his brother's desire to break through into new frontiers in contemporary Chinese art, Chen Yiming says.

Chen Yifei achieved national recognition at a young age with his large-scale revolution-themed paintings. In 1980, he moved to the United States to study art and became one of the first Chinese artists to achieve international success. In the 1990s, he returned to Shanghai and became an entrepreneur, creating fashion brands, art magazines and even helped to set up one of China's first model agencies. Later he developed a passion for filmmaking and was shooting his second feature film, titled The Barber, in 2005 when he suddenly fell ill and died.

According to Zhuang Zexi, executive curator of the exhibition, one of Chen Yifei's most notable contributions is his demonstration of sketch skills in a class given by Meng Guang of the Shanghai Institute of Fine Arts in a documentary made by the Shanghai Film Studios in 1979.

Zhuang explains that Meng had started a small art club during the "cultural revolution" (1966-76) and its members included students from the school and amateur art lovers from around the city.

The movie, Zhuang adds, was widely screened and had a big impact on China's art education at that time.

The alumni of the former Shanghai Institute of Fine Arts (now the Shanghai Academy of Fine Arts) got hold of a copy of the film and converted it into a digital format. The documentary was projected at the exhibition, and a scene from the film was also reenacted on the opening day of the exhibition. Part of the show space was converted into a temporary classroom where art students sketched, providing a glimpse into what China's art education was like in the 1960s and '70s, Zhuang says. 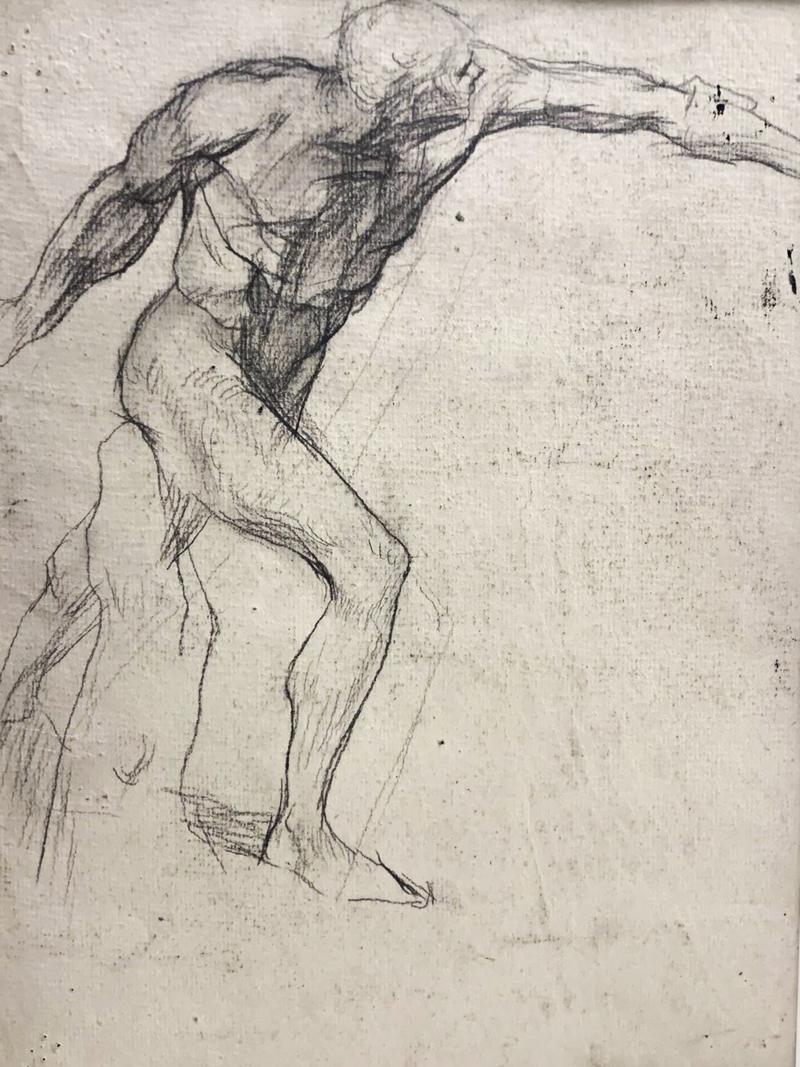 A sketch by Chen featuring a discus thrower. (PHOTO PROVIDED TO CHINA DAILY)

Although the Shanghai Institute of Fine Arts was founded in 1959, the teaching of Western art in Shanghai started as early as the 1800s. When Chen Yifei enrolled in the pre-college program of the school in 1960, he was taught anatomy and sculpture by Zhang Chongren, a sculptor and painter who used to study in Belgium and was a friend of Herge, the Belgian artist who created Tintin.

Yan Wenliang, the founder of one of the first modern art schools in China, the Suzhou Art Academy in 1922, also taught Chen Yifei how to use colors.

When he was alive, Chen Yifei used to imitate Yan's teaching in the Suzhou dialect and repeat his quotes such as,"What is dirty? Dirty is when things appear where they should not be."

Anecdotes from his conversations with Yan are presented in short texts at the ongoing exhibition, alongside sketch books that present the student's drawings and the source references provided by the teacher.

Teachers like Yan helped students like Chen Yifei to develop solid techniques and sensitive aesthetic perception, which transcended the realism style that dominated China's art education back then. Later on, when Chen Yifei joined the Shanghai Oil Painting Studios (now the Shanghai Institute of Oil Painting and Sculpture), their influence was reflected in his paintings on the Chinese revolution. For example, in his 1972 painting Ode to the Yellow River, which depicts a Red Army soldier standing on a cliff overlooking the roaring river, Chen Yifei adopted the impressionistic use of colors.