Black Friday draws US shoppers but many shun stores for online 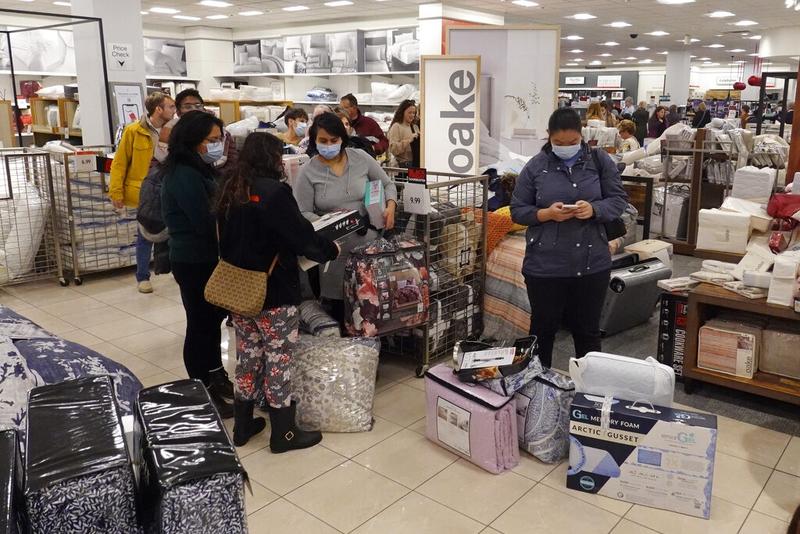 Customers wait in line to check out during a Black Friday sale at Macy's, Nov 26, 2021, in Indianapolis. (DARRON CUMMINGS / AP)

CHICAGO - Bargain hunters ventured out in chilly weather to buy Christmas gifts on Black Friday only to discover that many US retailers offered smaller price markdowns this year amid tight supplies.

COVID-19 fears and fewer "doorbuster" sales thinned crowds the day after the US Thanksgiving holiday, which kicks off the year-end holiday shopping season.

On the same day, the World Health Organization named the newly identified Omicron variant of the coronavirus as a "variant of concern," triggering worldwide alarm and a selloff in the US stock market.

COVID-19 fears and fewer "doorbuster" sales thinned crowds the day after the US Thanksgiving holiday, which kicks off the year-end holiday shopping season

Stores on Black Friday had the lowest level of clearance goods for sale in five years or more, Cowen analysts said in a note. Many shoppers chose to pick up merchandise curbside rather than venturing inside stores.

Black Friday retail sales are up 29.8 percent versus 2020 through 3 pm ET, according to Mastercard SpendingPulse.

Consumers spent $6.6 billion up until 9 pm ET on Friday, according to Adobe Digital Economy Index, which expected total spending of between $8.8 billion and $9.2 billion for the day.

Walmart and Target stood to outperform other retailers in part because of their buy-online-pick-up-at-store services, Cowen said. Target added more than 18,000 "drive-up" parking spaces, more than doubling spots versus last year. The company said its most popular Black Friday deals included $219.99 for a KitchenAid professional stand mixer that regularly sells for $429.99, and savings of up to $60 on Apple Watches and AirPods. 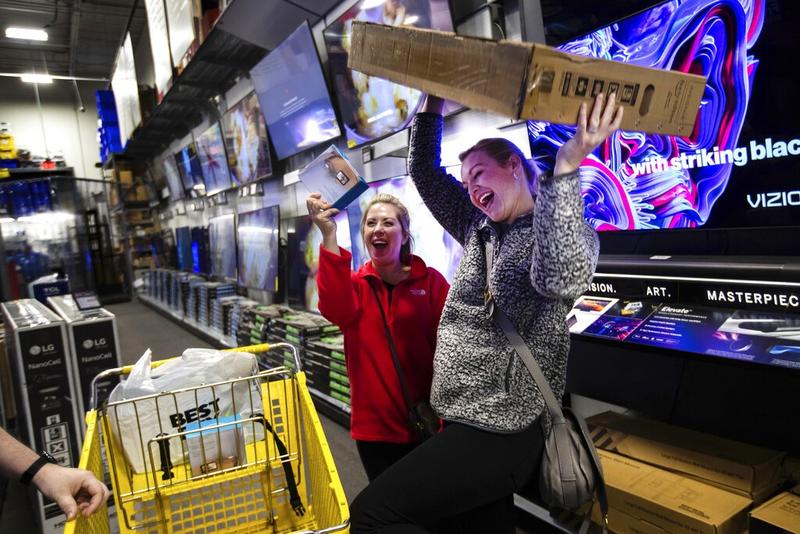 Jennifer Beecher, left, and her sister-in-law Ashley Beecher, right, enjoy going shopping on Black Friday at Best Buy, Nov 26, 2021, in Houston. This year is the first time the pair has arrived before dawn to go out to shop. They were at Best Buy making purchases for their family's business Christmas party. (MARIE D. DE JESUS / HOUSTON CHRONICLE VIA AP)

Several retailers – including Walmart, Target and Best Buy – are expected to post lower fourth-quarter profit margins because of tight inventory and higher costs for raw materials, freight and labor. "Even though the holiday season should be okay from a sales standpoint – because retailers are discounting less – the margins won't necessarily be higher because of inflation," said Forrester Research analyst Sucharita Kodali.

Retailers had lured shoppers to make holiday purchases as early as September this year, because the supply chain logjam has prevented them from quickly replenishing year-end merchandise

US consumers are entering the holiday season flush with cash thanks to a still-hefty pile of savings from multiple rounds of government pandemic relief and double-digit wage increases as businesses compete for workers. Yet retailers had lured shoppers to make holiday purchases as early as September this year, because the supply chain logjam has prevented them from quickly replenishing year-end merchandise.

A Deloitte survey showed people had spent 80 percent-85 percent of their holiday gift budgets even before Black Friday. For November and December, online sales are estimated to hit a record $207 billion, up 10 percent from last year, according to Adobe Digital Economy Index. The National Retail Federation has forecast combined brick-and-mortar and online holiday sales to reach between $843.4 billion and $859 billion, 8.5 percent to 10.5 percent higher than last year.

ALSO READ: Black Friday gets busted by virus in sign of retail's future

Elver Gomez, a 21-year-old student in Chicago, said he didn't find the Apple and Microsoft laptops he wanted while shopping at a Best Buy store Friday morning. "It seems like this year it's either out of stock" or for sale at what he said was "not that great of a price." Best Buy added a message to its website warning of "limited qualities" and "no rainchecks."

Electronics – in short supply due to a global chip shortage – had the highest out-of-stock levels, followed by personal care, and home and garden, according to Adobe. Through most of November, out-of-stocks were up 261 percent versus 2019.