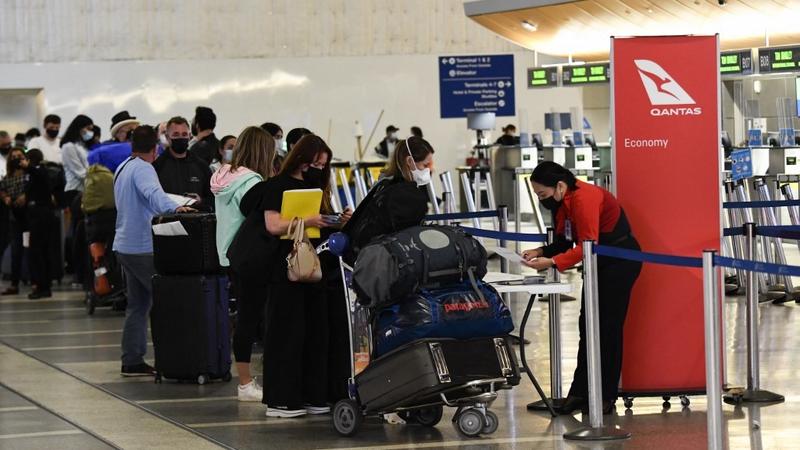 Travelers wait in line to verify their COVID-19 vaccination status as they check-in for a flight to Sydney, Australia on Qantas Airways Ltd inside the Tom Bradley International Terminal at Los Angeles International Airport on Nov 1, 2021 in Los Angeles, California, as Australia's international border reopens almost 600 days after a pandemic closure began. (PATRICK T. FALLON / AFP)

Alarmed by the variant, Britain temporarily banned flights from South Africa, Namibia, Botswana, Zimbabwe, Lesotho and Eswatini from Friday, and asked returning British travelers from those destinations to quarantine.

Singapore swiftly joined Britain, with the health ministry saying on Friday it would restrict arrivals from South Africa and countries nearby as a precaution.

Japan will tighten restrictions on travelers from six African countries after the discovery of a new COVID-19 variant in South Africa, the government's top spokesman said.

Starting Saturday, travelers who have recently been to Botswana, Eswatini, Lesotho, Namibia, South Africa, or Zimbabwe will be requested for a 10-day quarantine period in a government-designated facility upon their arrivals, Chief Cabinet Secretary Hirokazu Matsuno announced at a press conference.

READ MORE: What we know about the new coronavirus variant now spreading

After easing some of its travel restrictions earlier this month, India's central government issued an advisory to all states to rigorously test and screen international travelers from South Africa and other "at risk" countries.

Asian countries have fared better than those in other regions in containing the pandemic by enforcing strict preventive measures, rigorous testing and strict border controls.

Asked whether those plans would have to be delayed due to the new variant, Ardern said the country had "a number of inbuilt measures to act as a layer of protection."

"All of our planning around COVID, we have built into it the possibility of variants in the future," Ardern said in an interview for the upcoming Reuters Next conference.

Australia on Friday said it was investigating the newly identified COVID-19 variant spreading in South Africa and warned it may close its borders to travelers from the African nation if risks from the new strain rise.

South African scientists are concerned the new variant could evade the body's immune response and make it more transmissible as it has a "very unusual constellation" of mutations.

Australia Health Minister Greg Hunt said he would swiftly respond if the World Health Organization classifies it as a major new variant.

Australian retailers recorded their best month of sales in nearly a year as consumers took advantage of the easing of protracted lockdowns and building momentum in the economy for the final quarter.

Sales surged 4.9 percent in October from a month earlier, when they rose 1.3 percent, and more than doubled economists’ forecast of a 2.2 percent gain, according to the Australian Bureau of Statistics.

The state health department reported 1,254 new COVID-19 cases and five deaths on Thursday. There are now 10,276 active cases across the state with 310 hospitalized.

Cambodia's COVID-19 case total has risen to 120,009 on Thursday after 32 fresh infections were confirmed in the last 24 hours, the Ministry of Health said in a statement.

The new infections included 25 domestic cases and seven imported ones, the MoH said, adding that four more fatalities were recorded, taking the overall death toll to 2,918.

MoH's secretary of state and spokeswoman Or Vandine said that as of Nov 24, the kingdom had administered at least one vaccine dose to 14.11 million people aged five years old and above, or 88.2 percent of its 16-million population. 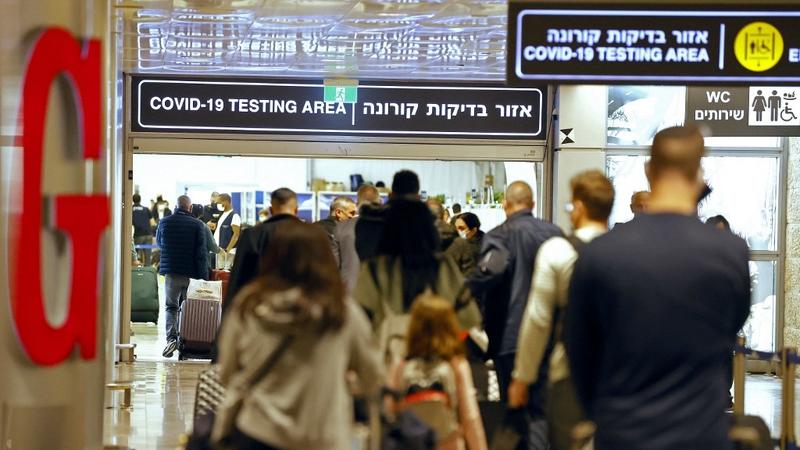 Passengers walk with their luggage upon their arrival at Ben Gurion Airport near Lod on Nov 1, 2021, as Israel reopens to tourists vaccinated against COVID-19. (JACK GUEZ / AFP)

Israel announced on Thursday a ban on entry of travelers from seven African countries, after a new COVID-19 variant was detected in South Africa.

Israeli citizens who return home from trips to these countries will need to stay in a designated quarantine motel for seven days, even if they are fully vaccinated, it said.

They will be released after two negative PCR tests. Travelers who refuse to be tested will need to stay in quarantine for 12 days, according to the statement.

Scientists in South Africa said they have detected the new COVID-19 variant and are still studying its implications.

Lebanon on Thursday registered 1,510 new COVID-19 cases, raising the total number of infections in the country to 663,779.

Meanwhile, the total death toll from the virus in Lebanon went up by nine cases to 8,685, the Lebanese Health Ministry said.

Lebanese authorities have been urging the citizens to register for vaccination amid the recent surge in COVID-19 cases, which resulted in an increase in registration to 55 percent from 50 percent earlier this month.

Lebanon has been fighting against the pandemic since Feb 21, 2020.

The New Zealand Police and all New Zealand Defense Force staff have become the new groups required to be vaccinated in preparation for the transition to the new COVID-19 Protection Framework on Dec 3.

First doses of the vaccine for workers in these organizations are required by Jan 17, 2022, and second doses by Mar 1, 2022, Workplace Relations and Safety Minister Michael Wood said on Friday.

These groups are added to the list of sectors covered by vaccination, which includes Managed Isolation and Quarantine and border work, healthcare, education and prisons.

Vaccine requirements have been extended to include constabulary, recruits and authorized officers of New Zealand Police, and the armed forces and civilian staff of the New Zealand Defense Force, Wood said in a statement.

New Zealand reported 173 new Delta variant cases of COVID-19 in the community on Friday, bringing the total number of confirmed cases in the country's current community outbreak to 7,832.

Among the new infections, 154 were recorded in the largest city of Auckland, 15 in nearby Waikato, one in Northland, two in Bay of Plenty, and one in the Lakes District Health Board, according to the Ministry of Health.

The total number of confirmed COVID-19 cases in New Zealand stands at 10,598 currently, according to the health ministry.

ALSO READ: 2.5% of NZ people get jabbed in 1 day in drive to live with virus

After a nearly two-year hiatus from the COVID-19 pandemic, the tourism industry in the Palestinian city of Bethlehem in the West Bank is now eager to have its activity revived, as the Ministry of Tourism decided to resume the reception of tourist groups on Nov 6.

Sami Thaljieh, manager of the Santa Maria Hotel, is busy preparing his crews to receive local and foreign tourists. Thaljieh told Xinhua that hotel owners and workers are all looking forward to seeing their conditions improved after the ministry's decision.

Many reservations, both domestic and abroad, have been made for Christmas and other upcoming holidays.

In a bid to help the tourism industry, the Ministry of Tourism launched a specialized training program entitled "We Are Ready," which aims at preparing workers in the industry to receive tourists under preventive and precautionary measures.

Bethlehem Governor Kamel Hamid said his city has the ability to revive with the efforts of the workers in the tourism industry.

The Philippines will reopen to foreign tourists from low-risk areas during the first two weeks of December, as it monitors the new coronavirus variant identified in South Africa.

The Philippines' Department of Health reported 975 new confirmed cases of COVID-19 on Thursday, bringing the total tally to 2,829,618. 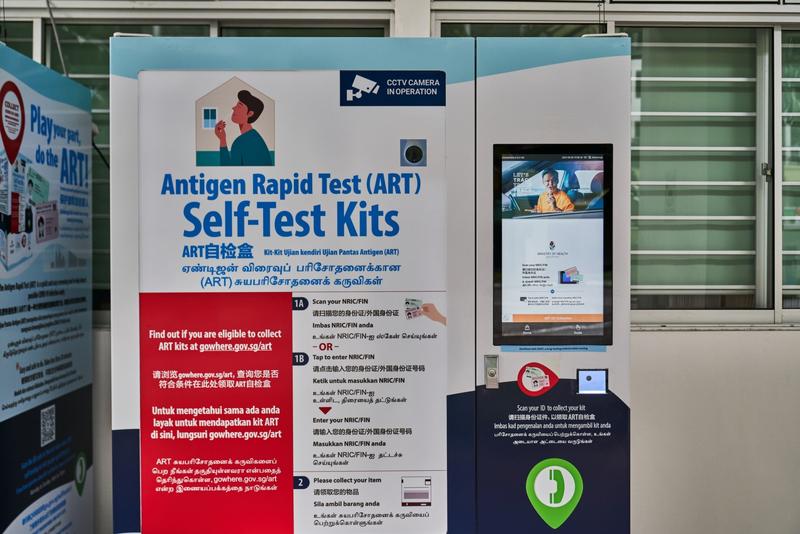 Singapore reported the lowest number of cases found in the community since Sept 25, according to the Ministry of Health. The city-state detected a total of 1,275 new infections as of noon Nov 25, down from 2,079 on the previous day.

Of the new cases, 1,228 were reported in the community and 31 in migrant worker dormitories, while 16 were imported cases.